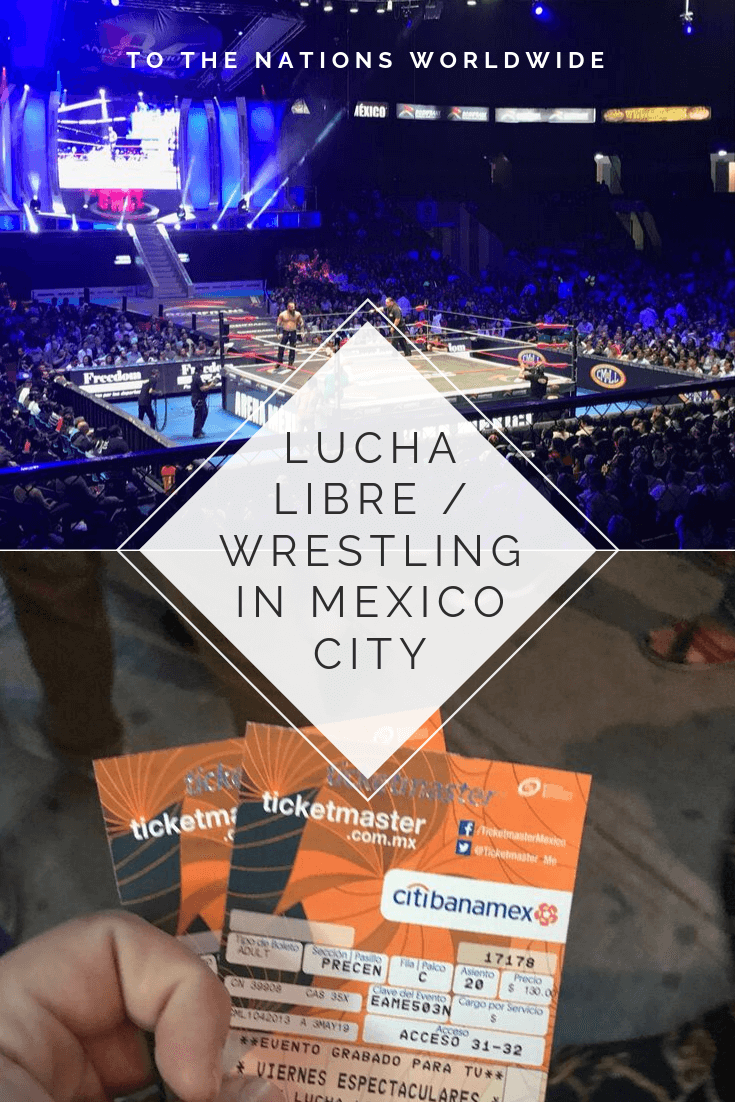 What could be more Mexican than Lucha Libre?

Well I can think of a lot of things, but this was at the top of my list of things to do while in Mexico City. To see the wrestlers of Mexico City go at it in a ring surrounded by adoring fans is just what I wanted for a night out.

We were not disappointed by this decision and it should be at the top of anyone’s list when visiting Mexico City for an authentic night out on the town.

Lucha Libre is wrestling that originated in Mexico in which the luchadors (wrestlers) compete much like wrestlers would in the WWE with acrobatic maneuvers. These luchadors wear their own mask that becomes their identity. This makes for an incredible show to attend at night in Mexico City, a city which embraces the show with chants and cheers for their favorite wrestlers.

Growing up I was a fan of watching wrestling on TV and fell in love with the showmanship of these wrestlers and the story behind each match. It was in middle school in which I fell out of this spell and never thought much back to wrestling. Until I knew I was visiting Mexico and knew I had to make it to a Lucha Libre match.

Sure enough, the show was everything I had hoped it would be and so much more. It is so easy to get caught up in the hype of the crowd and begin cheering for your favorite wrestler. The show that is put on by the entertainers is intoxicating. Whether you are a fan of wrestling or not, this is such a great way to spend a night if you are looking to have a drink and a show in Mexico City.

There are two main places which you can see a Lucha Libre match, Arena Mexico and Arena Coliseo. The later is closer to the Historic City Center, so if you have a day planned there you may want to see if there is a wrestling match on that night so you can enjoy a night event after touring the area. If you are looking for things to do in the Historic City Center check out our post on our walking tour of the area.

Arena Mexico is closer to where we were staying which was in the Condesa area. Being in the Doctores area, the arena is about a $50 peso Uber from Condesa. We took advantage of using Uber to get around everywhere we wanted to while in Mexico City. It is safe and extremely affordable.

Arena Mexico does not look like a typical arena from North American standards. From the outside you will see several stalls on wrestling night selling Lucha Libre masks and food. There is a lit up sign where pointing you where you purchase tickets and then an entrance lined with security guards checking you before you proceed into the building.

The inside of the building looks more like an arena with the wrestling ring surrounded by rows upon rows of seats with no bad seat in the house as the upper levels of the arena were not filled.

Once you arrive, you need to purchase your tickets. We went to a match on a Friday and arrived less than half an hour before the match began and had no problem purchasing tickets. However, the match did look sold out based on no one being in the upper levels of the arena.

Tickets are purchased in a jail-like lineup with a lit up sign stating “Taquillas – Arena Mexico” with an arrow showing the entrance to the ticket lineup. We waited in line for less than ten minutes and asked for tickets in English and if they could help us. The lady behind the counter was able to speak to us in broken English to let us know the tickets that were still available and we chose the cheapest of the options as she said they were still good seats and that they were in fact seats and we would not be standing.

Tickets for the least expensive seats cost us $130 pesos each. The show began at 9:30 p.m. and ended at 11:30 p.m. Two hours of entertainment was well worth the price of admission. 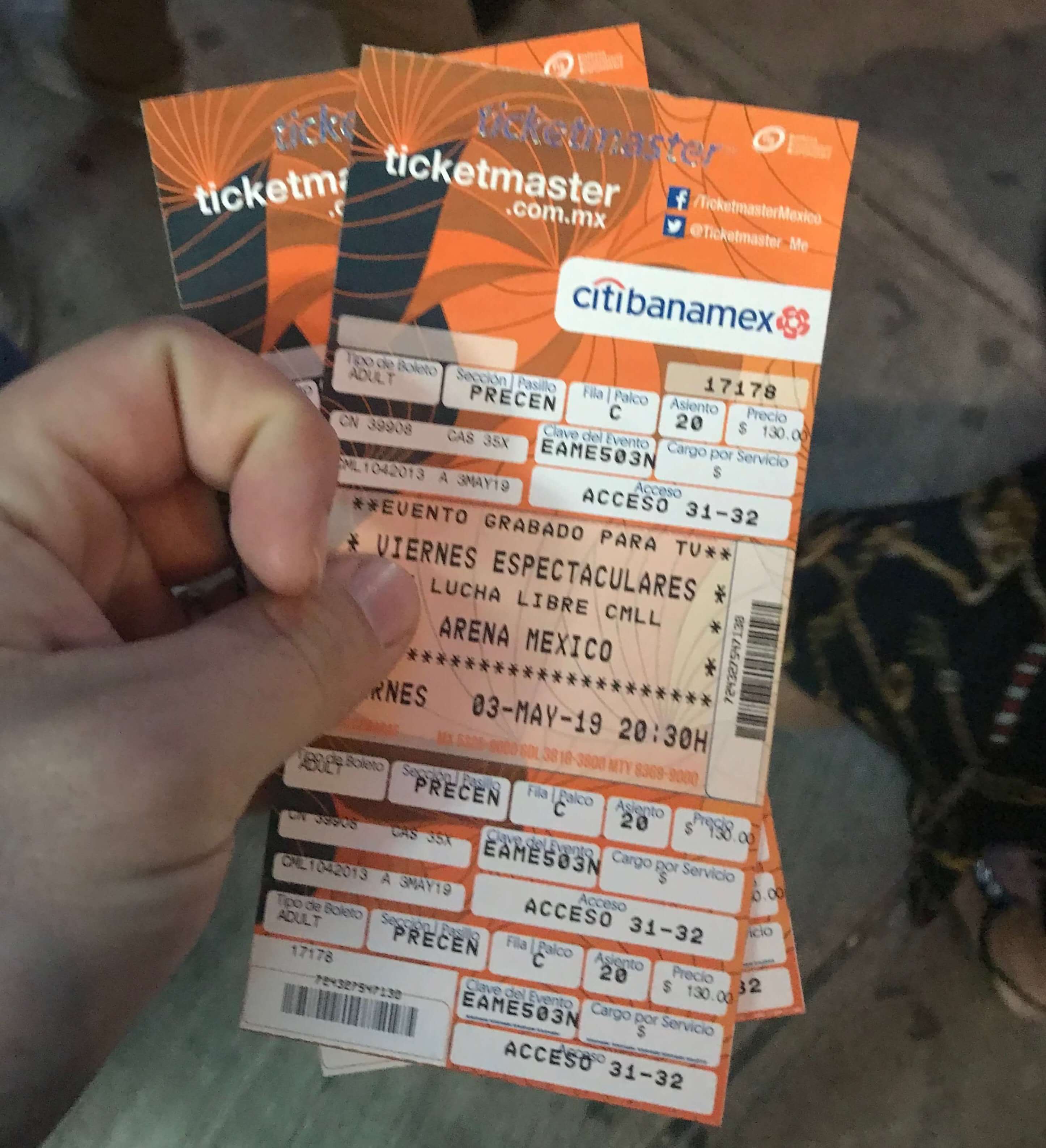 Once you have your tickets in hand, it is time to get your Lucha Libre mask. This is completely option, but it was something we wanted to have to cheer on our wrestlers. We settled for the ones you see in the photos and paid $100 pesos each.

With tickets in hand you walk to the entrance where security is waiting to check your pockets. Bags are not permitted and we did not try to bring our cameras and were happy with just having our iPhones to take the photos and video we could.

Upon entering past security we walked up stairs to the upper section of the arena where there are concession stands and runners that will meet you, see your tickets, and take you directly to your seat. They do this for a tip so be sure to have some pesos on hand for them. People will also take your orders from your seat and run to get your food and beverages for a tip so feel free to get comfortable at this stage of the show.

The amount of flips, twists, and jumps we saw the luchadors undertake in their attempt to bring the crowd to their feet in a thunderous roar of applause is unbelievable. Considering the match we were seeing was not a big card event, we were extremely impressed by the athletic nature of these luchadors.

Each luchador comes out from behind the stage and walks down to the ring with their own theme and a video playing in the background to bring the crowd to cheers or to boos to show their support or lack-thereof for the luchadors.

It was evident which team was the crowd favorite throughout these matches, especially for the last match where the main wrestler was the most acrobatic and athletic of all the participants. Each match had three rounds and they all seemed to follow the same flow of the crowd favorite losing the first round and then coming back to win the next two even though it seemed like they were on the verge of losing. There was one match that did not follow this format with the crowd favorite getting a surprise kick to the man parts to put them out of the match.

Though predictable, the luchadors sold it to the crowd and really got everybody into the show.

Instead, this needs to be added to an itinerary and show times researched in advance to make sure that you are not going to miss this chance to see the luchadors put on a show of a lifetime in front of your eyes.

Go into these matches with an open mind. Pick your favorite wrestler or team of wrestlers from the beginning of the match and lose your mind by cheering your support for them throughout the match. Join in with the locals around you and make friends while there.

The only thing that was not fun about our time at this event was when a child sitting behind us spilled water down my back TWICE and would not stop playing with the strings on my Lucha Libre mask. Still this did not disappoint me beyond enjoying the show.

Have you ever been to a Lucha Libre show? We would love to hear what you think of visiting one of these shows or if you have been to one what your experience was like. Leave a comment below!