To the Nations Worldwide Couple Travel Blog & Podcast
Home Asia Seoul, South Korea Budget Travel Itinerary
Traveling can be expensive. Even before you begin your travels, you have already spent the largest portions of your budget for your trip. Between the flight and hotel expenses, the biggest expenses have been paid for. However, your trip can still cost you a lot more than you expected.

Planning is key to this part of your budgeting. Knowing what you will spend and where on your trip will be very important to remaining within your budget. Here we have compiled a list of five things to add to your Seoul, South Korea budget travel itinerary.

Admission prices to attractions, transportation costs, and food can add to your budget drastically. These can all add up and put you over budget fast. Knowing what you can do for free, or almost free, can be nice on your wallet. However, you also want to make sure that these activities and attractions are also interesting to you. 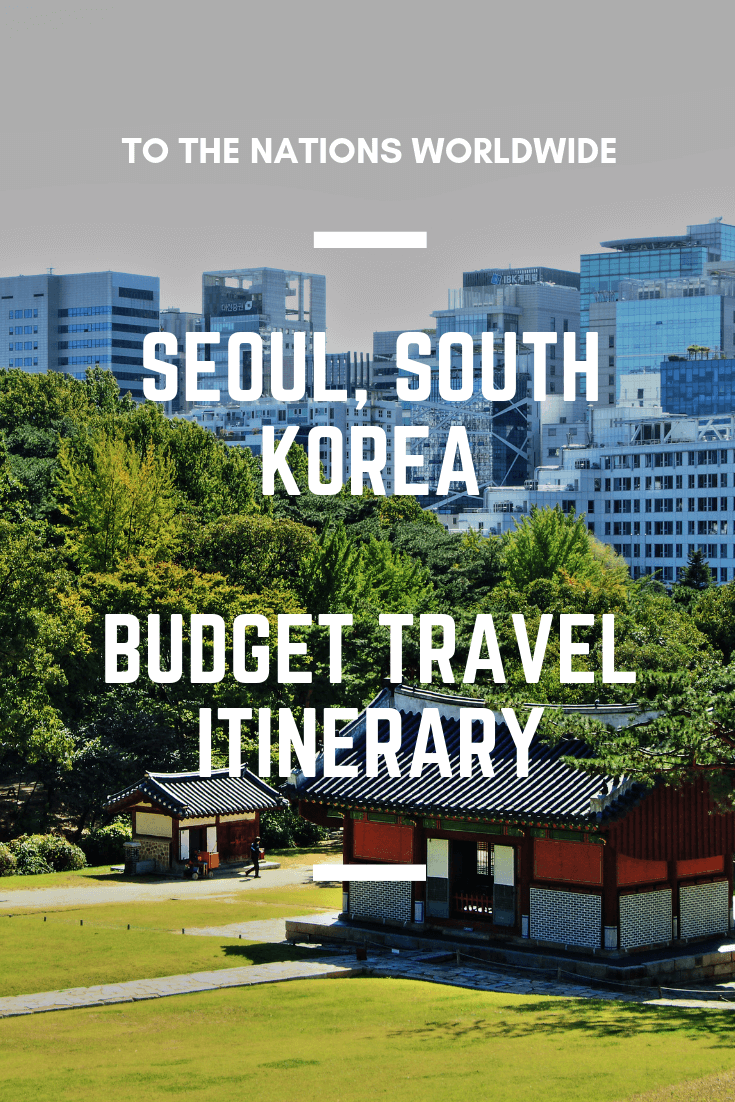 We put together a handful of things that you can do when you are in Seoul, South Korea that will not break the bank. These are free or very inexpensive things to do to keep your budget down while visiting this beautiful city. If you are looking for a specific itinerary, here is a Seoul 5 day itinerary.

Seoul on a Budget

The city of Seoul is a very bike friendly place. There are designated bike paths on most sidewalks. The best place to take your bike for a scenic ride is along the Han River that flows through the middle of the capital city. Biking along the river allows you to see the different architecture of the city, the mountains that surround the city, and gives you a great exercise. 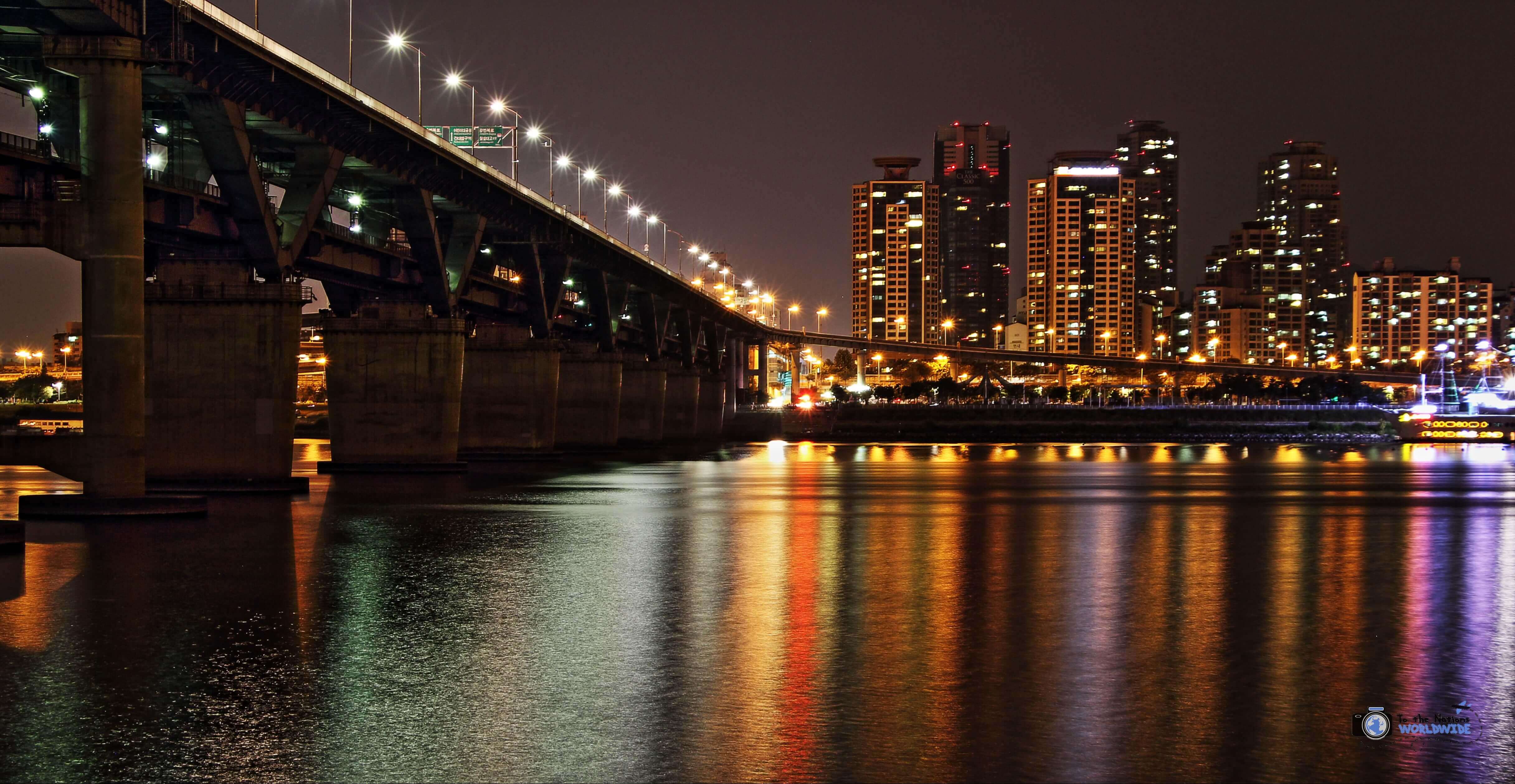 Also, along the river are convenience stores where you can enjoy a drink or food outside when you stop for a break. Many families make a day of their trip to the Han River, setting up a tent, having a barbecue, and playing sports in the grassy fields around the river. Some places allow you to rent paddle-boats or other water sports, although most people would choose to not go into the water. Walking along the Han River is completely free, biking will cost you a rental charge, and it is a great way to spend a day in the sun.

Besides the Han River, Olympic Park is another great place to bike through as it is a massive green space in the city that you can tour around on a bike. There are various bike rental places in the city and along the Han River. The most convenient place to rent a bike is outside Heukseok Station on the metro. And once you are done with your hike or biking, you can get some work done at one of the many cafes the city has to offer. 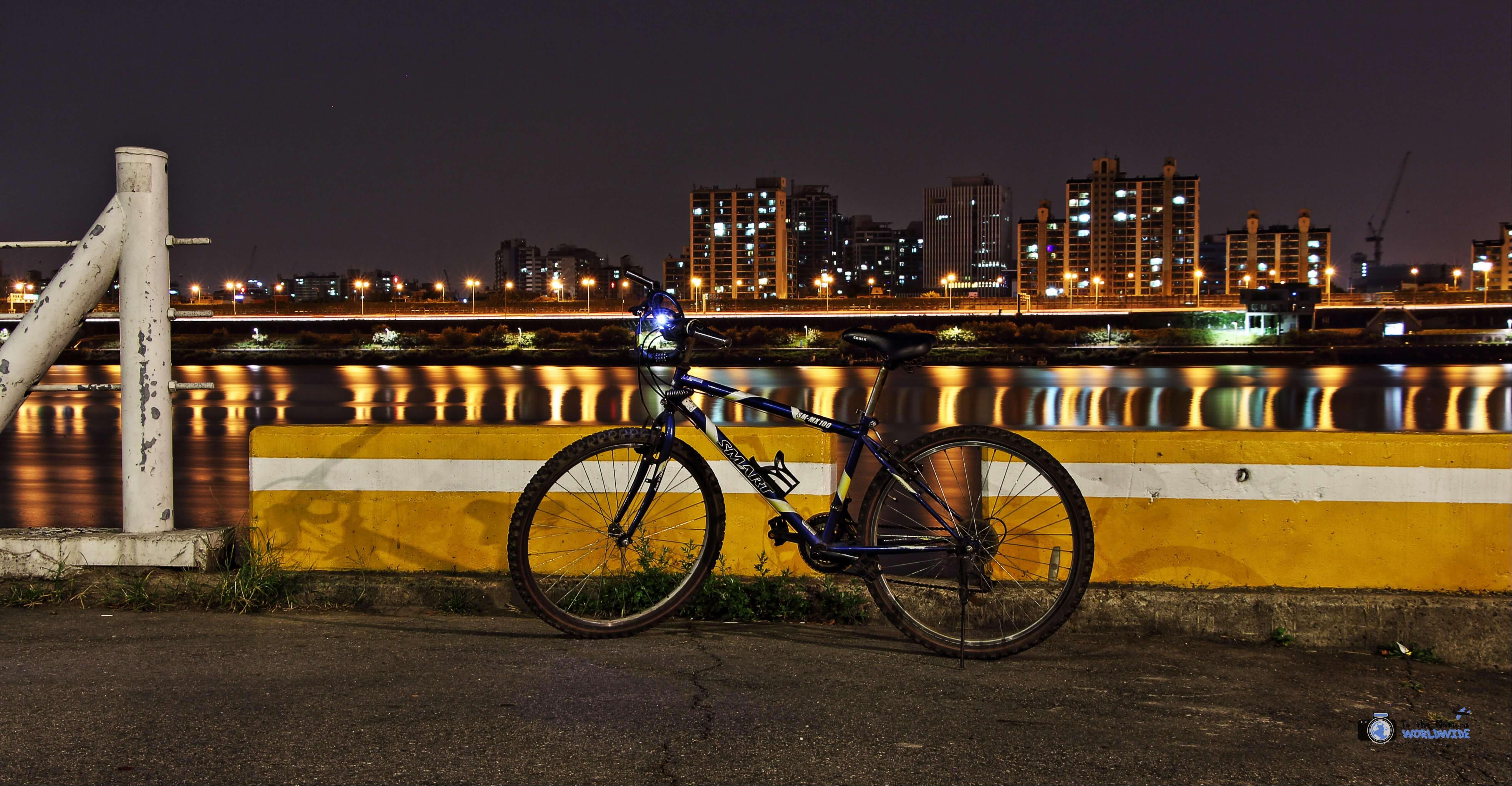 Many of the palaces and temples can be free to see, or cost very little in admission costs. It is an excellent look into the history of the city, the traditional Korean architecture, and the culture of Korea. Sometimes traditional performances will occur around these attractions. The most famous of these royal palaces, Gyeongbokgung, is free to walk around the entrance gates and just 3,000 KRW (less than $3 USD). At such an inexpensive admission price, the royal palaces and temples are worth adding to your itinerary when in Seoul. 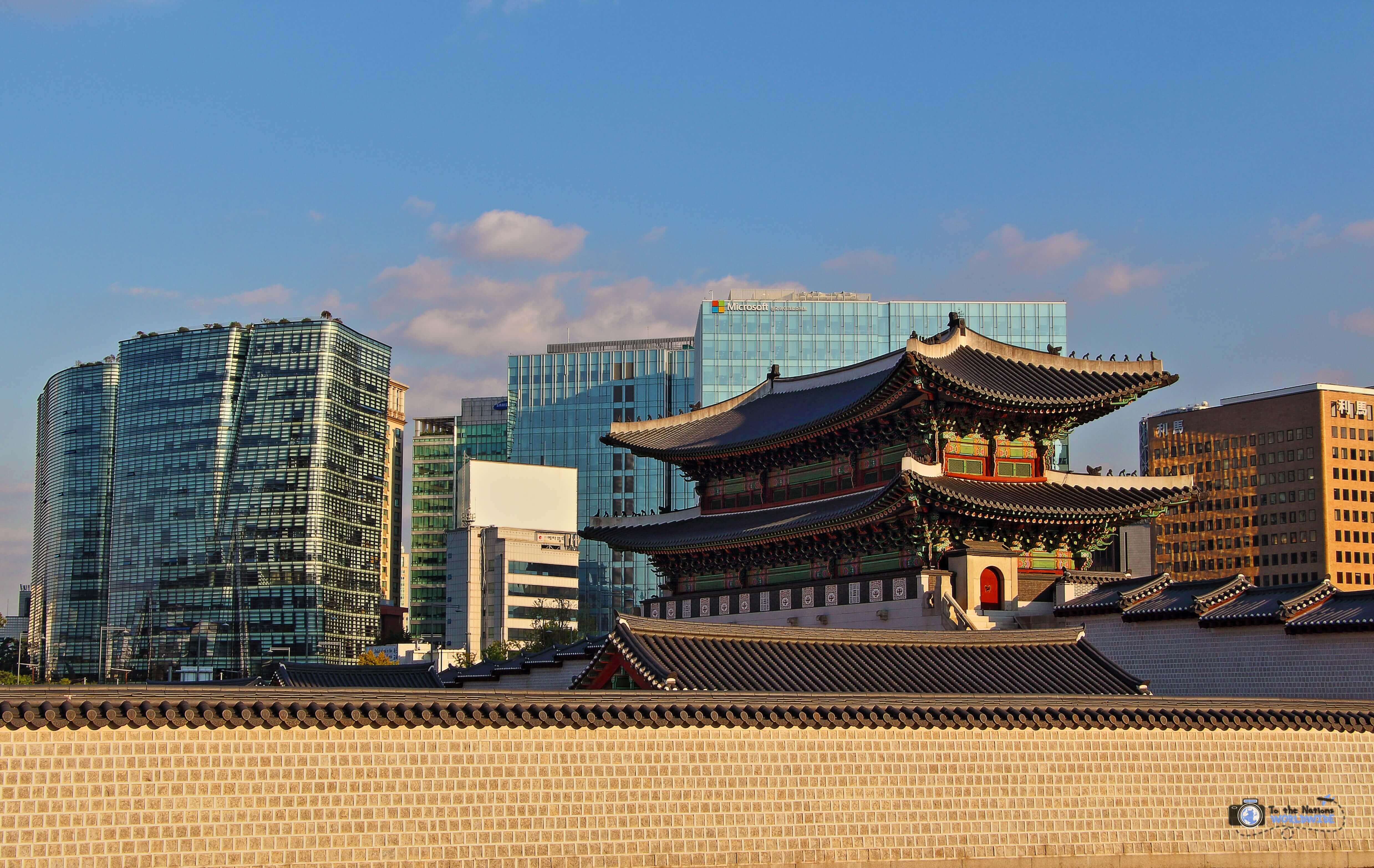 Olympic Park is a great place to visit for an afternoon. It is a massive park in the Songpa district. You can see the Olympic monument and eternal flame underneath it. Also, see the country’s flags that participated in the 1988 Olympics and their mark they left in Korea. 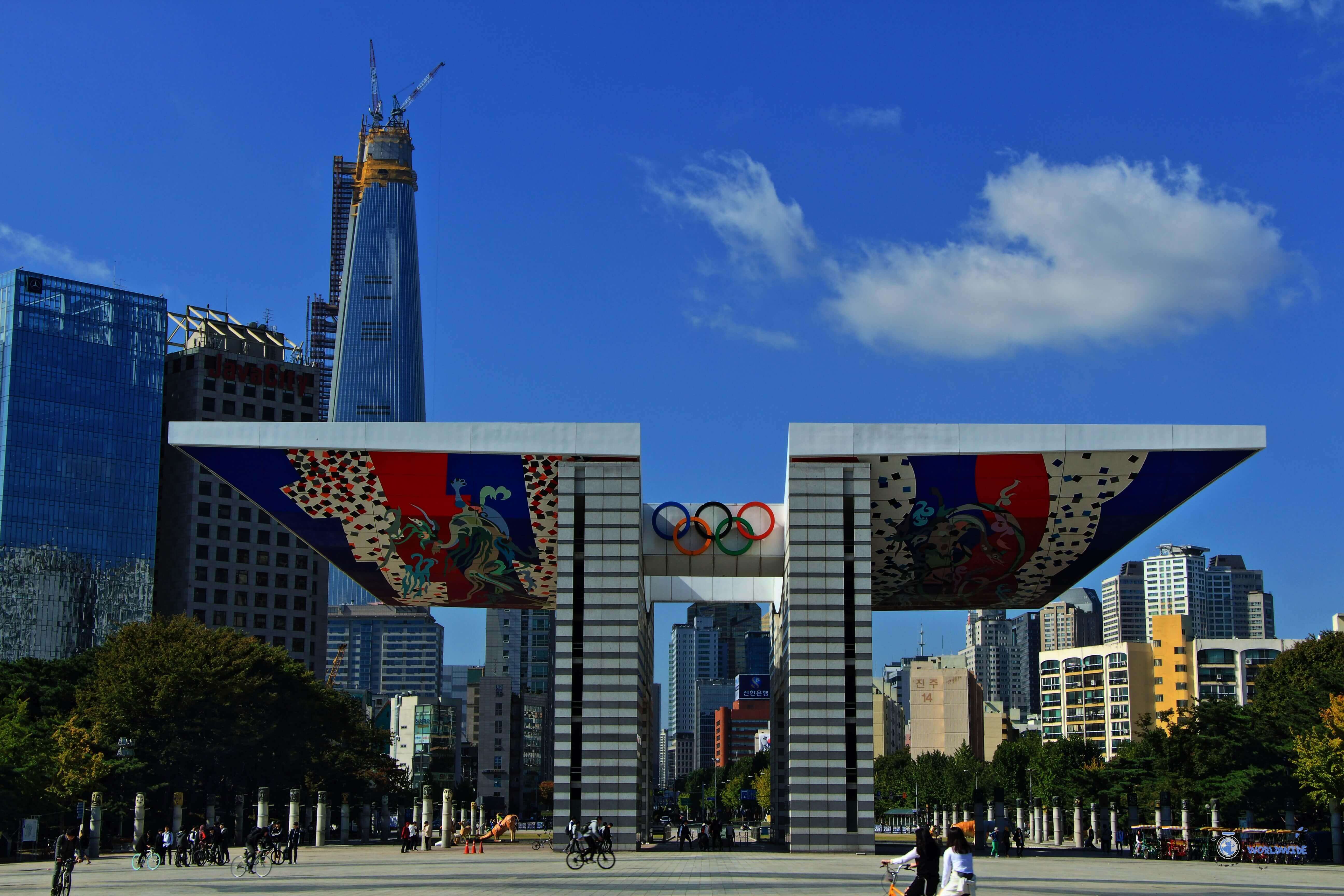 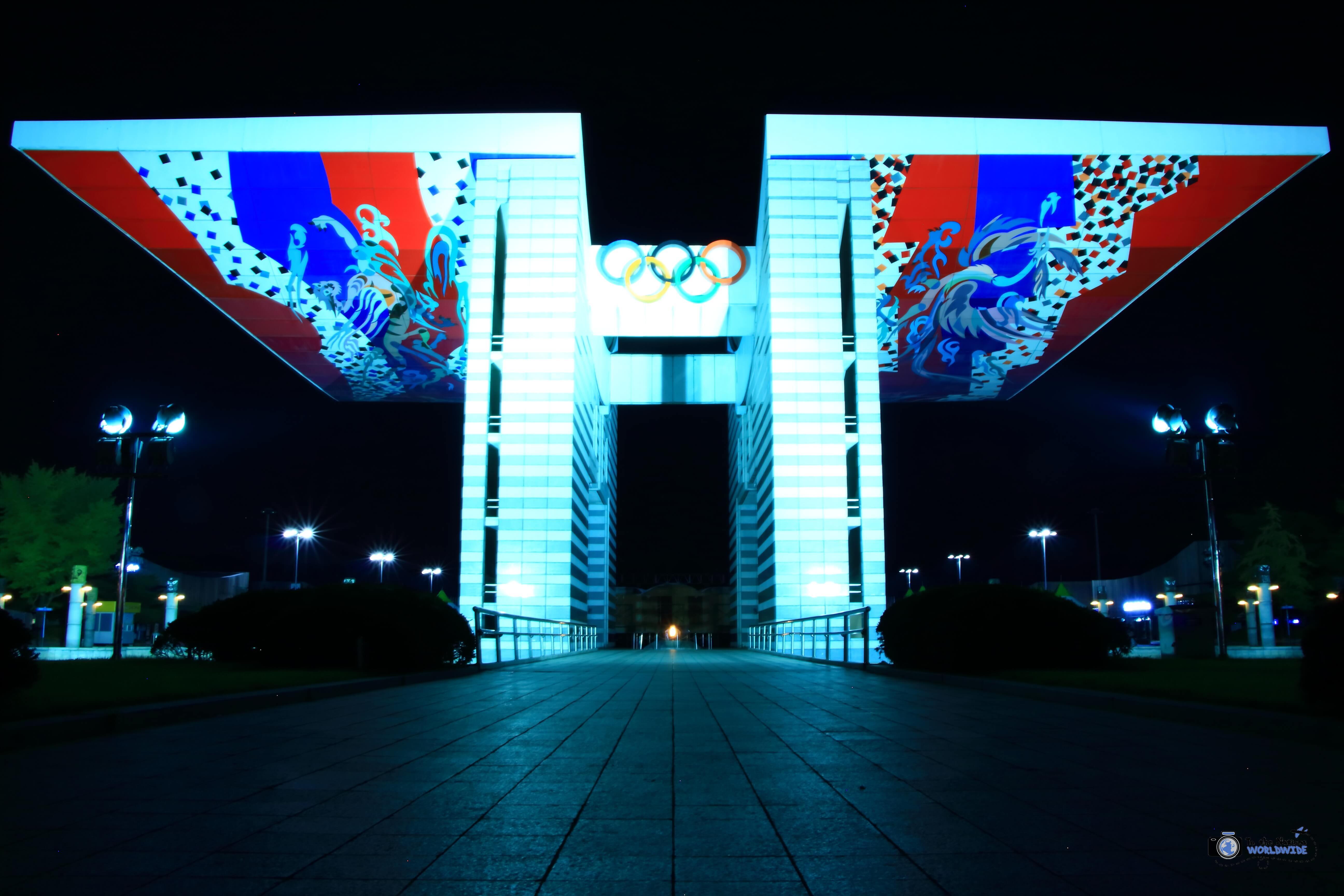 There are numerous museums throughout Seoul, but the one we enjoyed the most was the War Memorial Museum. This was an amazing experience that illustrates the military history of South Korea and the Korean War. Beginning outside, there are various vehicles and weaponry on display, magnificent architecture, and monuments to remember the soldiers. On the inside is a detailed description of the war and many different items on display from the Korean side to the many different countries that came to the assistance of South Korea. It is a beautiful memorial to the war and the soldiers. This is a must-see attraction when in Seoul to understand more about the history of the country. Also, admission is free! Though do feel free to provide a donation at the entrance. 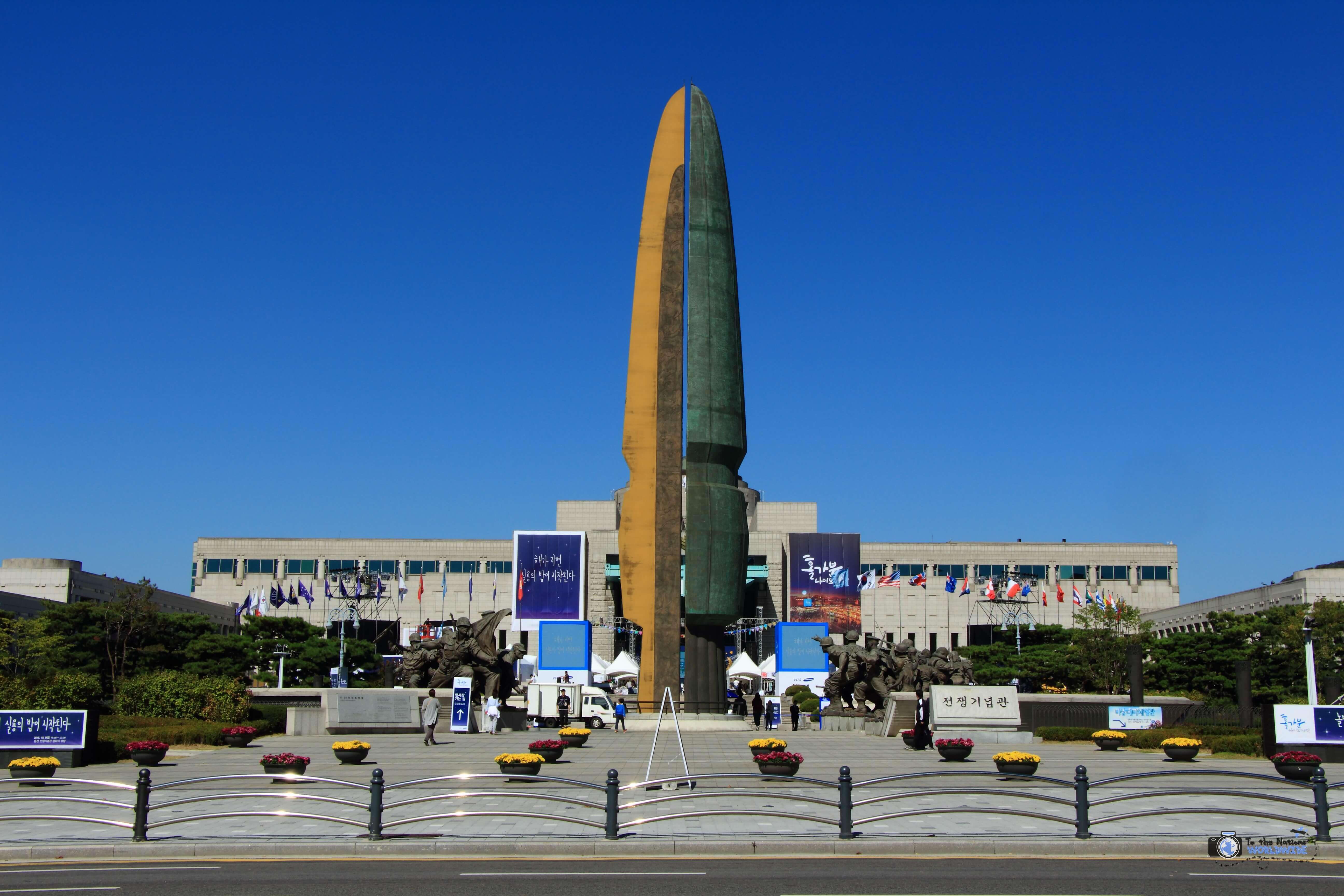 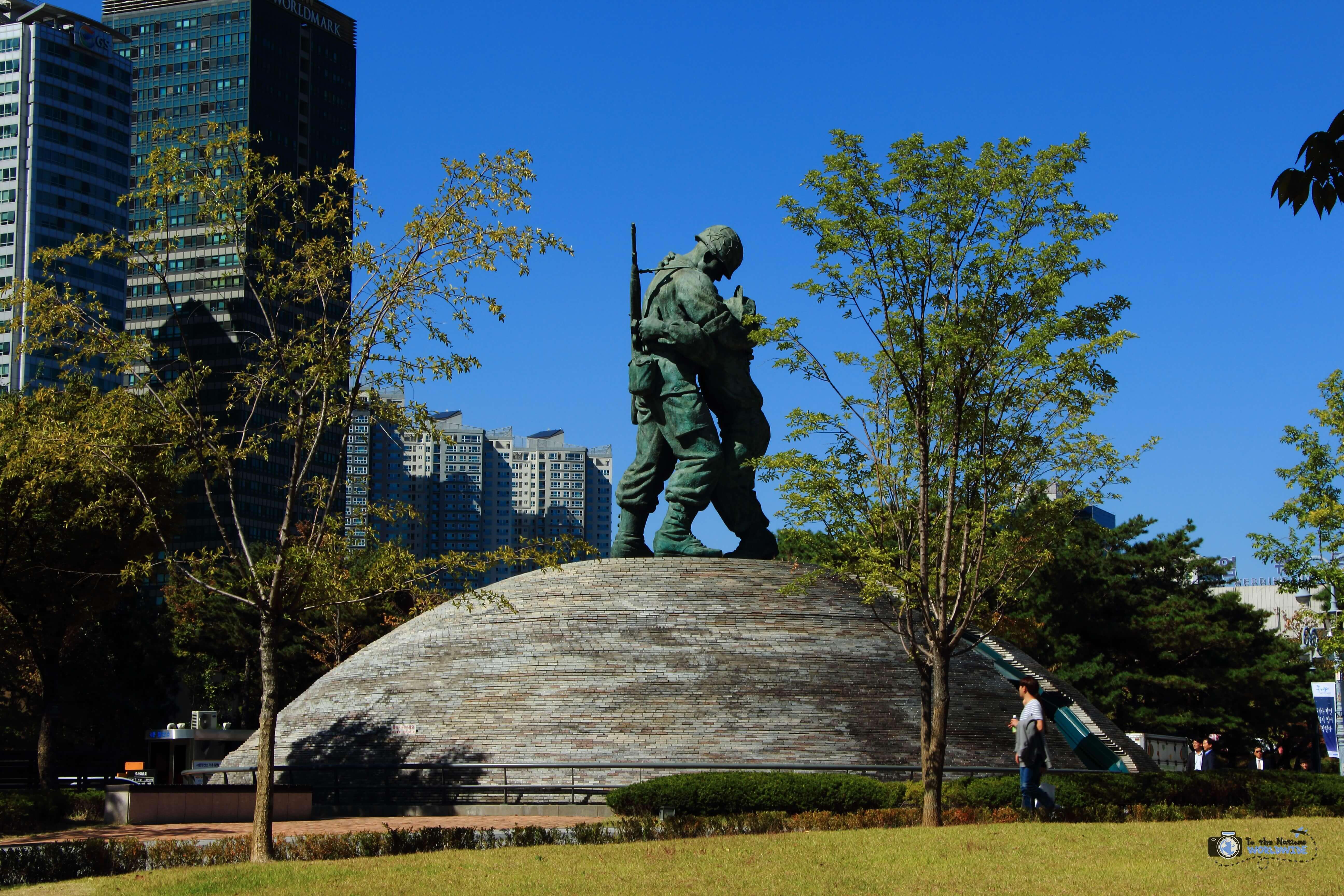 There are many popular neighborhoods in Seoul that are worth walking through. From hanok (traditional Korean homes) neighborhoods to the popular streets of Gangnam, there is no lack of these areas to discover. Gangnam is the center of fashion in Seoul, and the subject of Psy’s song Gangnam Style. Itaewon is the foreigner district near the United States military base. Hongdae is a popular district among younger crowds and is near the famous universities. Bukchon, near Gyeongbokgung, has a concentration of hanoks (traditional Korean homes).
Myeongdong is a popular shopping center with lots of street food. Insadong is a popular tourist shopping street. There are much more areas that are worth noting and exploring, but these are just a few worth checking out. 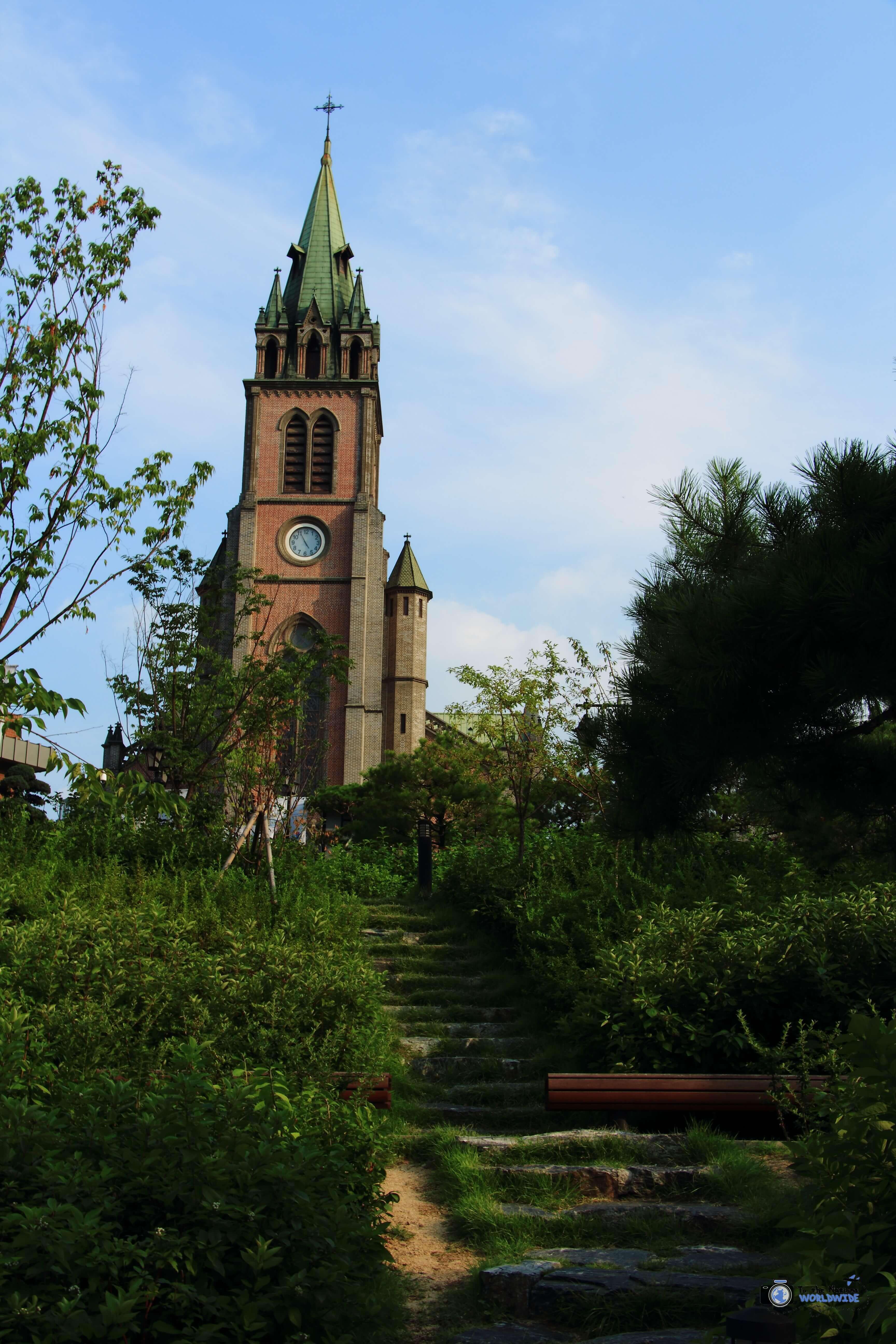 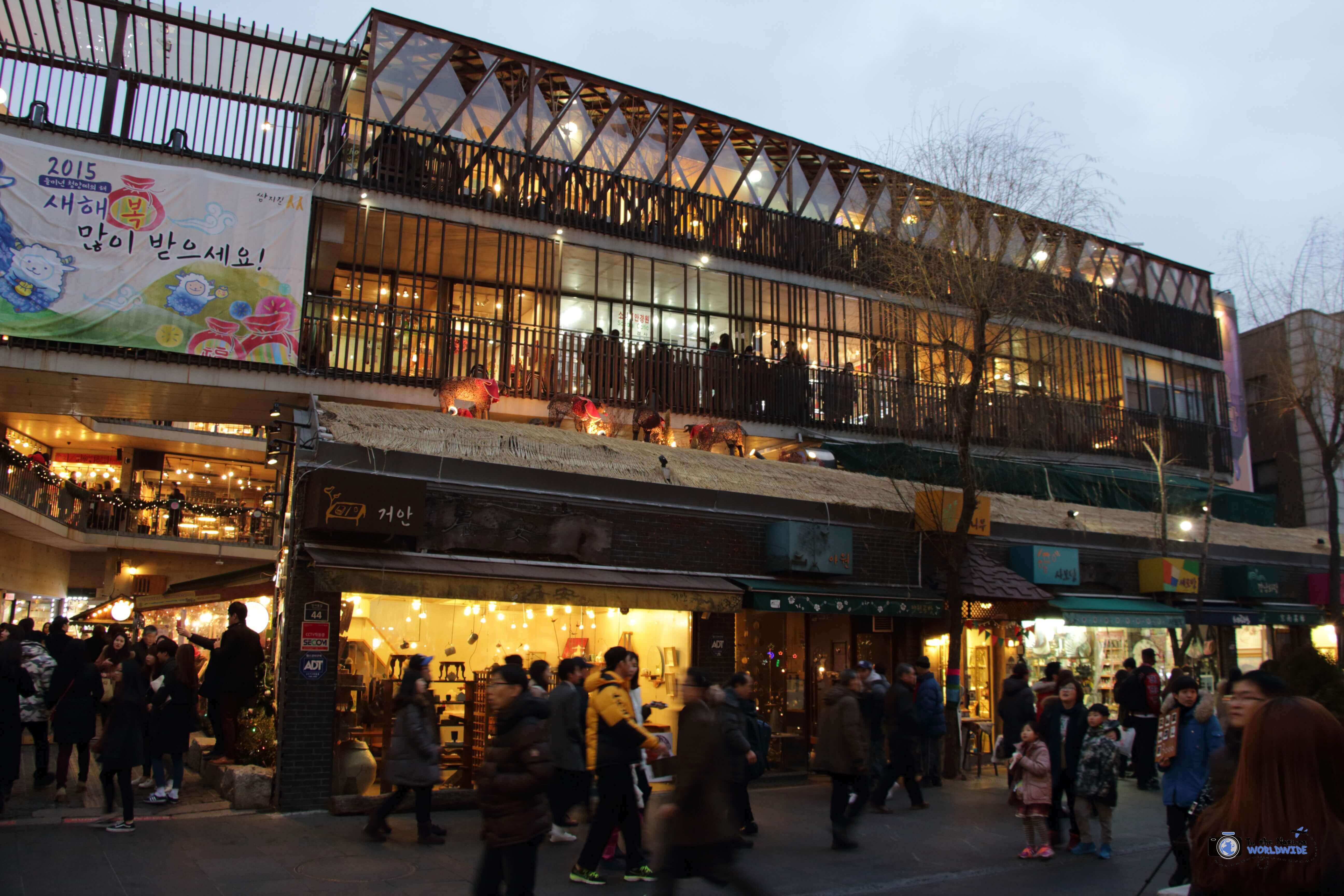 In addition to neighborhoods, markets are a great way to get a first-hand look at day-to-day life of someone involved in exchanging goods. Seafood markets are popular in Korea, and none is more popular than Noryangjin. It is a 24 hour seafood market that offers you insight into the life of people dealing with the seafood trade in Seoul. Walk around and take a look at the vast amounts of seafood, and how they are being sold and filleted. While your there, you can buy what you want and have a nearby restaurant cook it however you like. While you are there, try the sannakji or live octopus!

A popular pastime among Koreans and visitors alike in Seoul is hiking. This makes it a must add to your South Korea budget travel itinerary. The city is surrounded by mountains, each worth hiking to the summit to get a commanding view of the city from different viewpoints, as long as it is not a hazy day. Not only is this absolutely free for you to do, besides transportation and footwear, it is also a great way to spend a day. Search the different mountains, see what each has to offer, and choose your trail accordingly. You wont be disappointed. 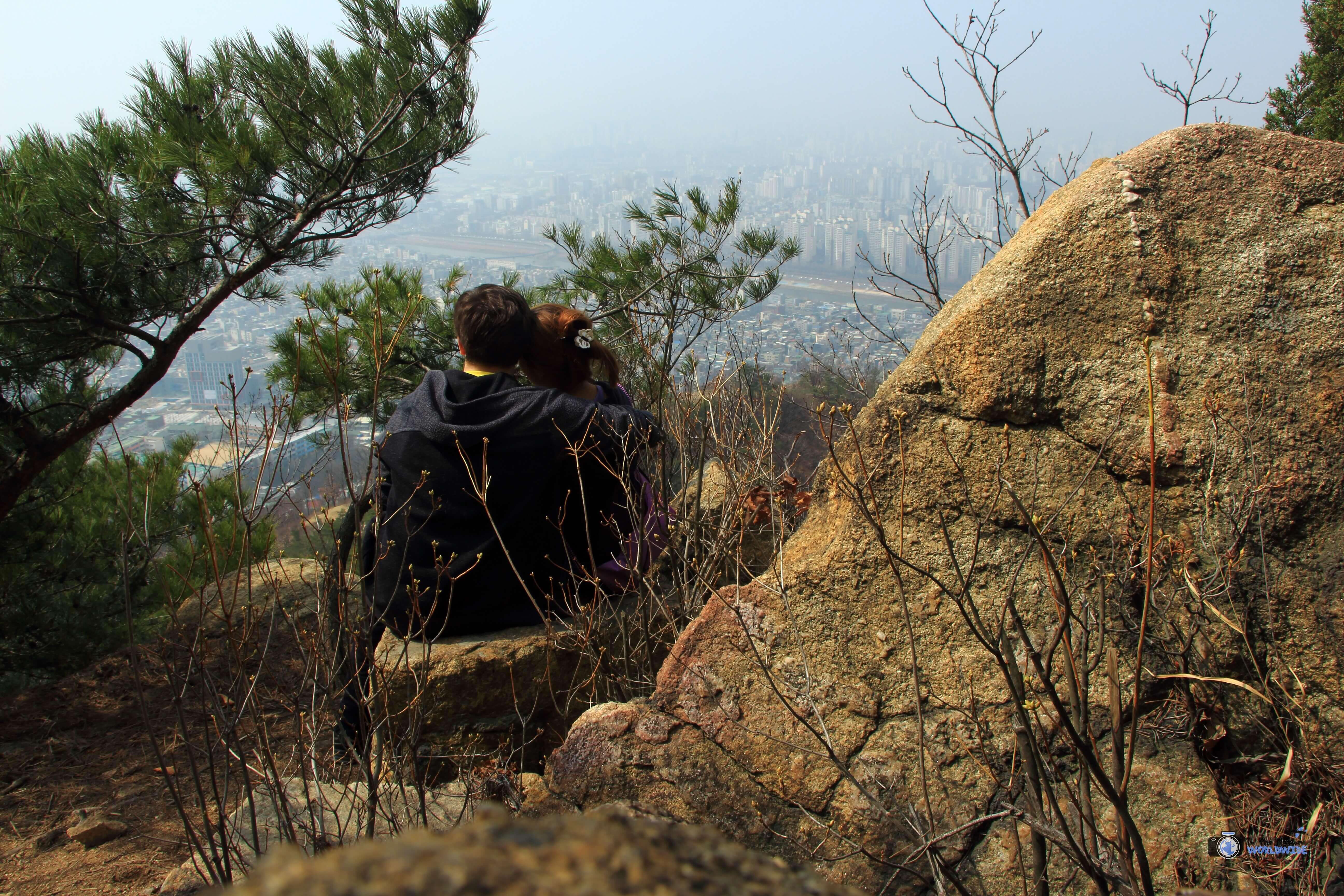 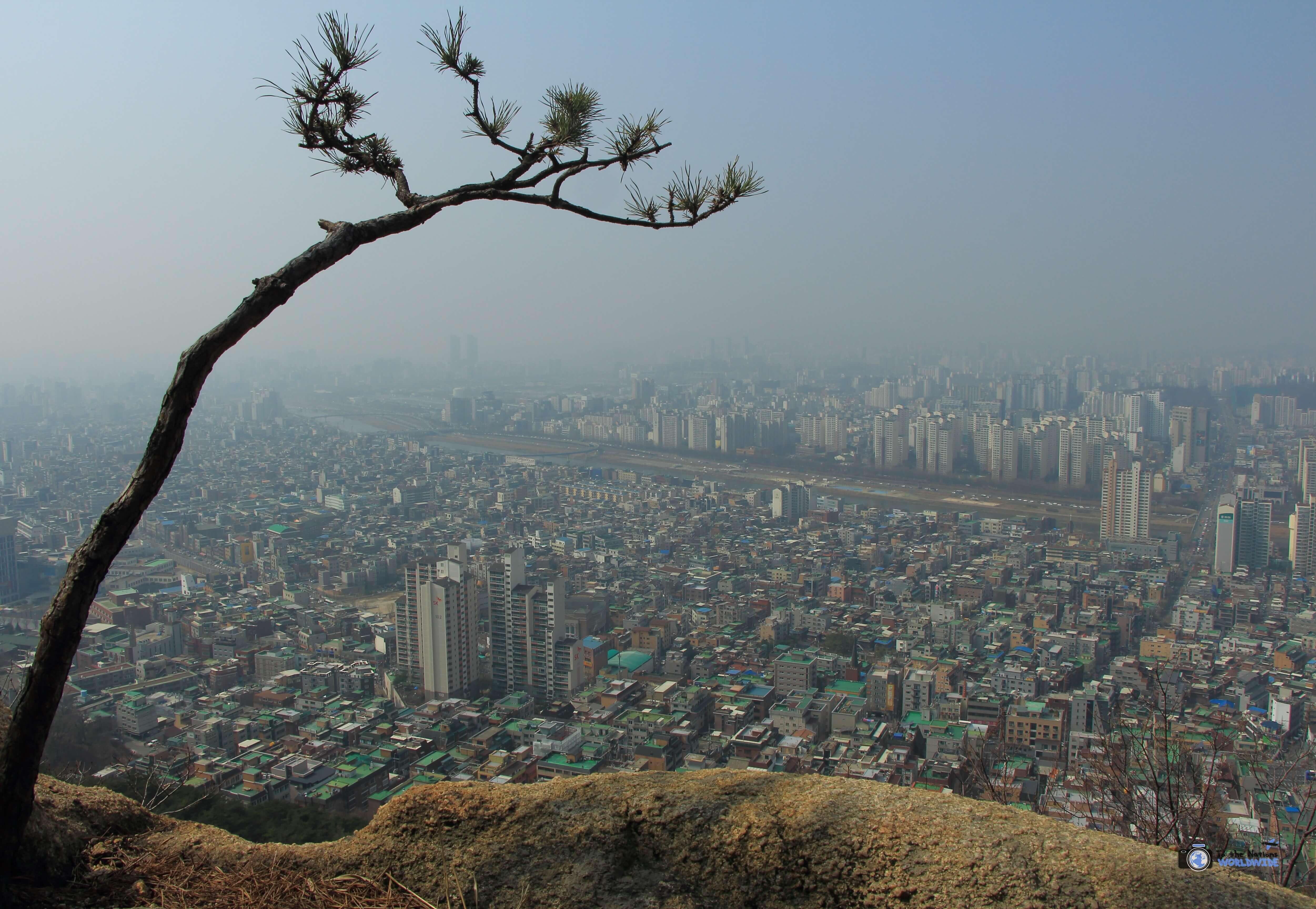 Using this list, we were able to find some pretty amazing things to fill our time when we were living in Seoul. It is such an amazing city and one that we were happy to live in for some time together. It definitely kept us entertained while we were living there.

There are always things you can do while traveling that are free, or close to it. With a little bit of research and planning ahead of time to include these things into your Seoul, South Korea budget travel itinerary. Your wallet will thank you, and it will allow you to spend your saved money elsewhere.

We would love to hear about your experience while in Seoul, South Korea or to answer any questions you may have about your future trip. Leave a comment below!

In the late 19th century, Seoul, South Korea found itself rapidly advancing towards the modern country that it is today. Buildings, railways, subway systems, everything was being constructed at a fast pace, and little was being done to preserve the green spaces within the city. Though Seoul became a modernized country fast, the city lost a lot of parks for apartment buildings. Fortunately, in recent years these spaces have come to the forefront of issues within the city. Several parks and green spaces are attractions throughout the city and offer an escape from the mind-numbing face-paced city for it’s residents and tourists alike. Among these green spaces is Seongjeongneung, a place where Korean royalty is buried. 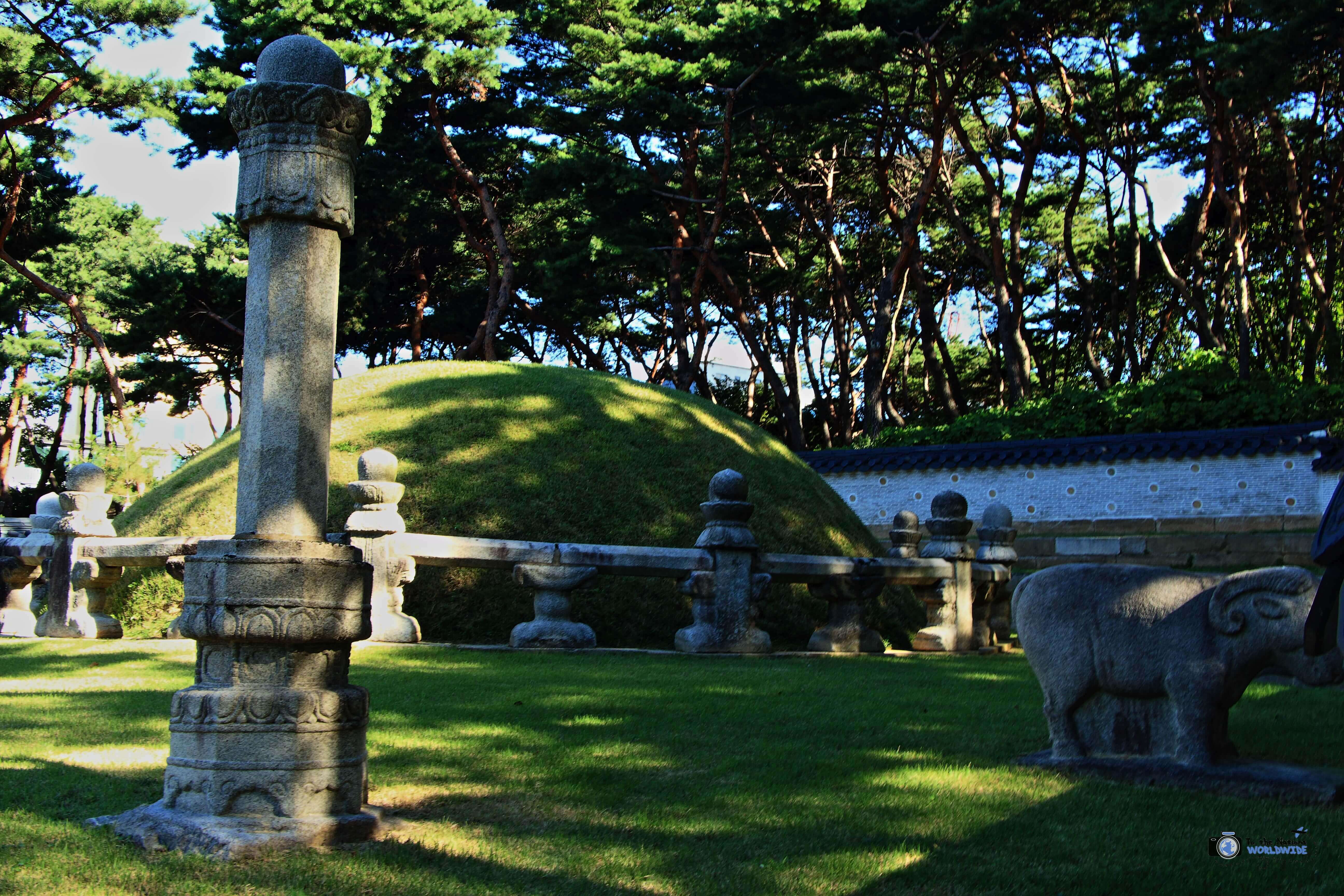 Seongjeongneung is the burial grounds of Korean royalty, including the 9th ruler King Seongjong (1457-1494) and his third consort Queen Jeonghyeon (1462-1530), together titled Seolleung, and King Jungjong (1488-1544), titled Jeongneung, all from the Joseon Dynasty. Surrounding the tombs are stone objects of military and civil officials, and symbols of power.

Seongjeongneung is an inexpensive look into the past and a beautiful area that will make you feel as though you were no longer in Seoul. Walk around the area and see the burial mounds of King Seongjong, Queen Jeonghyeon, and King Jungjong. View the contrast between the traditional Korean architecture and the modern architecture of the buildings that surround it. Get a great view of the shrine and buildings surrounding Seongjeongneung below from the royal tomb of King Seongjong (1457-1494) that rests on a small hill.

Walk further into the area to find the tomb of Queen Jeonghyeon (1462-1530), King Seongjong’s third consort. These two tombs are called Seolleung. On the other side of Seongjeongneung rests King Jungjong (1488-1544) in the single tomb called Jeongneung. Also resting on top of a small hill, it is not as accessible to the public. At the foot of the hill is another shrine. Surrounding each of the burial mounds are stone sculptures. Grab a pamphlet when you enter to see a map of the area and to get more information.

To get to the park, take the subway to Seolleung Station on line #2. Coming out of exit 8, walk straight for 5 minutes until you reach Seongjeongneung with the entrance on your right. Exploring Seongjeongneung will last one or two hours depending on how much you look around and take photographs. The location is convenient, it does not take long to find, and for just 1,000 KRW (less than $1 USD), it is well worth exploring.

Seongjeongneung has so much to offer it’s visitors. It is an escape from the city outside it’s walls. It is a glance back at Korean history and Korean royalty. It is a contrast between the traditional Korea and the modern. It is worth it to add this lesser known attraction in Seoul to your itinerary when you visit.