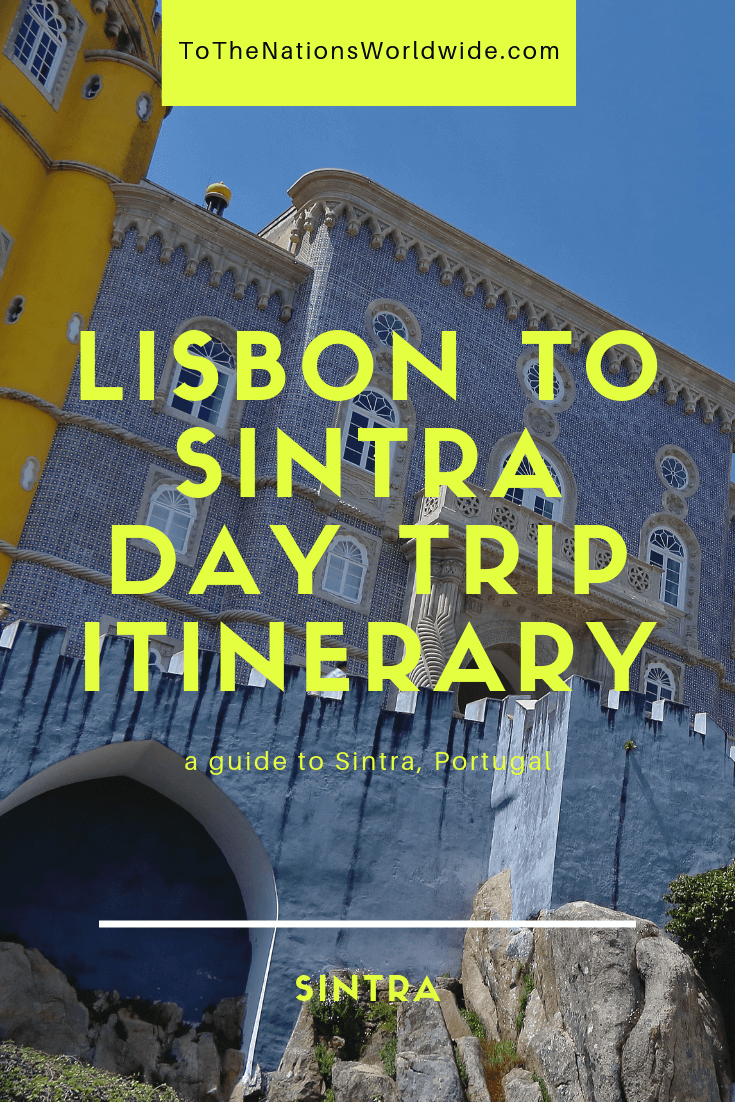 Sintra is situated to the northwest of Lisbon and less than an hour by train. It extends to the coast and is dominated by a national park. There are many different beaches and natural attractions along the cost and within the city.

The city is famous for the National Palace of Pena, the first thing that we accomplished when we arrived in the city, and the attraction we would recommend to anyone visiting the city to do first. After that we had time for just one more thing in our itinerary before we left for Lisbon for the evening and that ended up being the Castle of the Moors which was an interesting step back into history to experience.

Our time in Sintra included a lot of walking and nothing but wonderful views and exquisite sites. There is no doubt in our mind that you need to make the day trip to Sintra when you are staying in Lisbon.

One Day in Sintra, Portugal

What to See in Sintra in One Day

This is our number one recommendation when you visit Sintra. It is a colorful palace that was constructed in the nineteenth century. Like most of the popular attractions that Sintra has to offer, Pena Palace is situated in the hills that overlook the city. It is a short taxi ride to the palace itself from the train station.

A UNESCO World Heritage Site, the Romanticist palace was built from the ruins of an old monastery. It is a colorful palace on the exterior and it is elaborately decorated inside as for much of its years it was the home to Portuguese royalty. 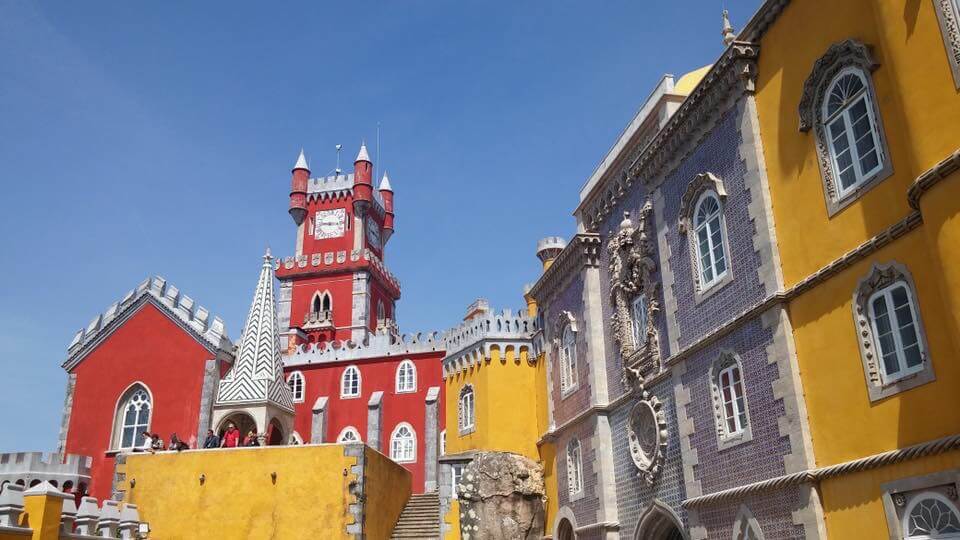 After paying your admission fee into the park, there is a small bus that can take you to the palace that we decided to take advantage of due to our lack of time and the amount we would already be walking on this day.

From wandering around the exterior getting vantage shots of the surrounding territory and outdoor shots of the palace to taking a self-guided tour of the interior, Pena Palace will surely amaze and inspire you. Though we arrived midday, the pathways of the exterior were not too busy, but once we entered the palace there was evidently more people lined up and it was congested at times.

We did take a small break and grabbed some sweets to fuel ourselves up while in Pena Palace as they do have a small area that serves a meal and desserts. 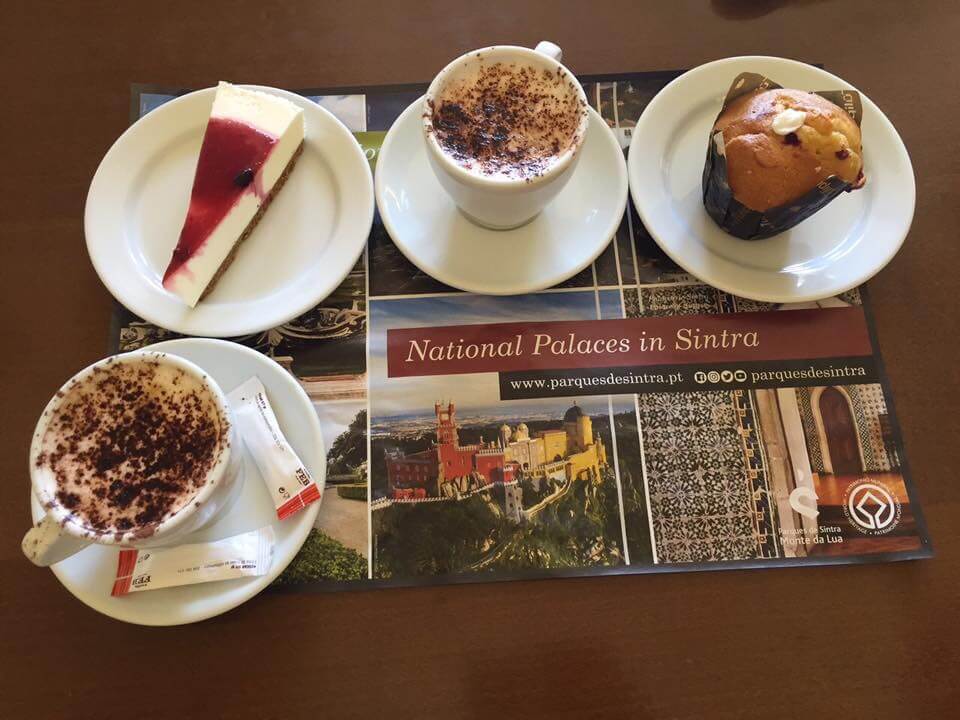 Tickets cost 14 euros per person. We recommend that you get there early when it opens at 9:30 a.m. to avoid the crowds and to get the shots in that you want. It will easily consume a couple of hours of your time here, much more if you are excited about taking photographs here as we were.

Created to defend the city of Sintra by the North African Moors in the ninth century, the Castle of the Moors never recovered from the Christian conquest. King Ferdinand II restored the castle making it a ruin overrun by vegetation and a garden feature of the Pena Palace.

From the entrance gate at the roadside it is about a fifteen minute walk through the forest to get to the actual castle. From here you can wander around the grounds freely, seeing where the water source came from below the castle to the highest points of the towers to view the surrounding landscapes. Though we did get to see some magnificent views while at Pena Palace, these views that the castle offers are still very much worthwhile for a different vantage point and subjects that are included in the views.

It is slightly cheaper than Pena Palace to enter at 8 euros per person and has the same operating hours opening at 9:30 a.m. We chose to do this later in the day and there was barely anybody walking around the grounds which was perfect. We spent about two hours here from entering the roadside gate taking our time walking through the castle.

A post shared by To the Nations Worldwide (@tothenationsworldwide) on Apr 2, 2018 at 9:21am PDT

Would we have had enough time, this would have been our next attraction due to its proximity to Pena Palace and Castle of the Moors. It is a palace that was constructed in the early twentieth century. It is a large estate that holds a chapel, palace, and gardens that you can tour. With similar hours of operation as Pena Palace and the Castle of the Moors, it would be our third choice to add to a day trip.

This palace is a medieval Moorish royal residence from the eleventh century that has existed and housed royalty since the fifteenth century. Today it is a historic house museum. It has the same hours of operation of the other attractions we have previously stated and is in close proximity to them, so likely this palace should be reserved for another trip to Sintra or if you are staying more than just one day in the city.

This is located further through the hills and a bit further away from the other attractions. It is a nineteenth century palace that was built from the ruins of another residence. Another wonderful palace to add to your list to tour the grounds of while in Sintra if time allows in your schedule.

Where to Eat in Sintra

As we mentioned earlier, Pena Palace does have a restaurant that serves meals and another area that serves desserts. We did take them up on the desserts that they had to offer close to the end of our visit there.

To go along with our time in Sintra and visiting a palace and a castle in one day, we decided to find a place with a nice environment to enjoy a meal together before boarding our train to go back to Lisbon. Metamorphosis was that restaurant.

It is located right by the train on a side street and had walls painted similar to those of Pena Palace. We enjoyed a nice meal here before catching our train back to Lisbon.

Where to Shop in Sintra

Both Pena Palace and Castle of the Moors had souvenir shops. If this is what you are looking for when it comes to shopping, then you will not be disappointed.

However, during our short tour of the actual city of Sintra we did not find any many shops or a bustling city for that matter. If shopping besides souvenirs is what you are looking for, perhaps it would be better to get that done while in Lisbon.

How to Get Around Sintra

We did a significant amount of walking when in Sintra, but most of that came from touring Pena Palace and Castle of the Moors. When we arrived in Sintra from the train, we grabbed the 434 bus that connects the Sintra train station to the surrounding attractions. This costs 3.90 euros and is essential to get up the steep and winding hillside to Pena Palace. Alternatively you could grab a taxi, but driving yourself would not be advised as there is very limited parking.

After our time in Pena Palace was up and we walked to the Castle of the Moors. From the castle to the train station we tried to grab an Uber, but when he arrived he said he could not take us and that the trip should be cancelled. After it was cancelled he then said that he could take us for double what the fare had originally said in cash. Obviously we did not go for this and we found a vintage convertible that was willing to take us down for a similar rate to what the Uber had originally displayed.

The kicker to all of this was that we must have received a poor rating from the Uber driver that cancelled on us because the next time we tried to grab an Uber, it would not connect us with a driver. Since we were new to Uber at the time, our rating must have been really low because of this incident and when we finally did get a driver he mentioned that to us.

Never fall for those tricks of paying more than what is displayed. He tried to take advantage of us and still hurt us through the app somehow.

How to Get to Sintra from Lisbon

The best way to get to Sintra from Lisbon is by train. It is inexpensive costing less than $5 USD and taking less than an hour to get from Rossio Station in Lisbon to Portela de Sintra in Sintra. It also drops you off right near the major attractions with a short taxi ride to Pena Palace, Castle of the Moors, and Quinta da Regaleira.

We love to use Rome2Rio to find out the best way to get from one destination to another.

Where to Stay in Sintra

There is a lot to see in Sintra and you may be interested in staying just a full day and making the trip from Lisbon like we did. We did miss out on a couple of attractions and would have liked more time as we did feel a little bit rushed, but we did not consider taking another day from Lisbon to come back.

That being said, if you are interested in staying longer than just a day in Sintra, we would recommend that you stay in the area near Pena Palace, Castle of the Moors, and Quinta da Regaleira. Booking has some incredible places that fit a range of budgets in this area.

We visited Sintra in late April. This seemed like the perfect time to go as the weather was becoming increasingly warmer, even reaching to the point where we could relax on the beach if we wanted to. It was also not yet a high season for tourists to visit Portugal so we were not overrun at Pena Palace or Castle of the Moors.

We would definitely recommend visiting Portugal around this time or shortly after the high season in September to October.

If you are planning to stay in Lisbon then you need to add Sintra to your itinerary. This is an absolute must. You will miss so much if you skip this little city.

Bring your walking shoes, lots of water, and be prepared to take in so much of the history, architecture, and wonder that this city has to offer every one of its visitors.

If we could go back in time, wake up a little earlier, skip breakfast in Lisbon, and head straight to Sintra, we would add Quinta da Regaleira to what we did in Sintra. Due to its proximity to Pena Palace and Castle of the Moors, it would have fit in nicely to our day trip from Lisbon.

However, we had already walked a significant amount after visiting these two attractions, so take that into consideration as well. By the time we arrived back in Lisbon we were exhausted. Adding one more attraction to the list could have been the straw that broke the camels back so to speak. It may be worth while to spend one night in Sintra in this case.

Plan accordingly and enjoy your time in this wonderful city.

We would love to hear about your experience while in Sintra or to answer any questions you may have about your future trip. Leave a comment below!

Check out more from our experiences in Portugal here.