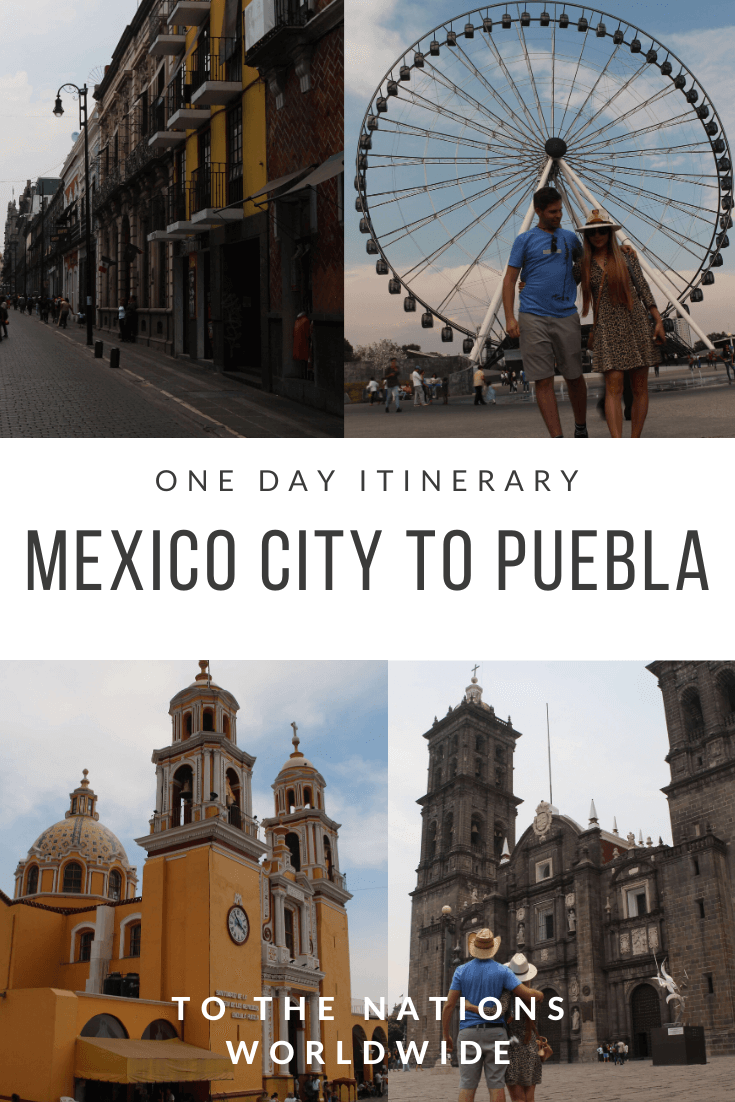 It turns out Puebla is the only city in Mexico City that celebrates Cinco de Mayo. Did you know that??

I definitely did not until researching about when we should visit Puebla and stumbling onto it and promptly scheduling it for our May 5th day trip from Mexico City. The reason why it is celebrated in Puebla is because that is the stage where the battle was fought and won by the Mexican Army over the French Empire on the same date of 1862.

The thing about scheduling something in your itinerary for a specific date is that you need to keep track of what day it is. And when you are traveling, keeping track of what day it is can become difficult quickly. So, on the morning of May 5th in our AirBnB, this is what the conversation between myself and Natalie sounded like.

Natalie: “What are we doing today?”
Mike: “We are going to Xochimilco to do a boat ride and then maybe walking around the area and coming back to walk around Chapultepec.”
Natalie: “Sounds great, where do you want to grab breakfast?”
Mike: *Stunned expression* “Wait, what day is it?”
Natalie: “The fifth.”
Mike: “Never mind, we are going to Puebla today to celebrate Cinco de Mayo, let’s go!”

And thus began our day trip to Puebla to celebrate Cinco de Mayo.

Puebla is at the top of our recommendations for day trips from Mexico City. The city is filled with history. Almost like an extension of Mexico City, but with more color.

In order to accomplish everything on this list you will need to make the most of your day trip. Make sure that you get to the bus station before 7 a.m. to get to Puebla shortly after 9 a.m. to get the most done in the day. This is where we messed up as we did not get into Puebla until after 11 a.m.

Things to Do in Puebla 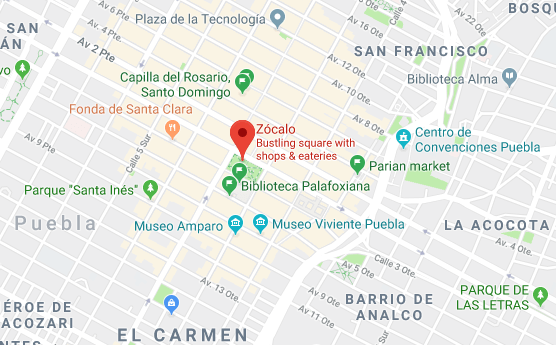 Zocalo is the city center of Puebla and the perfect starting point in the city to see the historic buildings. From the bus stop we took an Uber to as close as we could get to here before our driver had to let us out to walk a few minutes because of the Cinco de Mayo festivities. This Uber cost us a little over 100 pesos. From this point you can enjoy the main square of the city and relax or use it as a starting point of your walking tour to the next few places on our list. 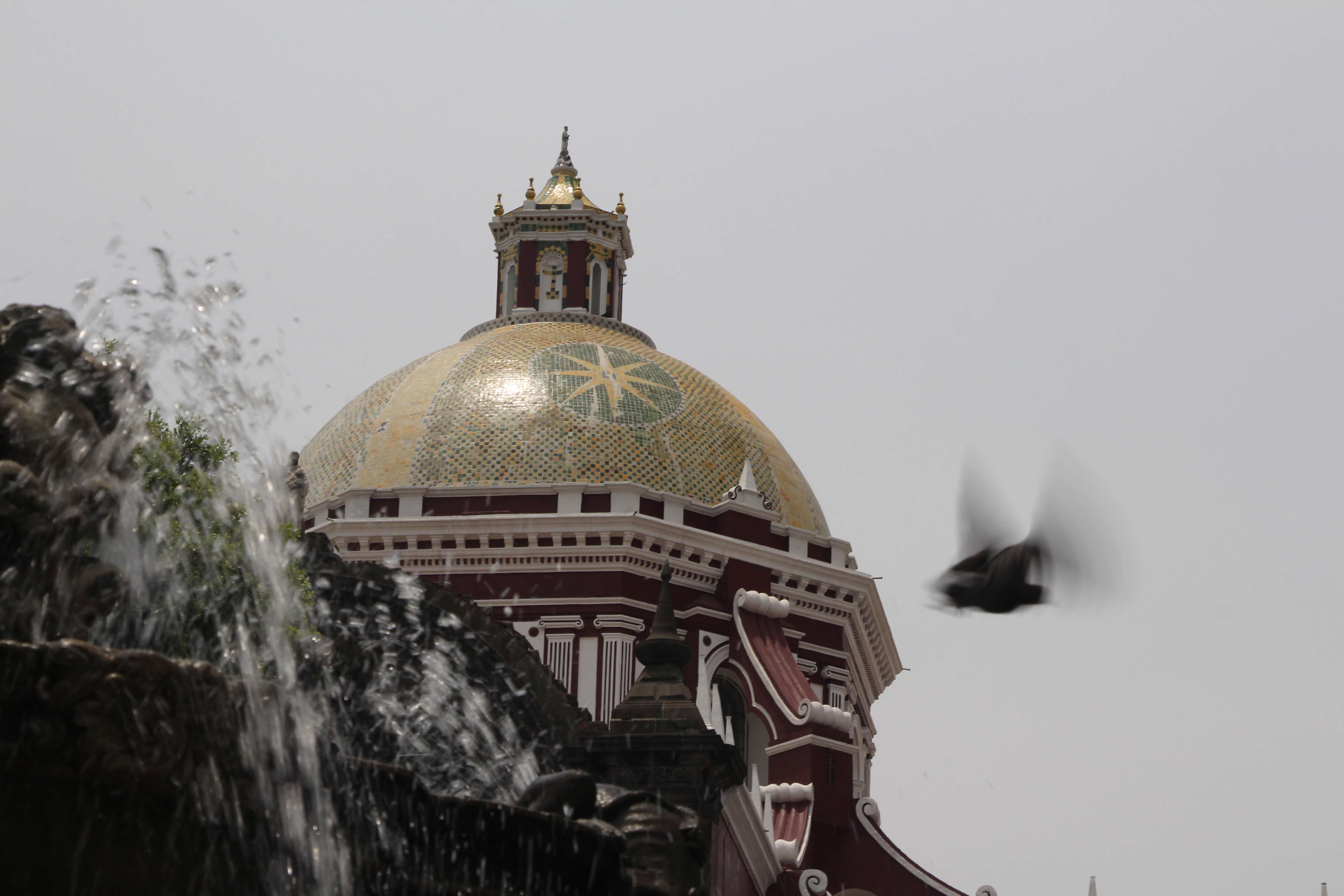 With Catholicism being so prevalent in Mexico, there are several important structures in each city you visit. Puebla is no different with these three within a short walk from Zocalo. They are definitely worth checking out and have free admission if open to the public. 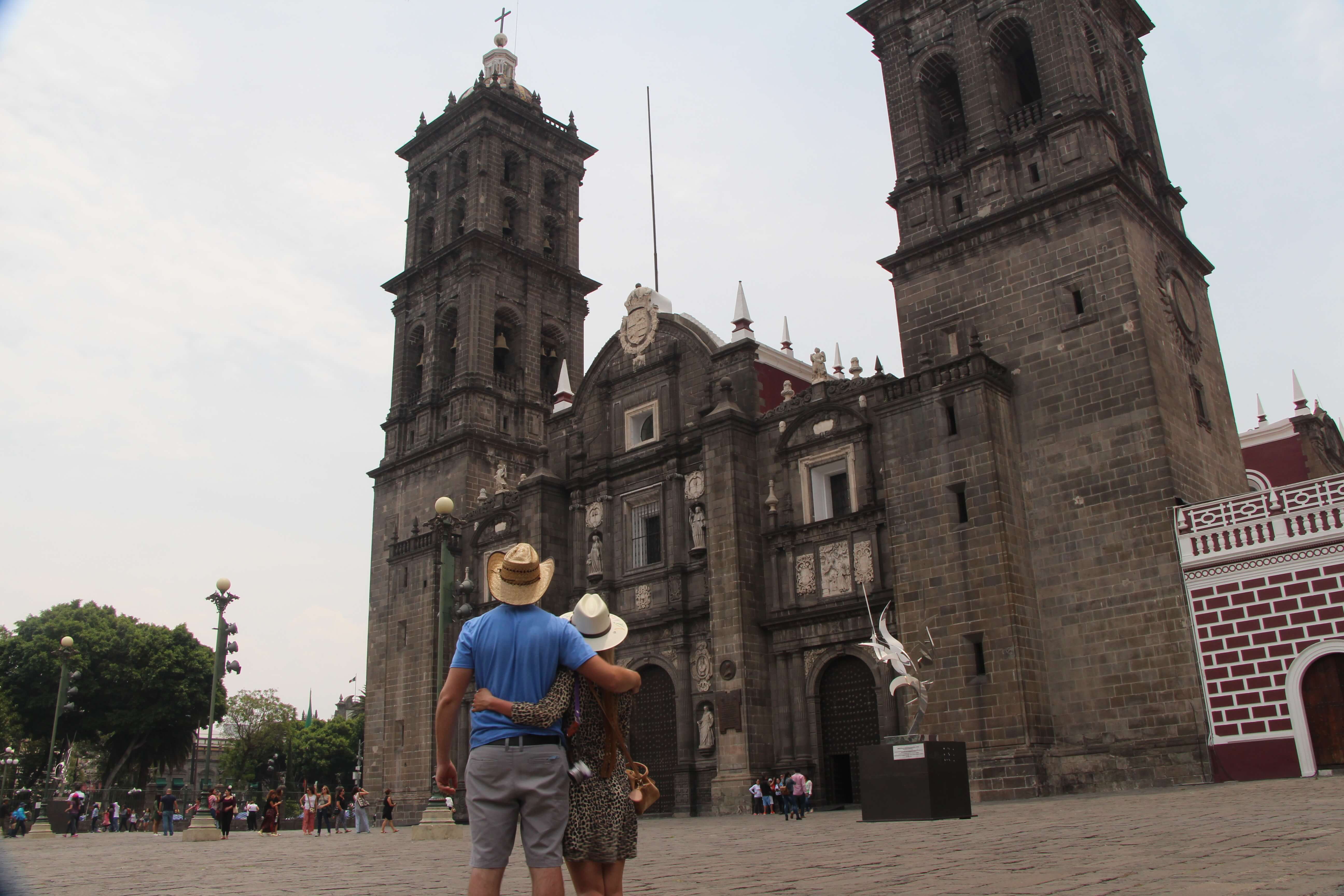 Founded in the mid 1600s, this library was the first in Mexico and considered one of the first in North America. It holds many texts from the fifteenth century until now and is a beautiful architectural piece. There is a tour and a cost of admission that goes along with entering of approximately 35 pesos.

This is a market where you can purchase all of the souvenirs, street food, or shop the local craftsmen shops. We walked in to a cigar shop where they were rolling the tobacco right in front of us. There were also numerous food stalls and souvenir shops. This is really a great place to go for a stroll and to see what the city has to offer you when it comes to shopping and eating.

An iconic observation wheel that allows you to get a beautiful view of the city and its surroundings. It is a little bit out of the way so it is best to take an Uber from Zocalo to it before going to Cholula or on your way back from Cholula to get to the bus station. From Cholula to here, it cost us around 100 pesos. Either way, it is always nice to get a wonderful view of the city from way up. The cost is approximately 40 pesos. 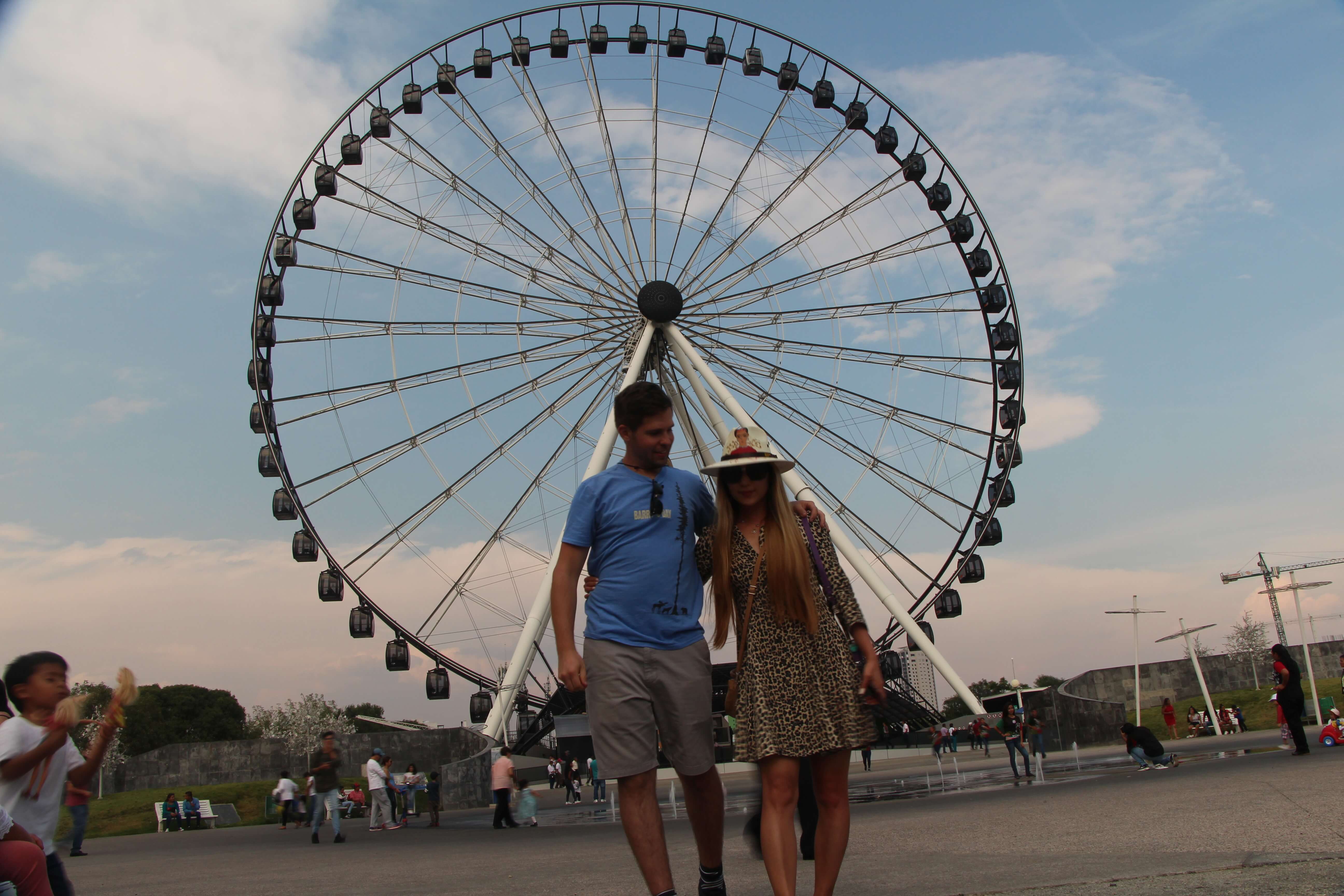 Next to Puebla city is Cholula, another city that you need to visit should you be in the area to see the next two places on our list. Despite Puebla providing us with gorgeous flashbacks to Cuba and its beautiful historic architecture, Cholula’s two attractions really made the trip from Mexico City worth it. Do not miss out on these two. If you only have one day to do both, you will definitely have to use Uber to get her to make the most of your limited time. We took an Uber from Zocalo to Cholula and it cost about 150 pesos.

Built atop a pyramid, this shrine was constructed in the late 1500s. The hike up from street level is steep and lasts only about 10 to 15 minutes. The view of the city is wonderful. On clear days you can even see the volcano in the background, but these days there is a lot of dust and smog covering it up so we did miss this view. There are small food stalls and souvenir shops at the top. You can only peer into the altar and no photos are allowed, but you are free to walk around the structure and grab as many photos as you want. It is really a gorgeous place to see for yourself. 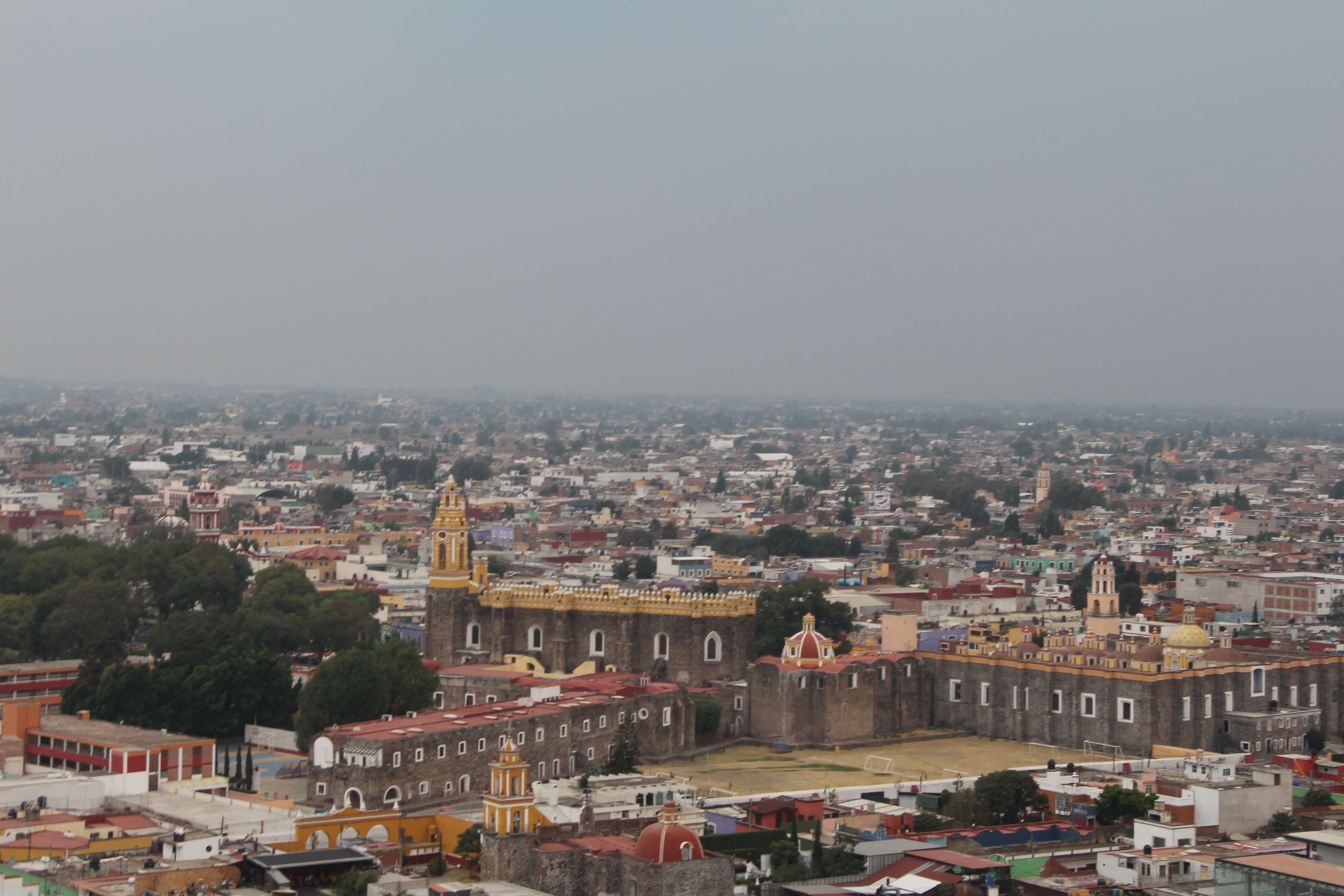 Located at the foot of the hill to the top of the Shrine, this site is home to the Great Pyramid of Cholula or Tlachihualtepetl. It is said to be the largest architectural site of a pyramid in the New World and the largest pyramid in the world, though from a distance it just looks like a big hill that the shrine sits atop of. However, it is still being excavated and is known to be the site of a temple. We did miss out on entering this incredible place as we ran out of time, but definitely would recommend it based on what we hear from other travelers here. Cost of admission is approximately 70 pesos per adult.

Best Places to Eat in Puebla

With not every place being open during the Cinco de Mayo celebrations, we were not able to pick and choose the restaurants and cafes that we had on our list. Still there were a lot of places open and we have some recommendations below.

This was our first stop when we got to Zocalo. It was our second choice as we walked east from the square towards a cafe that was on our list. Unfortunately, that one was closed. Fortunately, Catalina Cafe is a lovely little two story cafe with good coffee, cakes, and pastries for you to choose from. 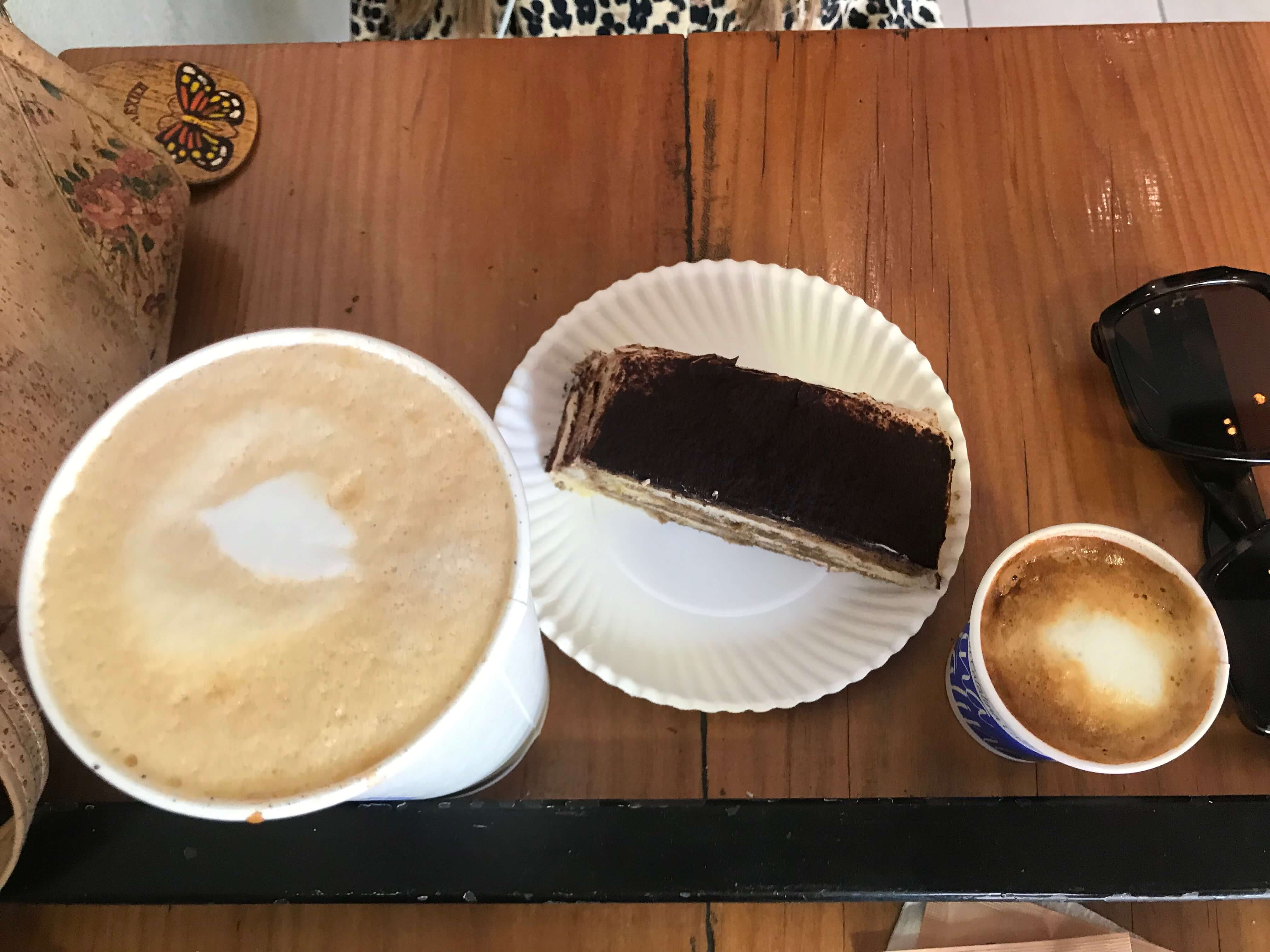 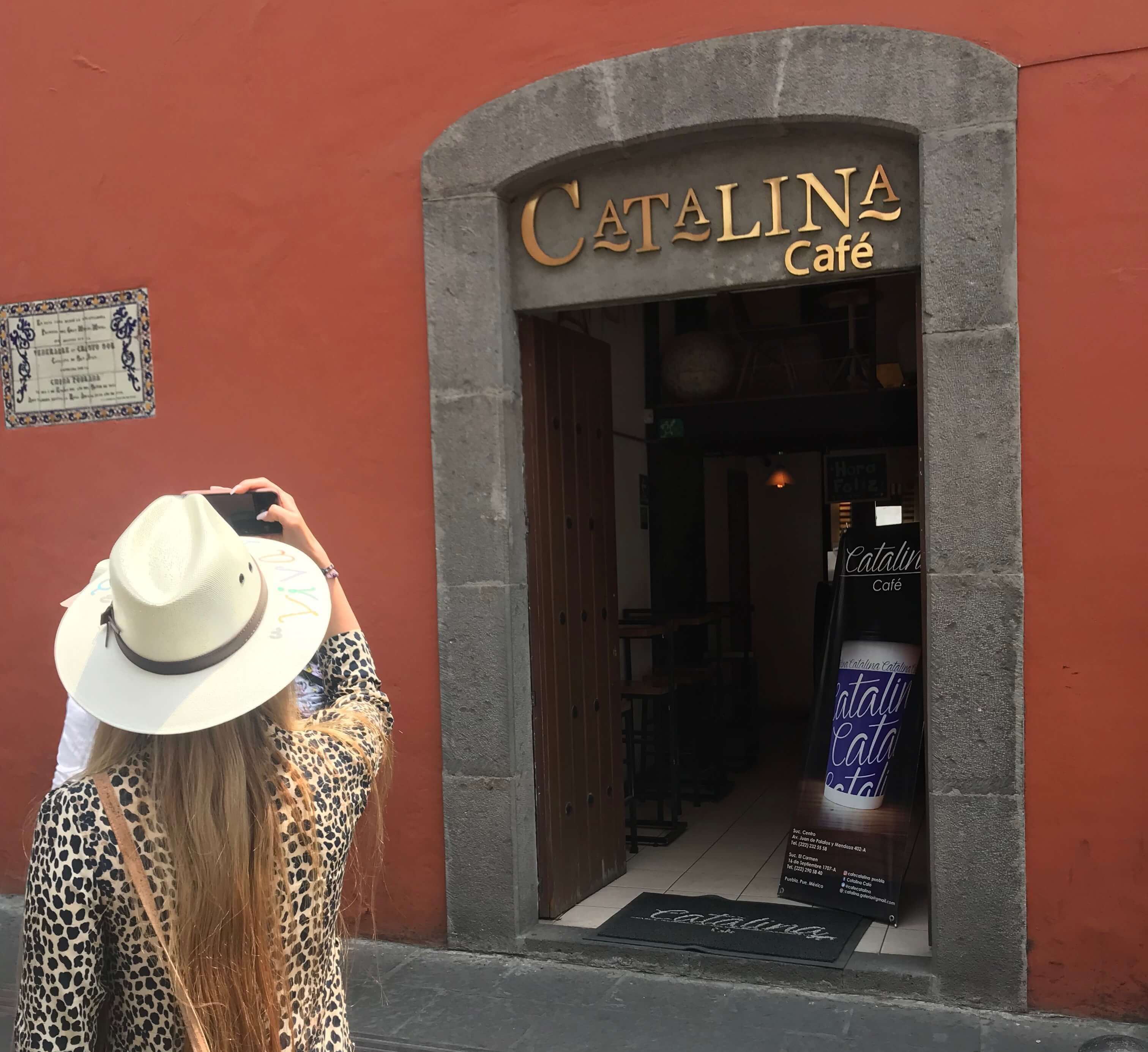 If you have a sweet tooth, then La Gran Fama is the number one choice for hand made candies and sweets. Founded in the 19th century, you can find a wide variety of snacks to satisfy any craving for sweets. 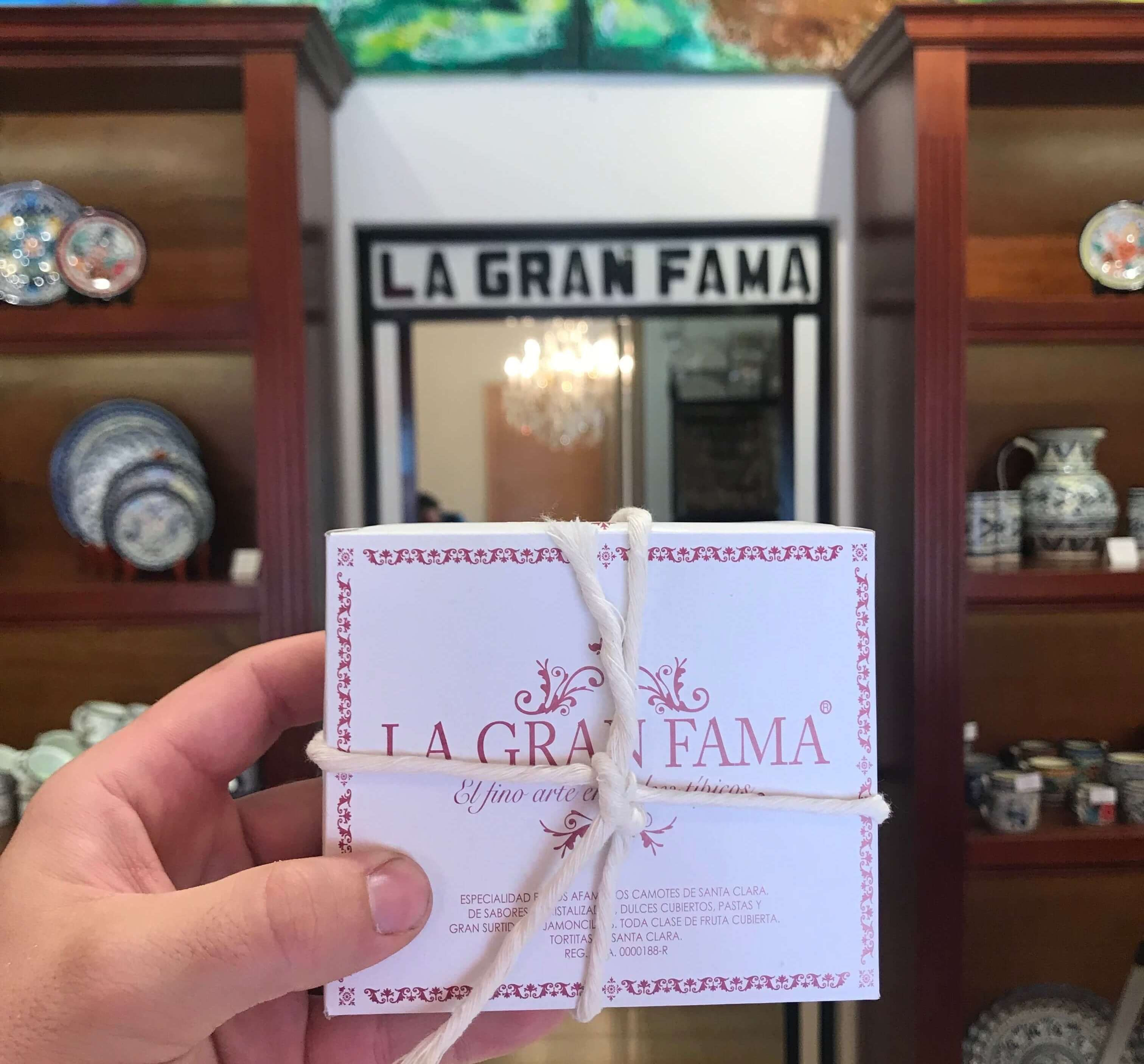 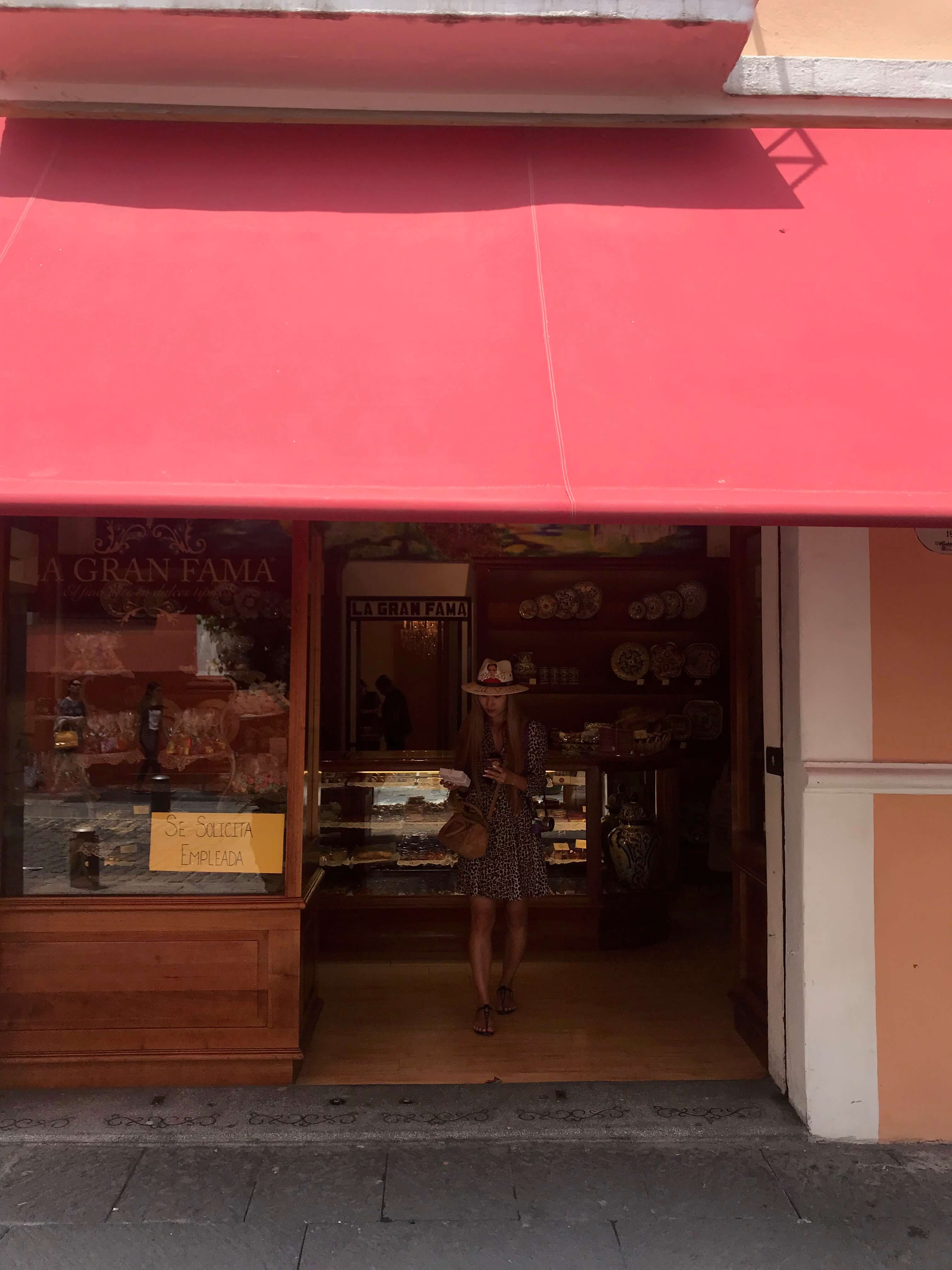 A more commercialized Mexican style restaurant available in Puebla around Estrella de Puebla that you can visit. They served some delicious bread with a wide range of salsa dips that we were excited to try. The tacos were amazing, from crab to shrimp. 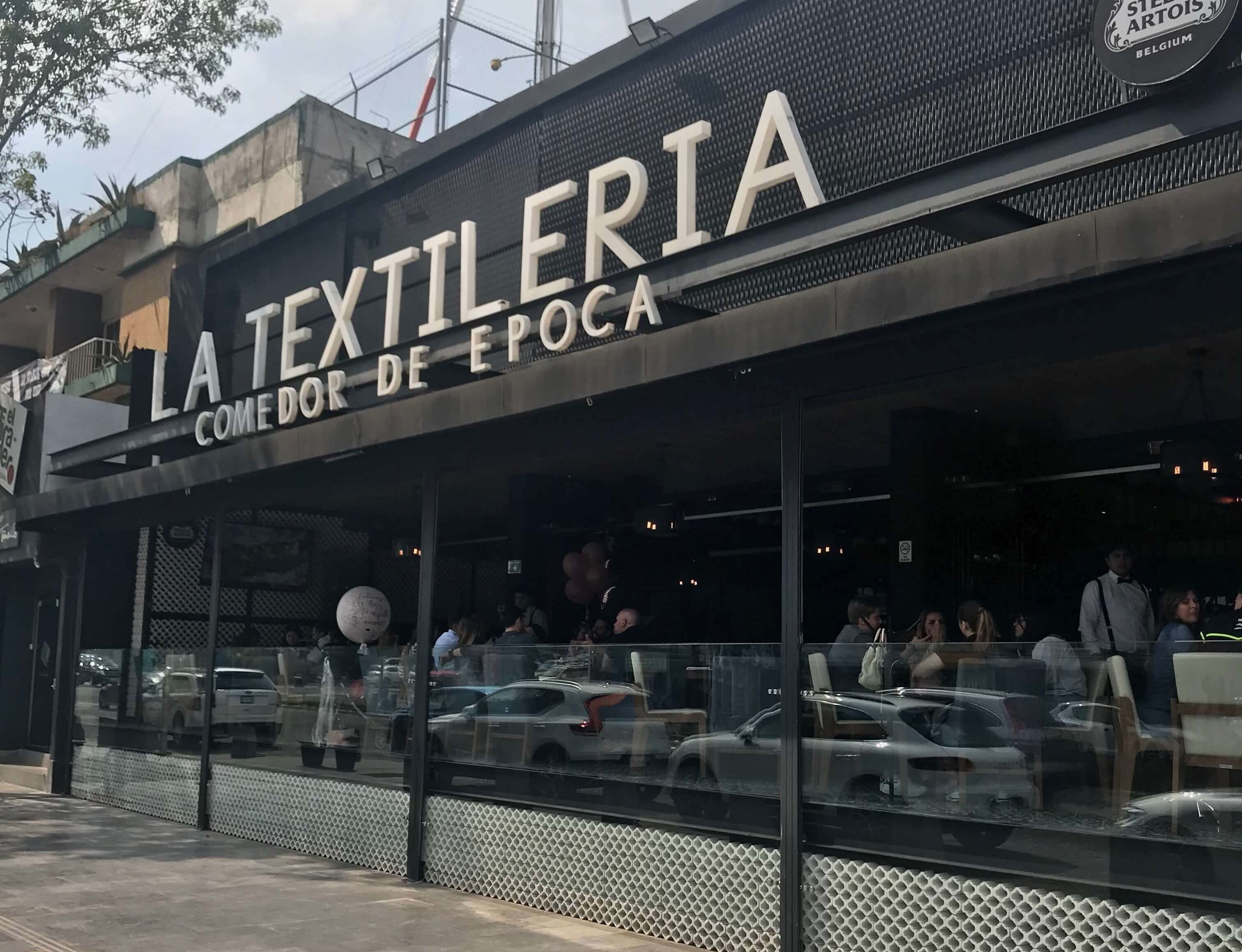 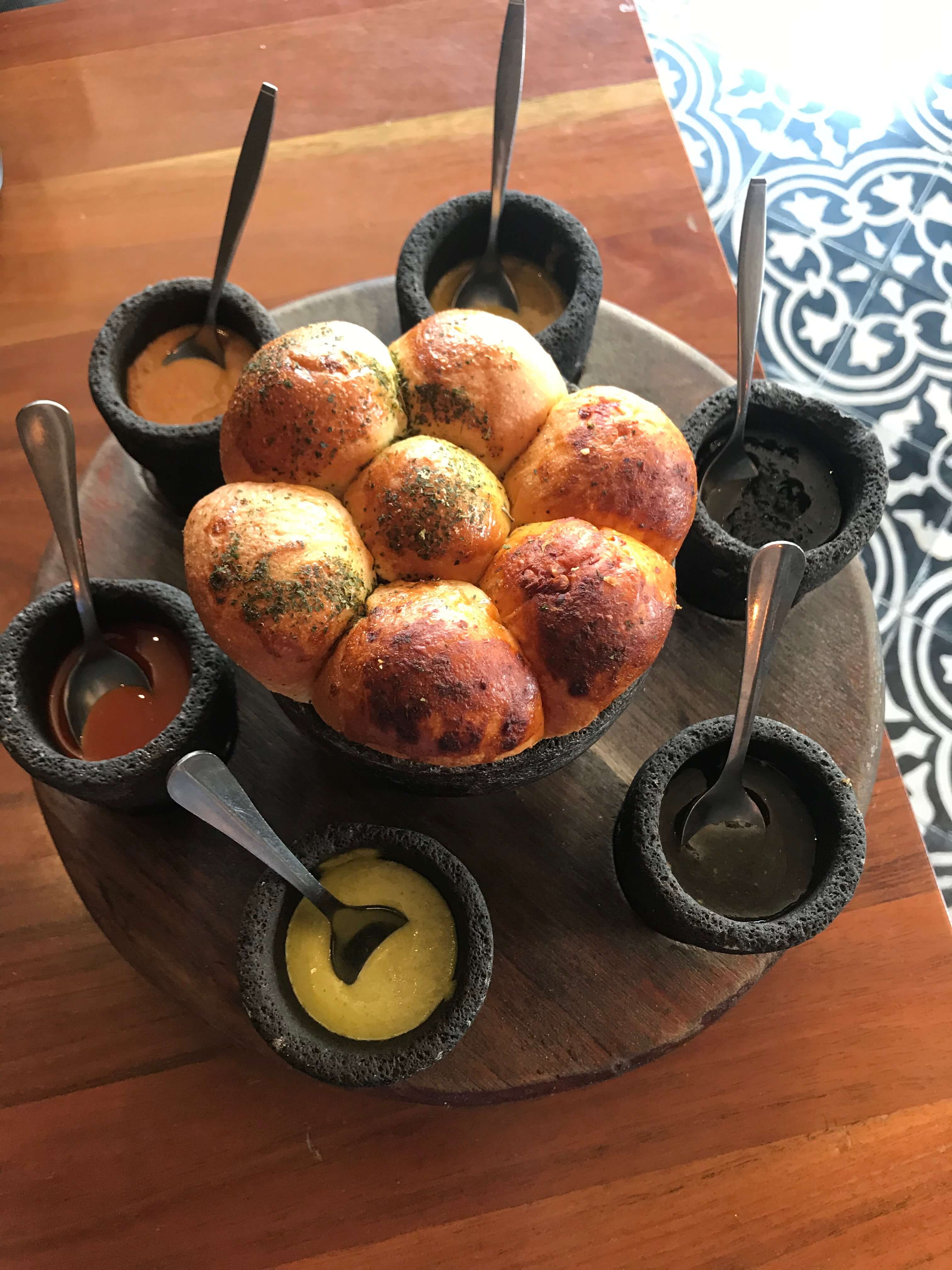 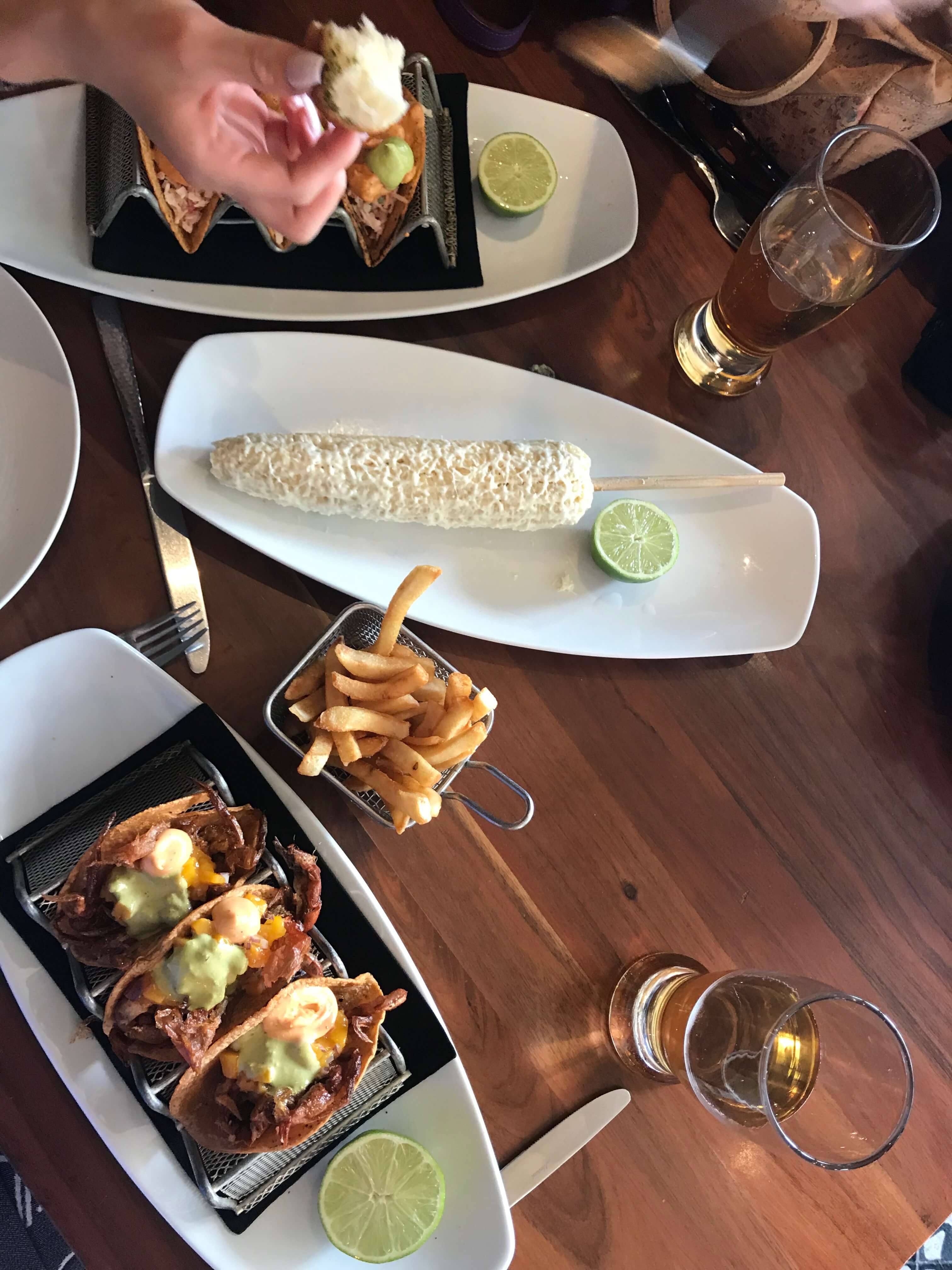 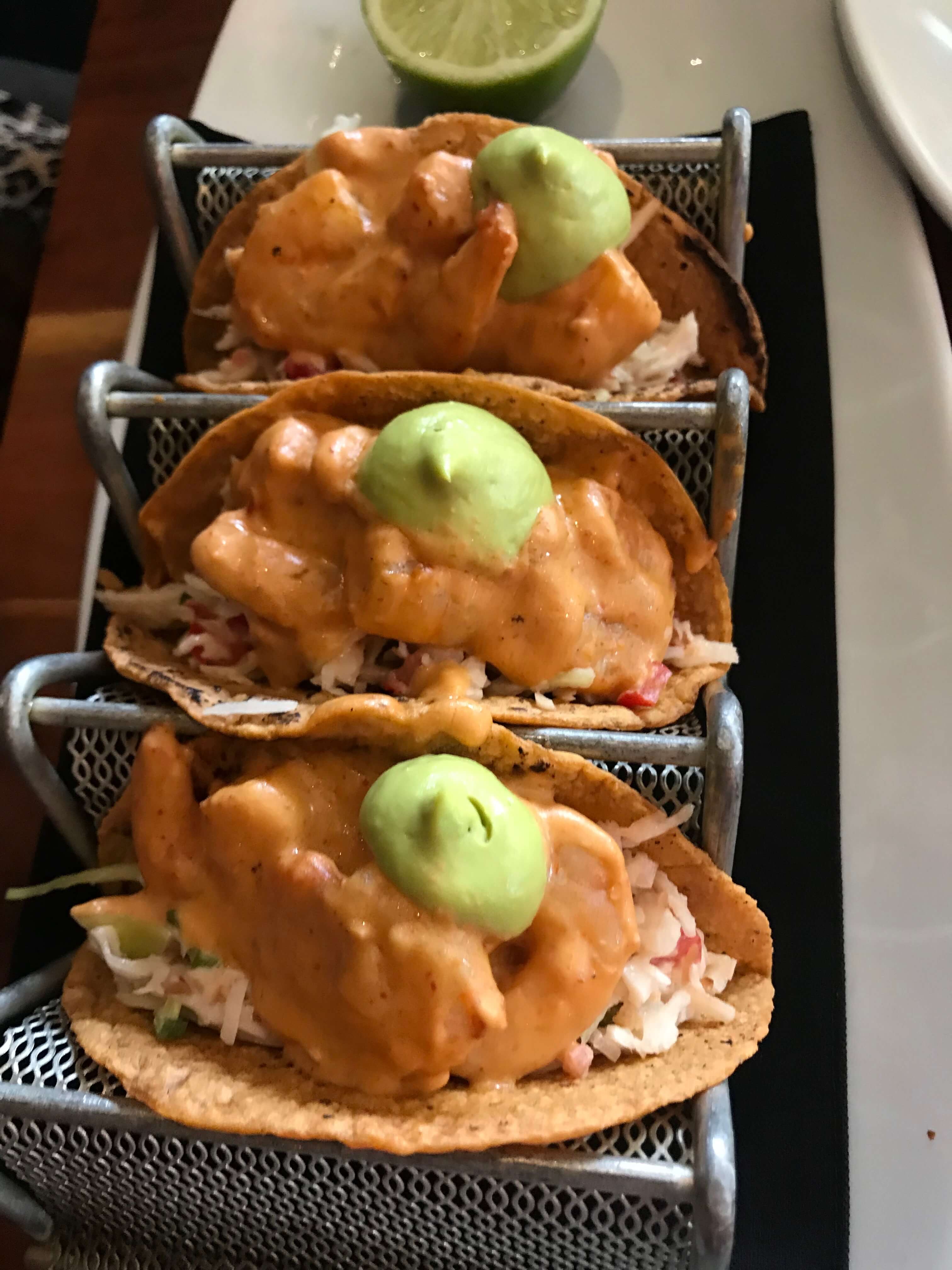 Bus From Mexico City to Puebla

Puebla is an easy 2 hour to 2.5 hour bus trip from Mexico City. We took an Uber from our AirBnB in La Condesa to the Mexico TAPO bus station which cost $70 pesos.

Like with any transport throughout Mexico City, we always recommend taking an Uber. It is reliable, safe, and cost effective. The metro system would be cheaper, but it will take up more of your time. We were also warned by our host of pick-pocketing incidents being frequent. Taxis in Mexico City do not look reliable, so we steered clear of using them.

Once you arrive in Mexico TAPO, you have a wide selection of busing companies to take you to Puebla Terminal CAPU. You will enter the station and be presented with a circular forum with ticket sales along the borders. We went with OCC without wasting any time checking other vendors. A round trip per person cost us $192 pesos. 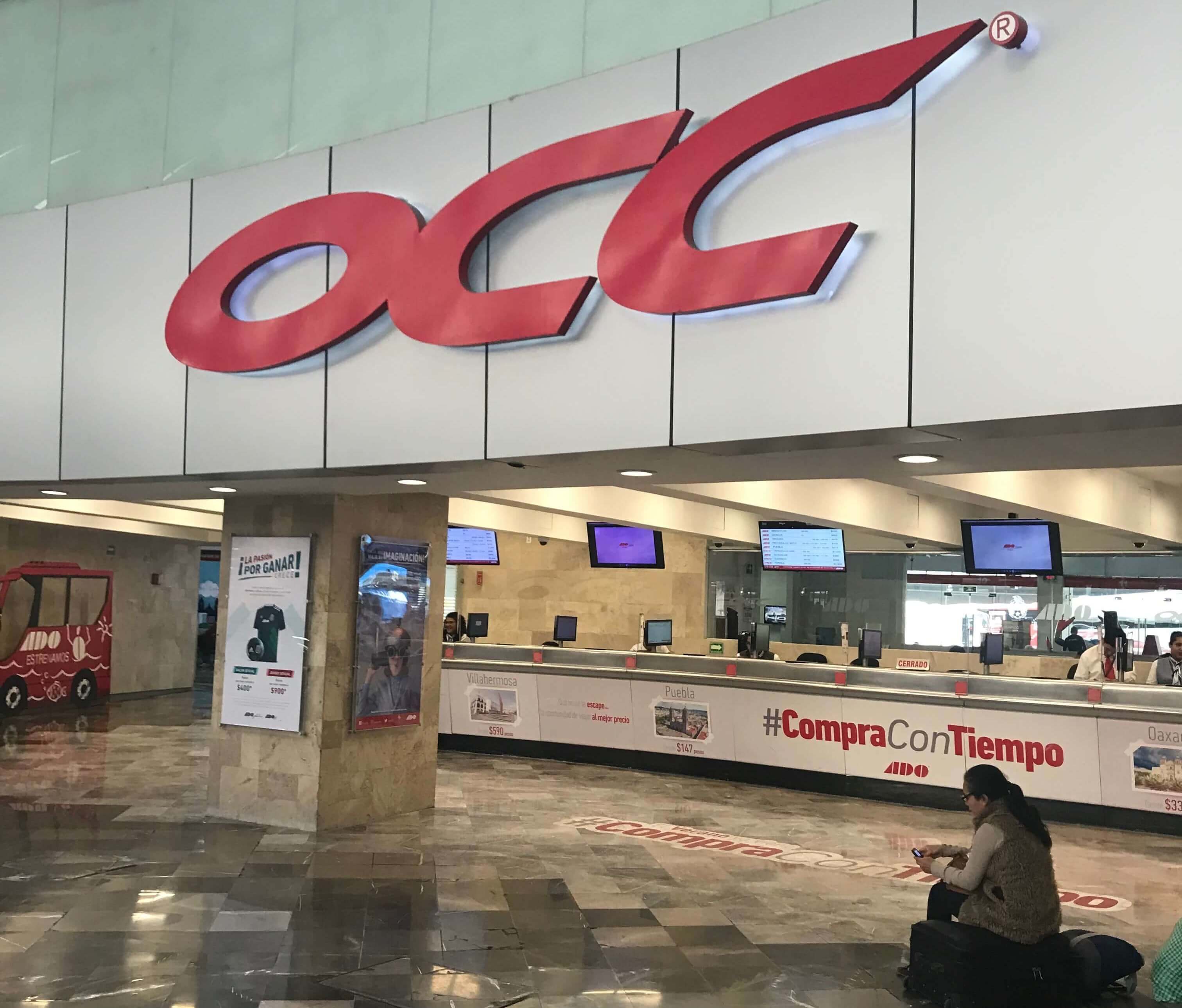 You do have to specify your departure time in both Mexico City and from Puebla, so make sure you give yourself enough time for what you want to do in Puebla. We gave ourselves an extra hour leaving at 6:30 p.m. from Puebla and it was a little bit of a rush to get done what we wanted to do. Leaving at this time brought us back to Mexico City before 9 p.m. and then getting an Uber back to our AirBnB took us past 9 p.m.

You will be provided with a gate number where the bus will be departing from and you will just be looking for when your bus is departing. On our way back from Puebla it was a little bit more confusing as we had to ask one of the representatives where our gate was. It is easy to ask by showing the ticket even if they do not speak English.

While in the city, we walked a lot. We did take an Uber from the bus station to Zocalo and walked around every place that we could as most of them are within walking distance. When we could not walk and had to get somewhere fast, Uber was the best option.

Unfortunately we just missed out on the Cinco de Mayo parade in Puebla. However, there were so many things going on within the city from markets and small shows if we followed the Cinco de Mayo event plan. With a list in hand of things we already wanted to do in Puebla, we did not bother trying to visit these small shows, but were excited to see the markets, street food vendors, and stalls throughout the city.

There were a lot of people on the streets celebrating, and especially when the parade cleared that passed by close to the Zocalo area, people flooded into the main area of the city to take part in the markets and to eat.

Is Puebla worth visiting on Cinco de Mayo? If you want a lot of people around and enjoying the festivities of open markets and artists in the park areas, then absolutely. Definitely get up early to get to the parade if this is what you are interested. We really enjoyed the atmosphere of the city on this day, but it definitely would not be for everyone. It was very busy, and we did not get to enjoy some of the performances that we could have seen because it did not fit into the things we wanted to see in Puebla which we thought were more important at the time.

We enjoyed our time wandering around the city of Puebla. The architecture is worth the trip alone. Let alone the great street vendors, history, and attractions to visit. It is second on our list of day trips from Mexico City, with Teotihuacan being the best day trip that you can do from Mexico City.

Unless you want to see the parade and enjoy the crowds of locals in the city, then I would plan your Puebla day trip around Cinco de Mayo. Though there are a few different cultural performances around the city, there are still so many other things that will occupy your time during your day trip.

Make sure that you add Puebla to your itinerary whenever you stay in Mexico City. It is the perfect day trip city to visit to round out your stay in the capital.