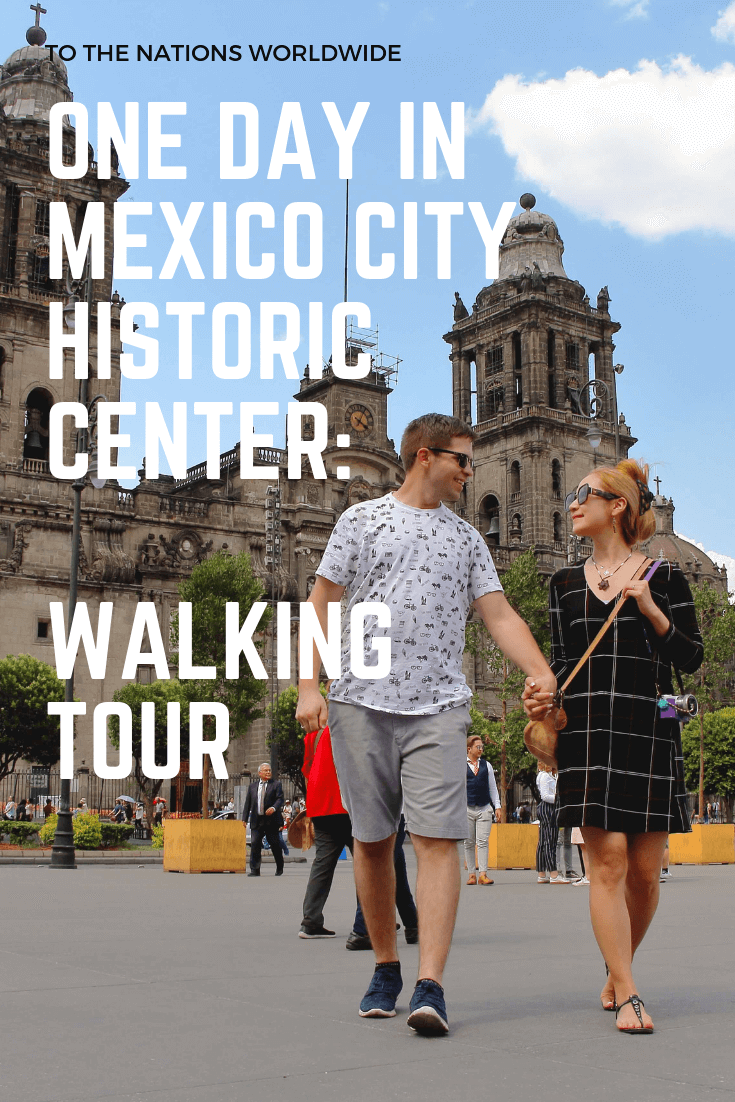 With so many things to do in Mexico City, it is difficult to suggest a one day itinerary. However, with so many attractions centered around the Historic Center of the city it seems like the perfect place to spend an entire day wandering around this area of the city.

There is enough in this area to provide you more than a day’s worth of things to accomplish if you are looking to see and do everything. Though we were able to make the most of our day in the Historic Center of Mexico City, we did not enter every attraction on this walking tour.

You will need to get up early and make the most of your day on this tour. Some things will not take a lengthy period of time, whereas others may take up hours depending on your style of travel and what interests you. This tour took us from 9 a.m. to about 6 p.m. with nonstop moving around and about 45 minutes to sit down for lunch and about 15 minutes to sit down for churros. 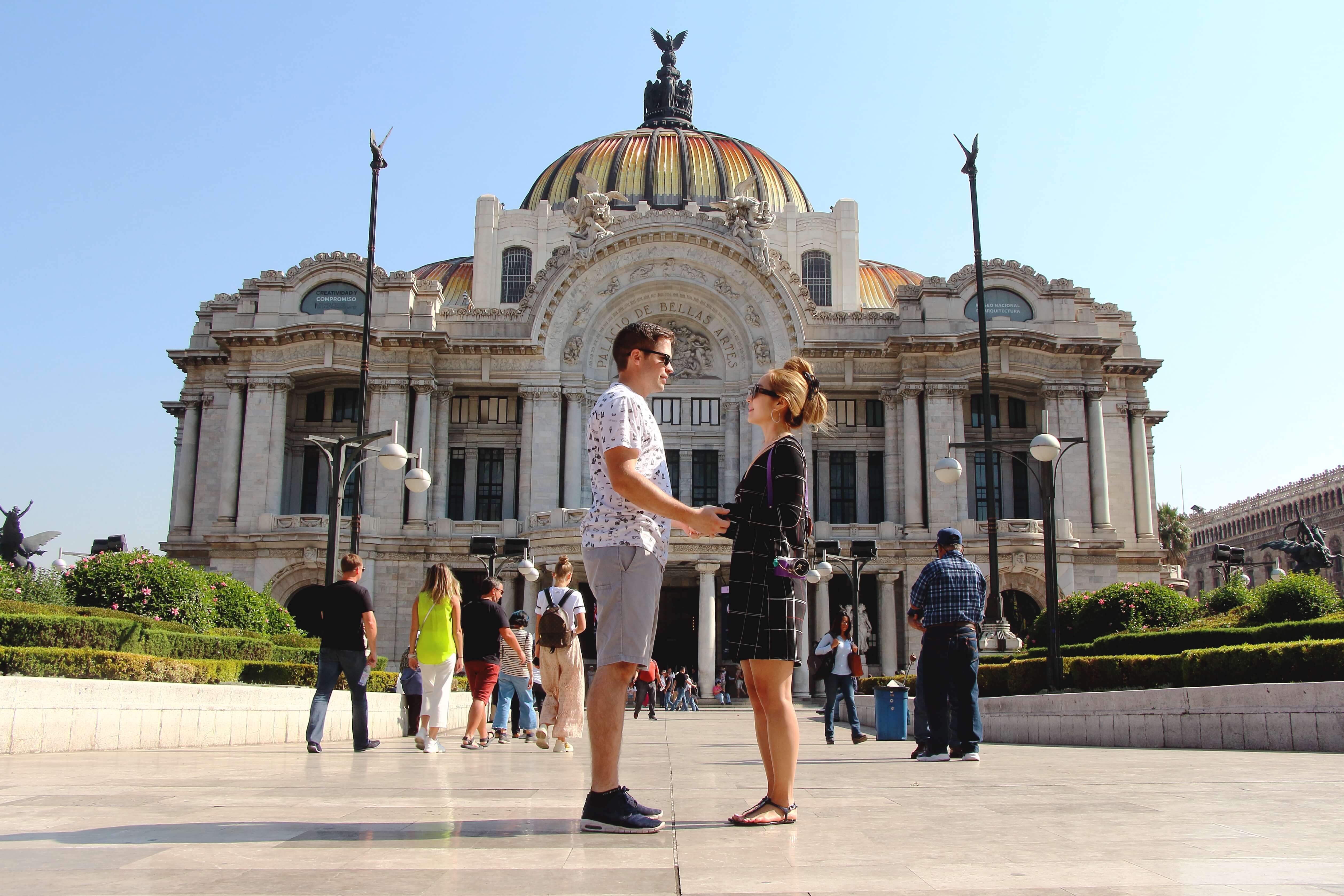 This building is the art center for Mexico. The magnificent architecture holds some of the best theater, opera, music, dance, and exhibitions of all sort that Mexico has to offer. This is the perfect attraction for those interested in seeing a show or exhibition that is going on at the time. It may be worth seeing what is happening when you are visiting Mexico.

When we were visiting there was an exhibition of paintings going on, but we did not have the time in the day to dedicate to this and were already going to see a lot of art exhibitions during our stay in the city. We more or less wanted to wander the grounds of this iconic building and marvel at the architecture.

While you are here, take a stroll through the Alameda Central Park through the gardens, statues, and water features. At the opposite end of the park from the Palacio des Belles Arts is Museo Mural Diego Rivera. 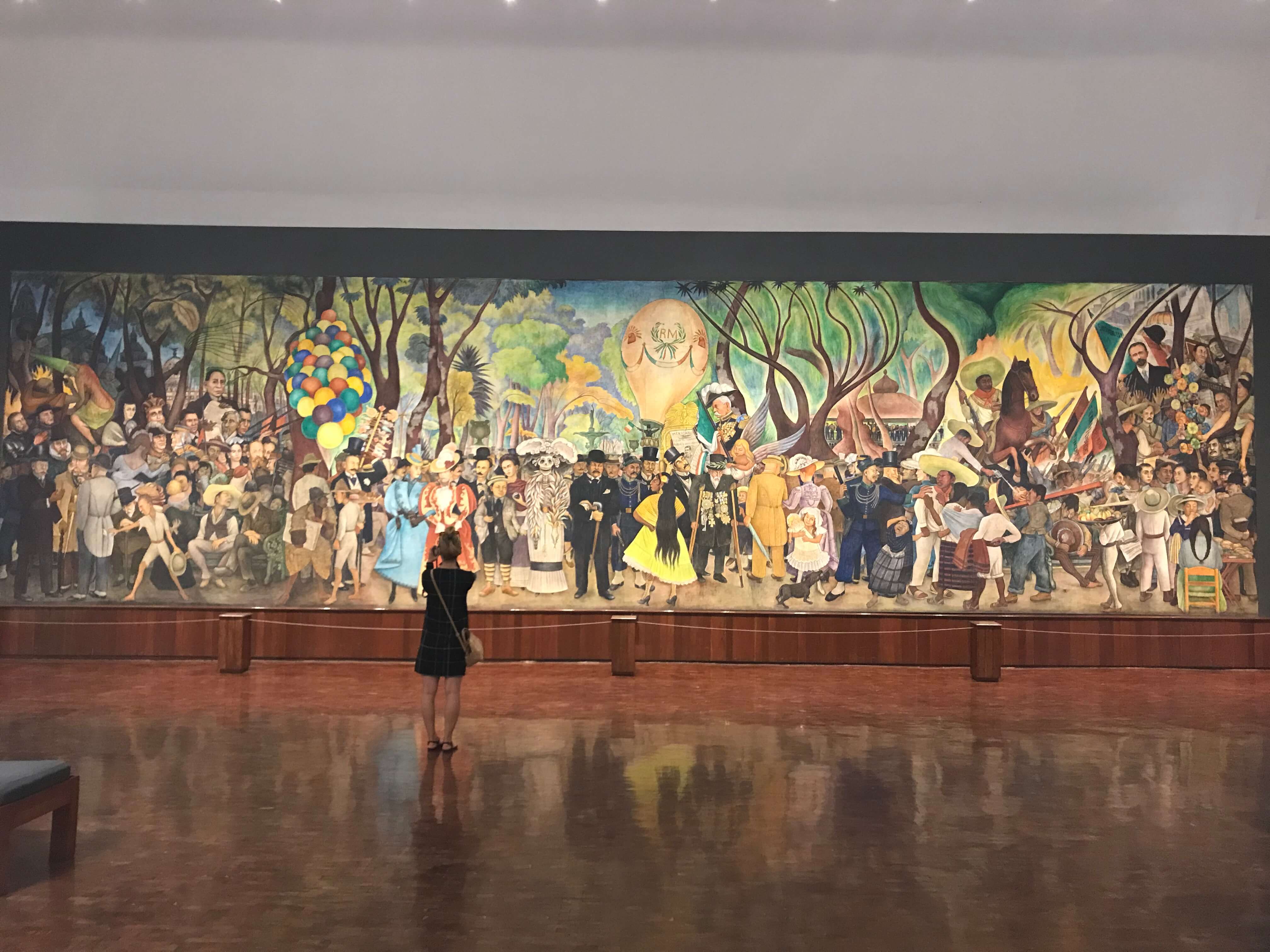 This is a small museum that houses Diego Rivera’s Sueño de una Tarde Dominical en la Alameda Central (Dream of a Sunday Afternoon in the Alameda Central) mural. It is more than worth the small price of admission of $35 pesos with an additional $5 pesos charge if you want to photograph.

Originally housed in the Hotel del Prado, this mural was moved to the current museum when the hotel was damaged in an earthquake in 1985. The mural was transported to its current location and the museum was built around it. This museum is also home to exhibitions and other conferences in the same space.

The mural was commissioned by the architect for the hotel and Diego Rivera painted hundreds of figures of all social classes from his life and memories including his previous wives and children, as well as prominent Mexican figures.

With this being so close to the previous attraction and taking less than an hour to see the mural, it is a must-do when in the Historical Center. Afterwards you can walk 15 minute south to do some shopping. 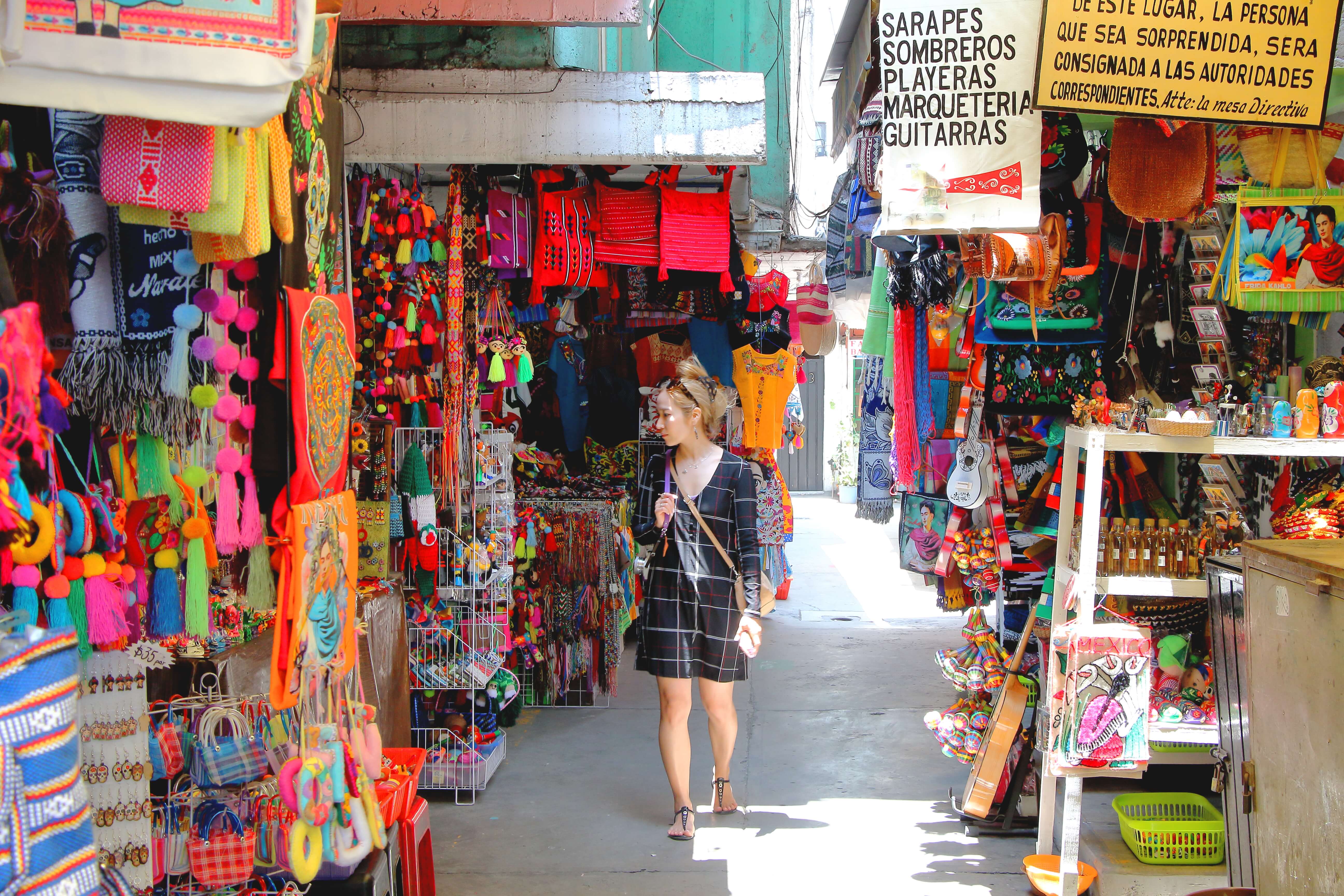 This is a market a short walk away from Palacio des Belles Arts. Home to hundreds of vendors selling souvenirs representing their culture and handicraft. Here you can find things like: tequila, shot glasses, lucha libre masks, leather products, hats, clothes, crafts, and so much more.

This was one of the better markets we visited while in Mexico City with good prices. Though some merchants accept credit cards, you may want to bring some cash along. You can easily lose yourself for an hour or so wandering the narrow alleyways that are lined with shops. We arrived at 10 a.m. on a weekday and it was very quiet as shops were just beginning to open or others had no shoppers in them.

From here, you may opt to take an Uber to the next stop as it would be about half an hour walk to get some lunch. 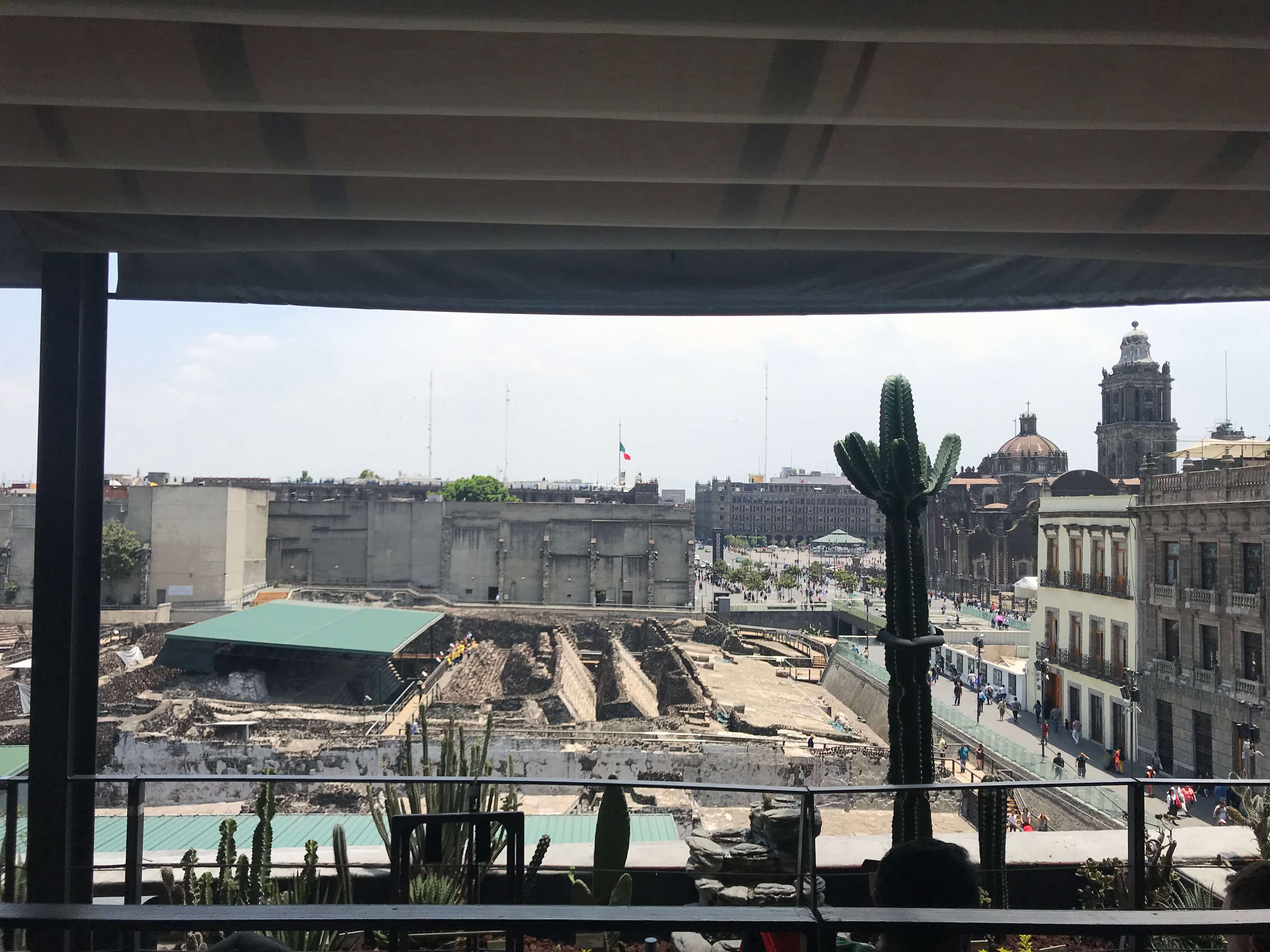 This was the main temple of the Mexica peoples who populated what is now Mexico City. It was destroyed and rebuilt on several occasions, the last by the Spanish in the 1500s. The remains are part of what is Zocalo, the main plaza of Mexico City.

You can wander the walled archaelogical site and take a step back in history in the middle of Mexico City by experiencing this temple.

At $70 pesos, this would be an excellent place to wander around for an hour or so after lunch. Though we did not enter, we did eat above it with a view into the entire site from El Mayor and walked around the outside to learn more about it. By this time it was about an hour from closing so we were ready to explore more of Zocalo and the Historic City Center.

Estimated Time: Varies
Hours: Open all day. Different hours of operation for the Cathedral and National Palace.
Admission: None 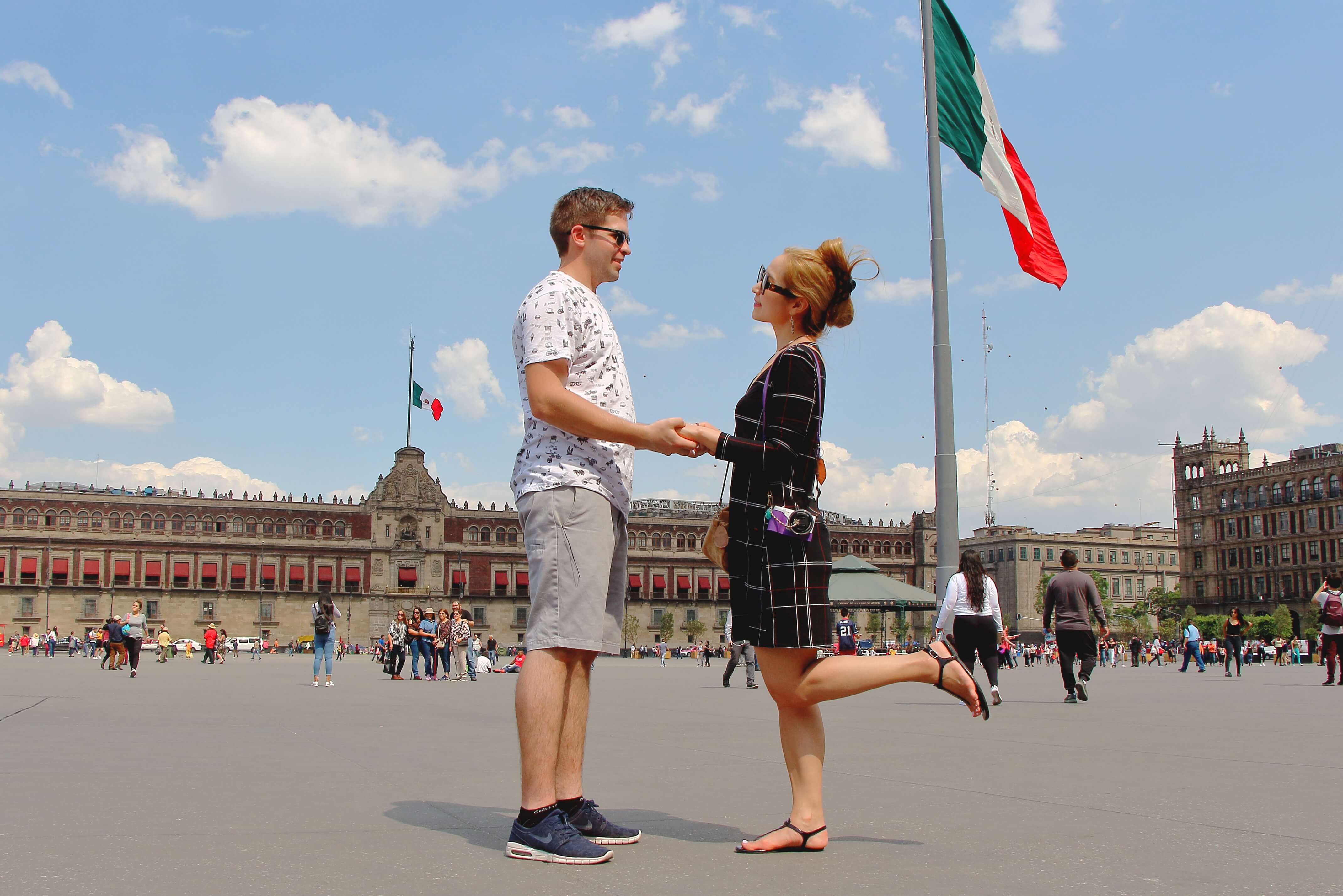 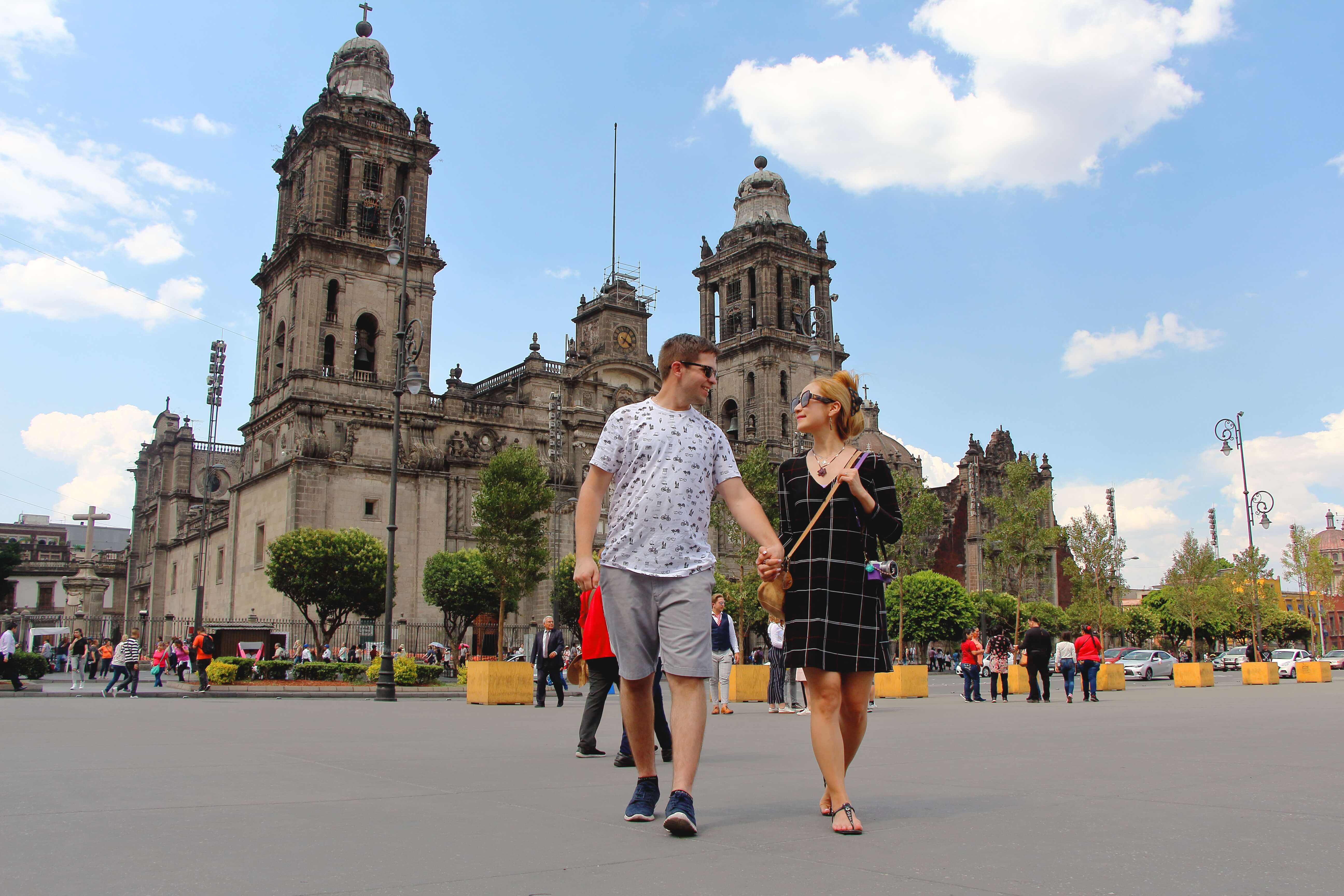 As mentioned earlier, Zocalo is the main plaza of Mexico City with various historical buildings surrounding it. On one side is the National Palace. You can enter to see more of Diego Rivera’s murals, the different offices, and the outdoor space. The other side of the square is another judicial building. And on the other side is the Catedral Metropolitana de la Ciudad de México, or the Mexico City Metropolitan Cathedral. A truly incredible architectural structure built on top of temples and displaying some beautiful works of art. It may be beneficial to book a tour for these attractions to really appreciate the history behind them.

Continuing on our walking tour from Zocalo is a street on the opposite side of the National Palace which will lead you to the Torre Latinoamericana and all the way back to Palacio des Bellas Arts within about 15 minutes of walking through a crowded commercial shop-infested pedestrian street. 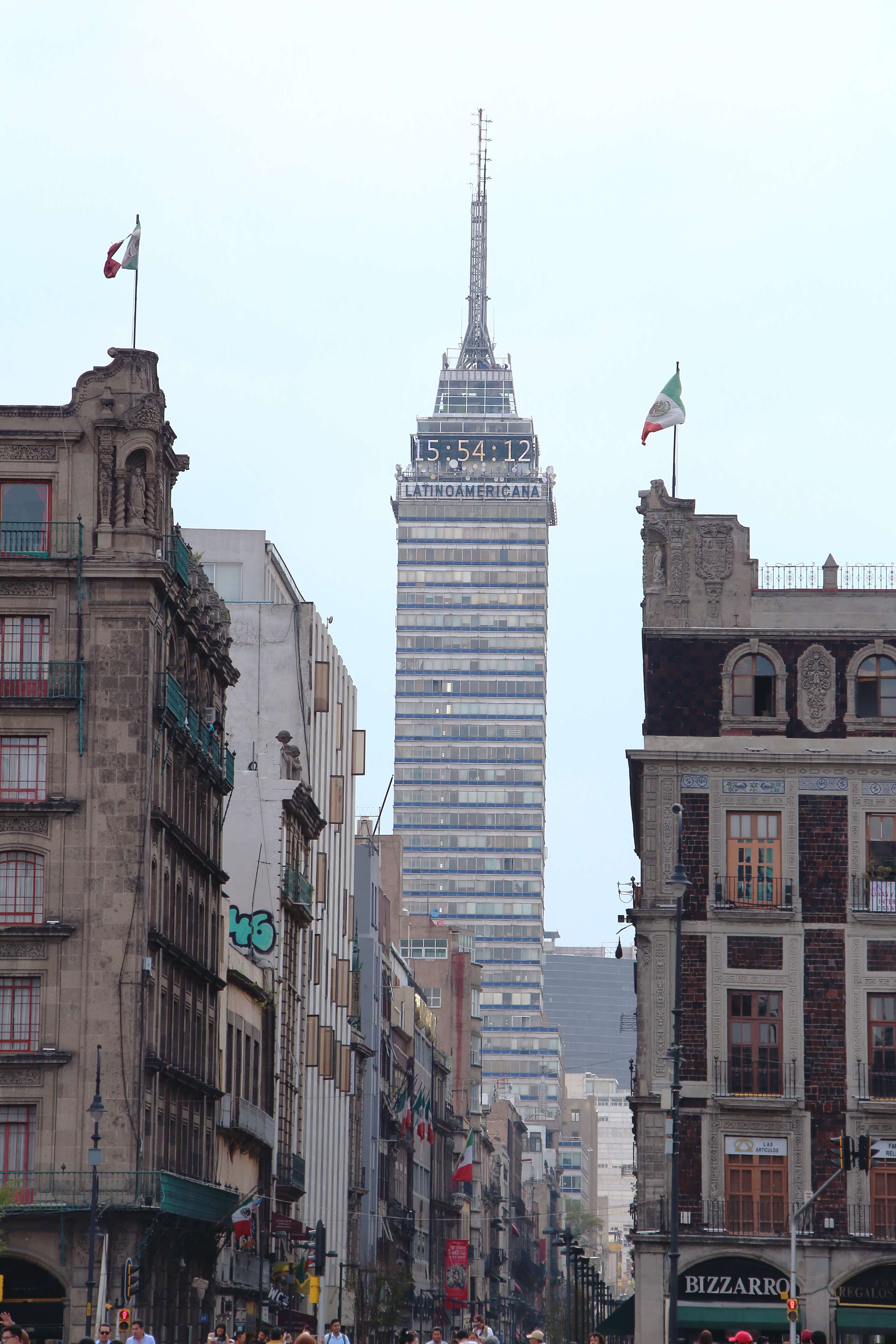 Opened in 1956, this landmark is known internationally as it is the first of its kind to be built on top of seismic active land having had no damage done to it during a massive earthquake in the 1980s.

You can pay to ascend to the top and lookout to the 360 degree view of Mexico City and the entire walking tour that you embarked on. There is a restaurant, souvenir shop, snacks, and a virtual reality game at the top as well.

If you want to be able to take photos at the top, you will need to use your phone or a basic camera. Cameras with attachable lenses are not allowed and I had to leave mine in my backpack that I was able to still bring with me to the top. 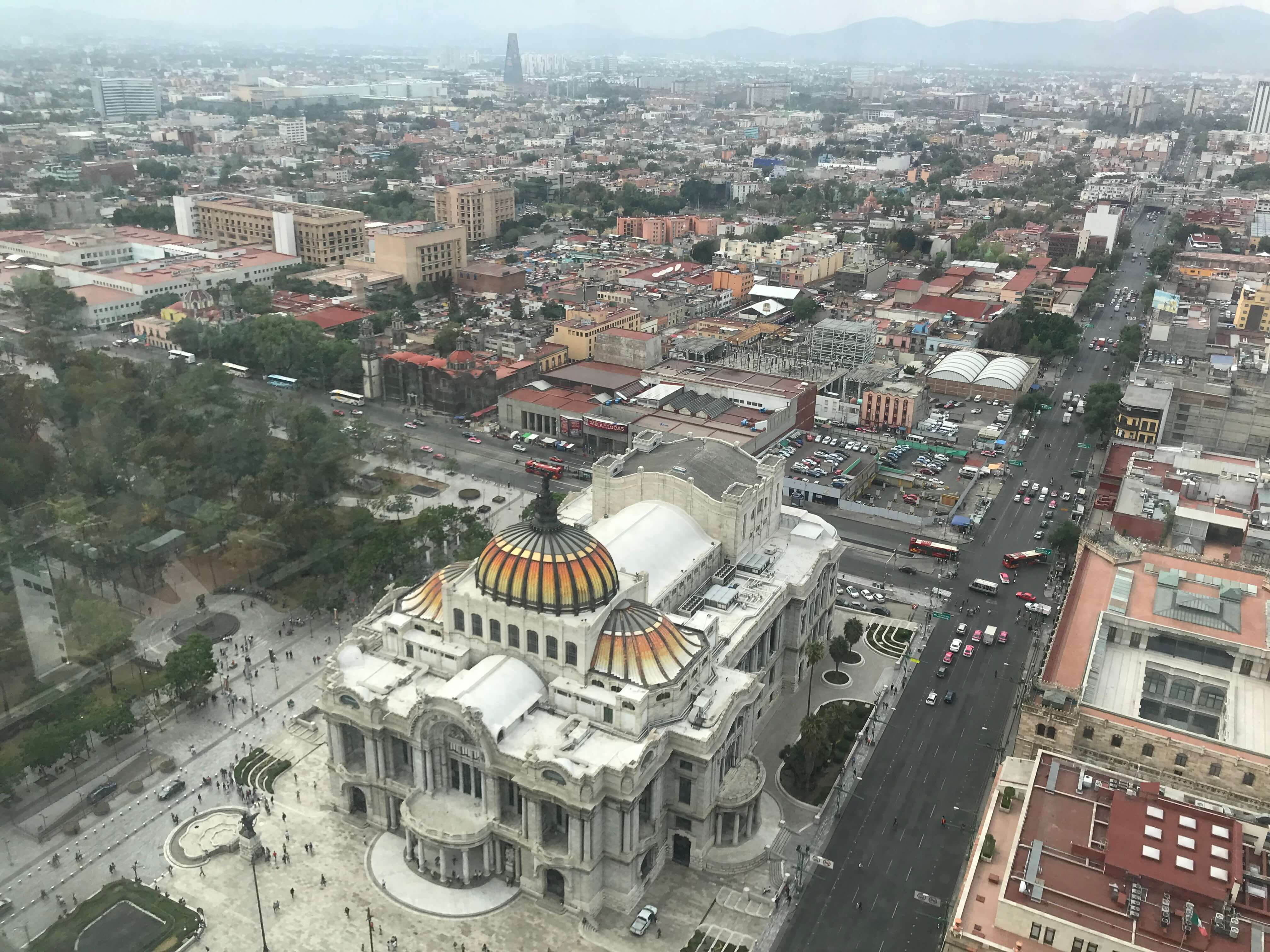 After your tour of this iconic landmark, it is time satisfy your sweet tooth at El Moro and perhaps call it a day.

With only so many restaurants you can visit in a packed day of attractions, there are two clear places to visit when in the Historic Center. 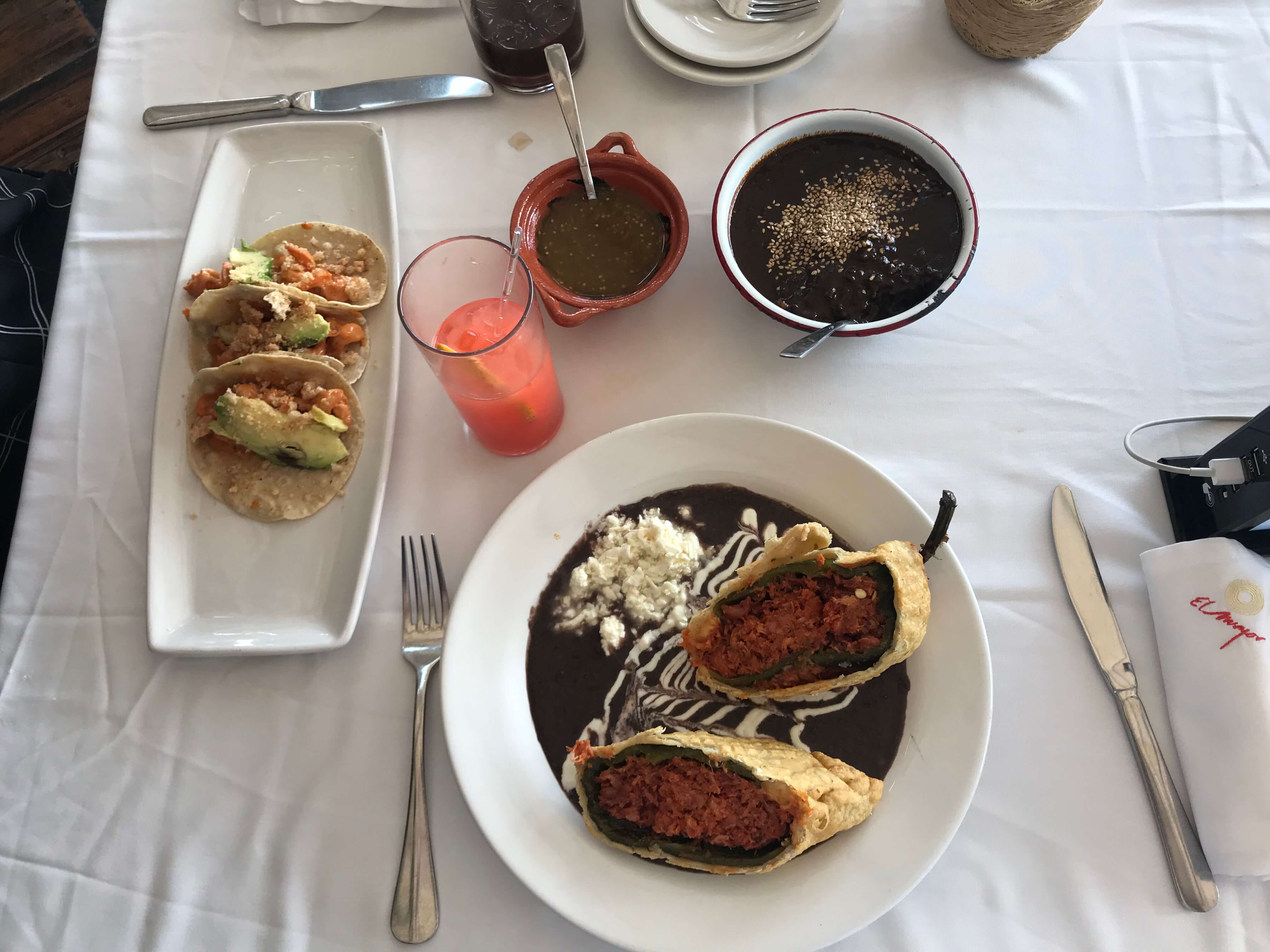 El Mayor is a restaurant on the second floor of a book store that overlooks Templo Mayor. It really provides the best view of the temple and a part of the Zocalo which is lined with historic buildings. There may be no better place to eat that serves traditional Mexican food with a modern twist, has good prices, and has a view as good as this.

We ordered the Mole on rice (a sauce special to Mexico), Chile relleno de chicharrón prensado (a fried and stuffed chile pepper), and shrimp tacos (shrimp in tacos). 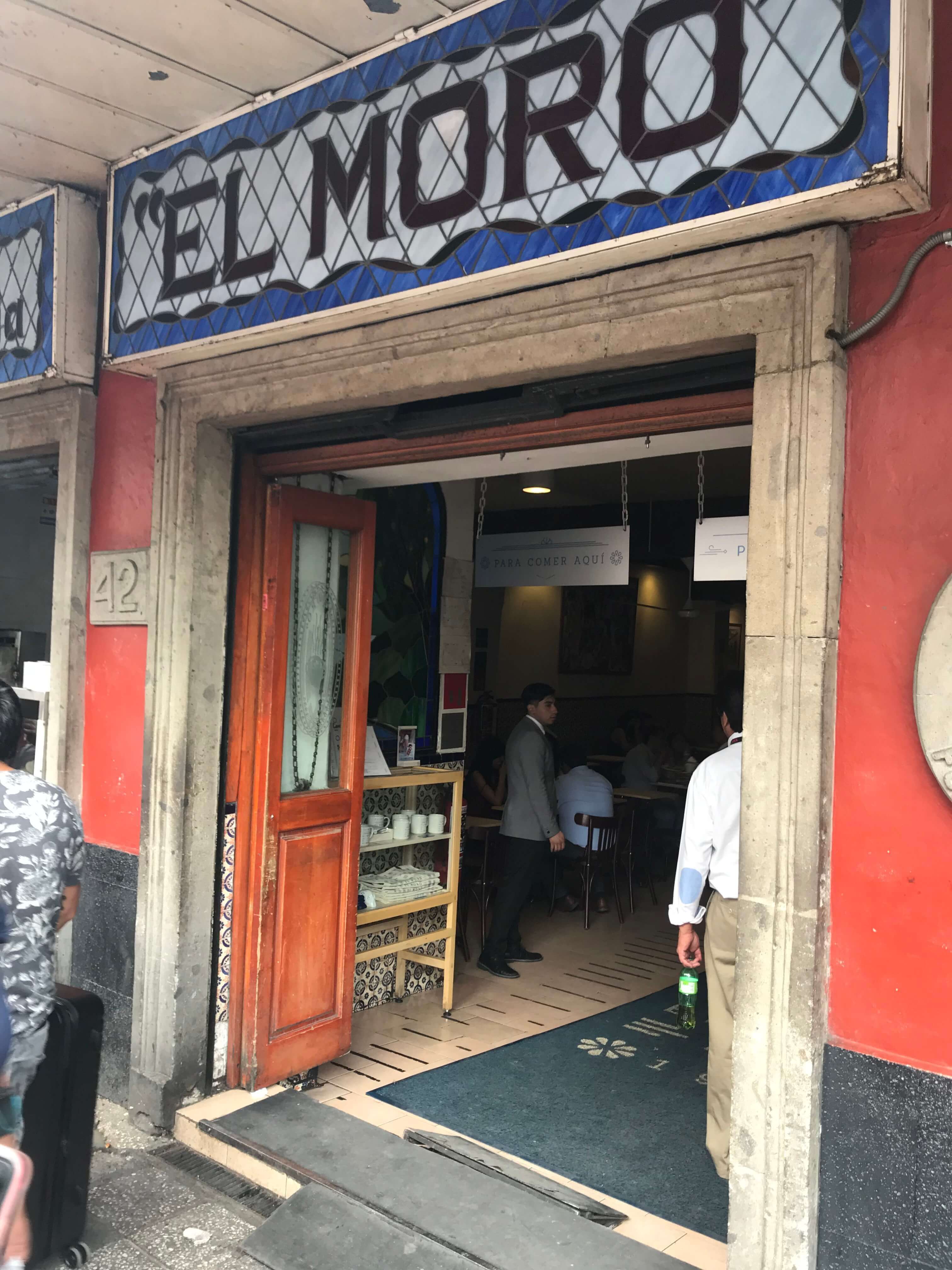 If you are looking for something to satisfy your sweet tooth, then El Moro is the place to be. It is a churreria that was founded in 1935 by a man from Spain who sold churros in the Zocalo before finally moving in to a permanent building.

Here you can find all sorts of sweets on the menu including chocolates, shakes, drinks, desserts, and of course churros. We tried a little bit of everything on the menu including churros, a couple of other small desserts, hot chocolate, a raspberry ice cream sandwich, and a strawberry milkshake. You can watch them make everything from the outside of the shop and enjoy it in their restaurant. You cannot miss this place during your visit to the Historic City Center. 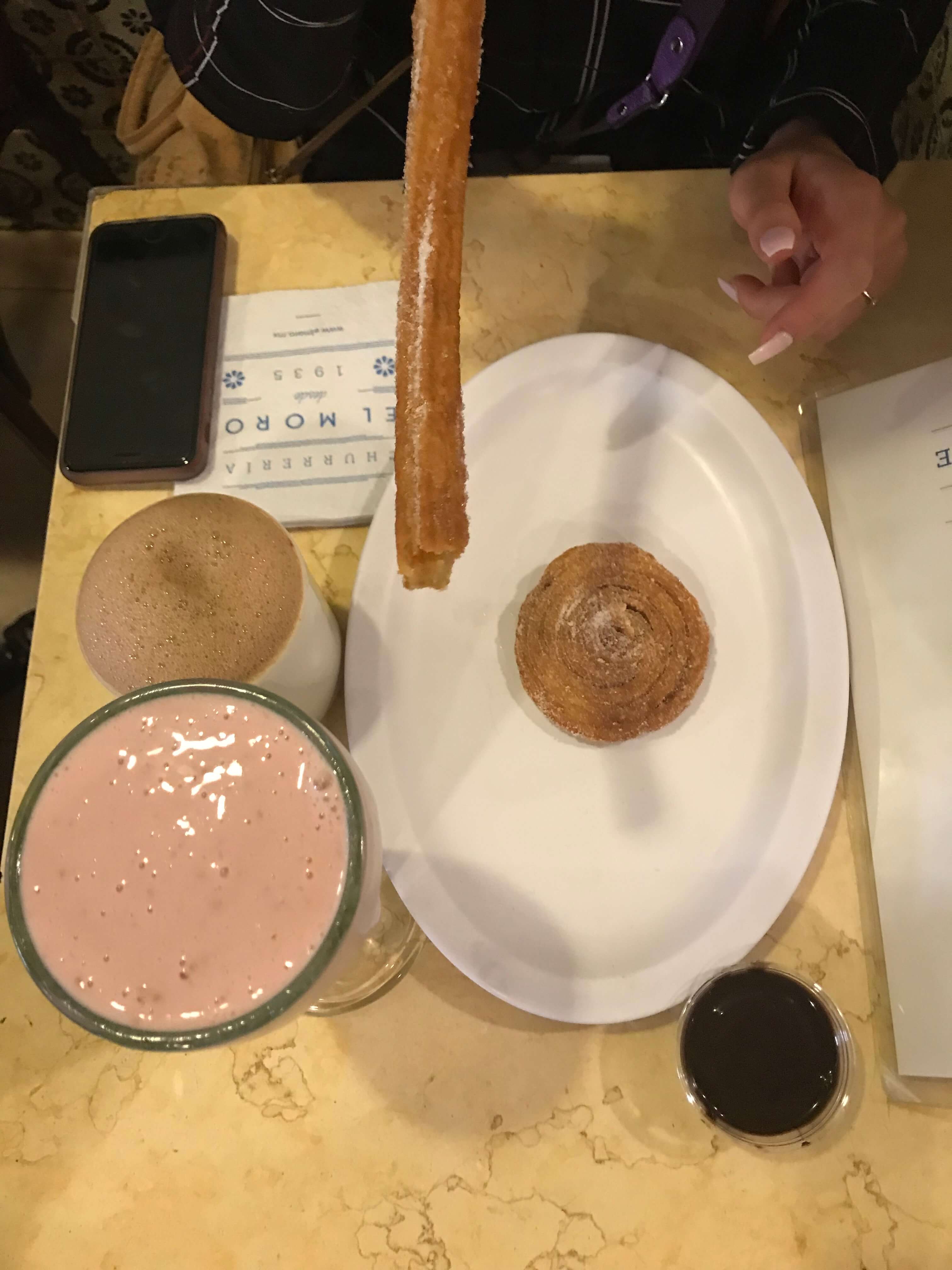 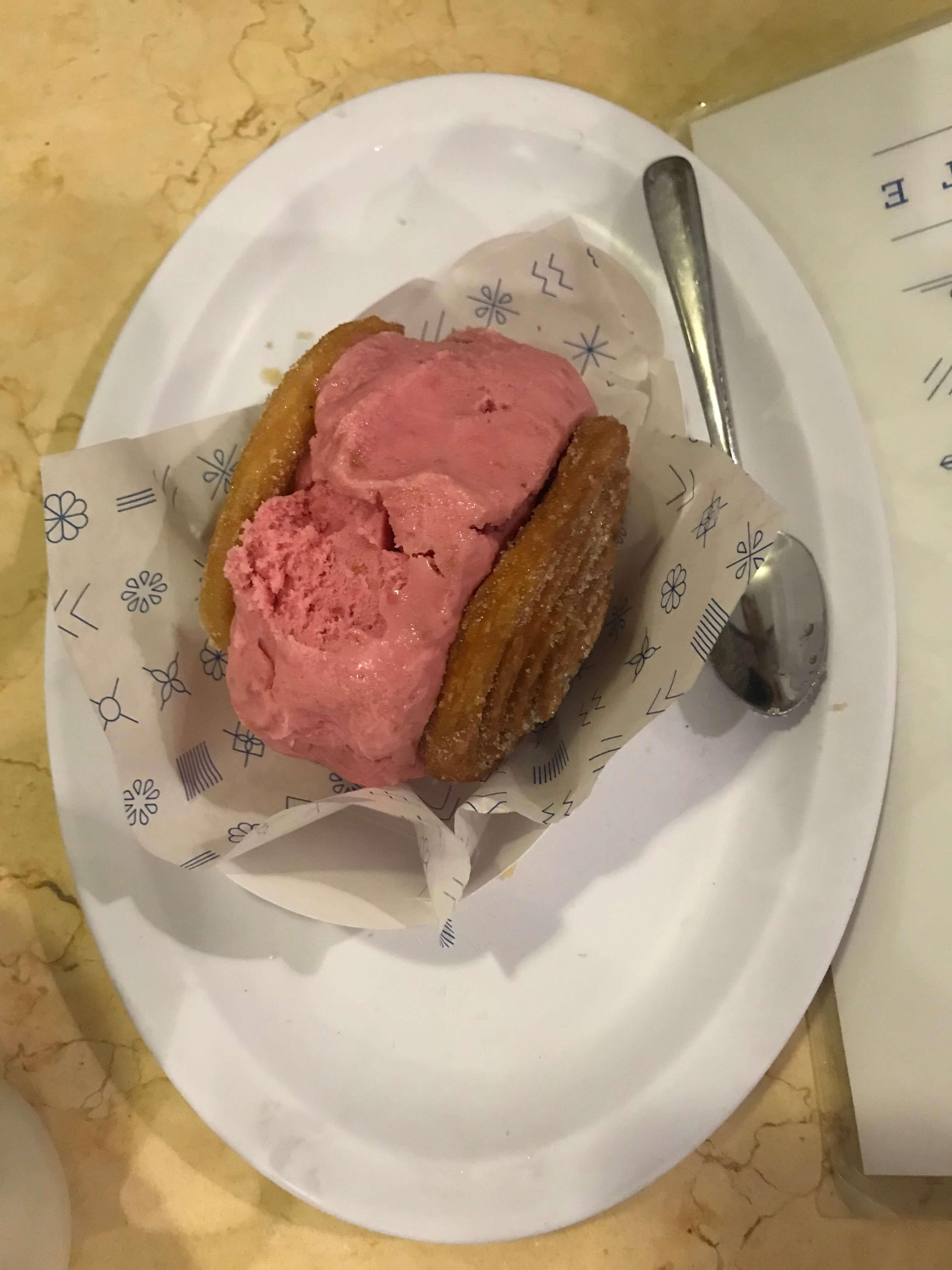 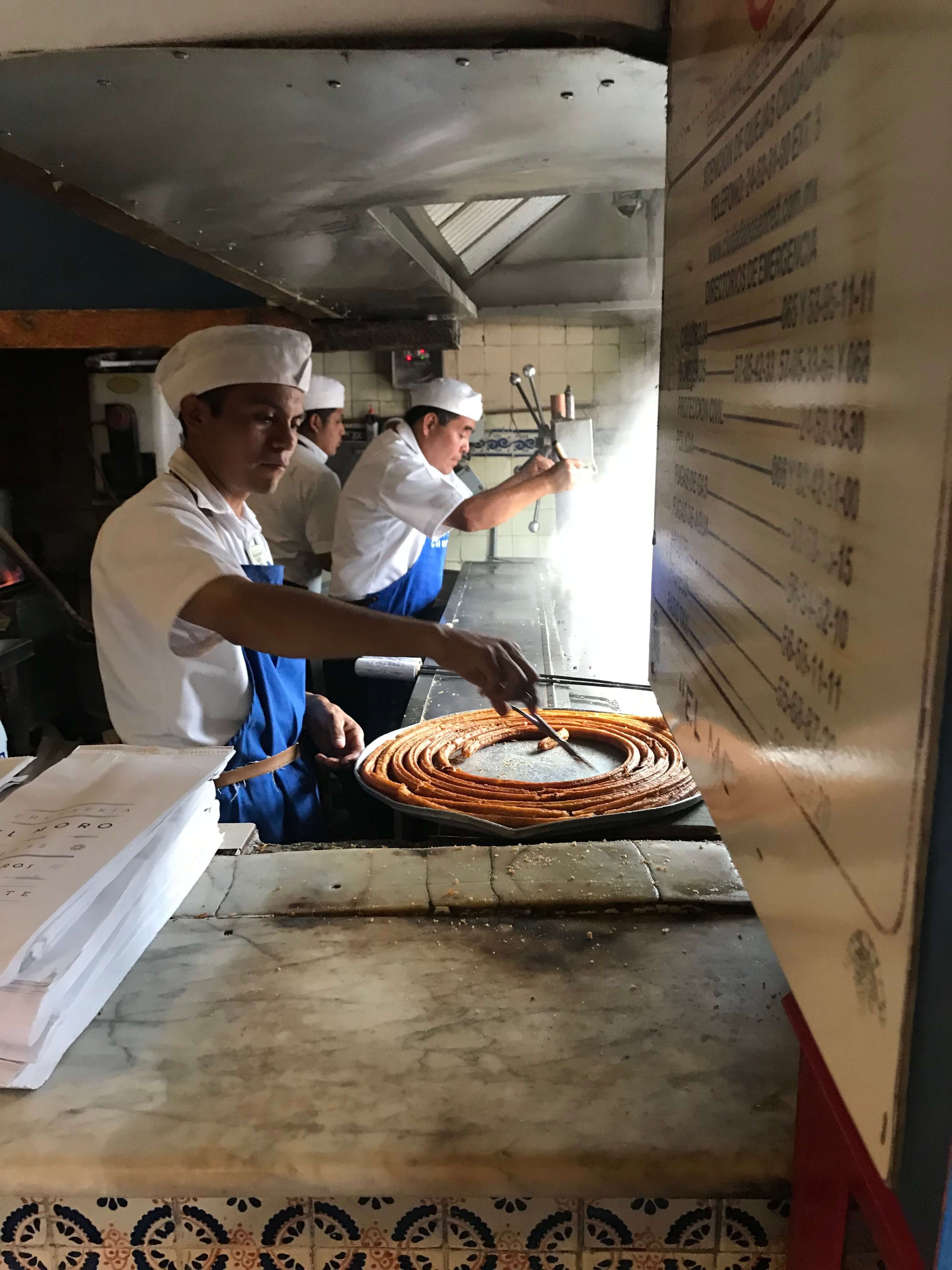 Getting Around Mexico City

As with many other major cities, you have a wealth of options to choose from to get from point A to point B. Mexico City is no exception.

However, our number one favorite choice to get around without a doubt would be Uber. It was incredibly inexpensive and safe with a long trip across the city costing no more than $100 pesos. And that would be a rare trip that would take close to an hour. We had heard from our host that other guests had been pick-pocketed on buses and in the subway. Once we took our first Uber, we knew that this would be our primary means of transportation in the city.

You also have public buses, the subway, and taxis to choose from. As mentioned above, you will have to be mindful of your surroundings when in these places. You will save a small amount of money and lose some time with these methods. Taxis in Mexico City looked all beat up and did not look like the type of vehicle you would want to get in to. Just make your life easier and opt for the Uber.

Another option if you are willing to have a long day would be to do the Hop-on Hop-off bus tour that is offered in most major cities. It covers a lot of great spots throughout the city. But to really make the most of your money for your tickets you will want to get up early and stay up late. 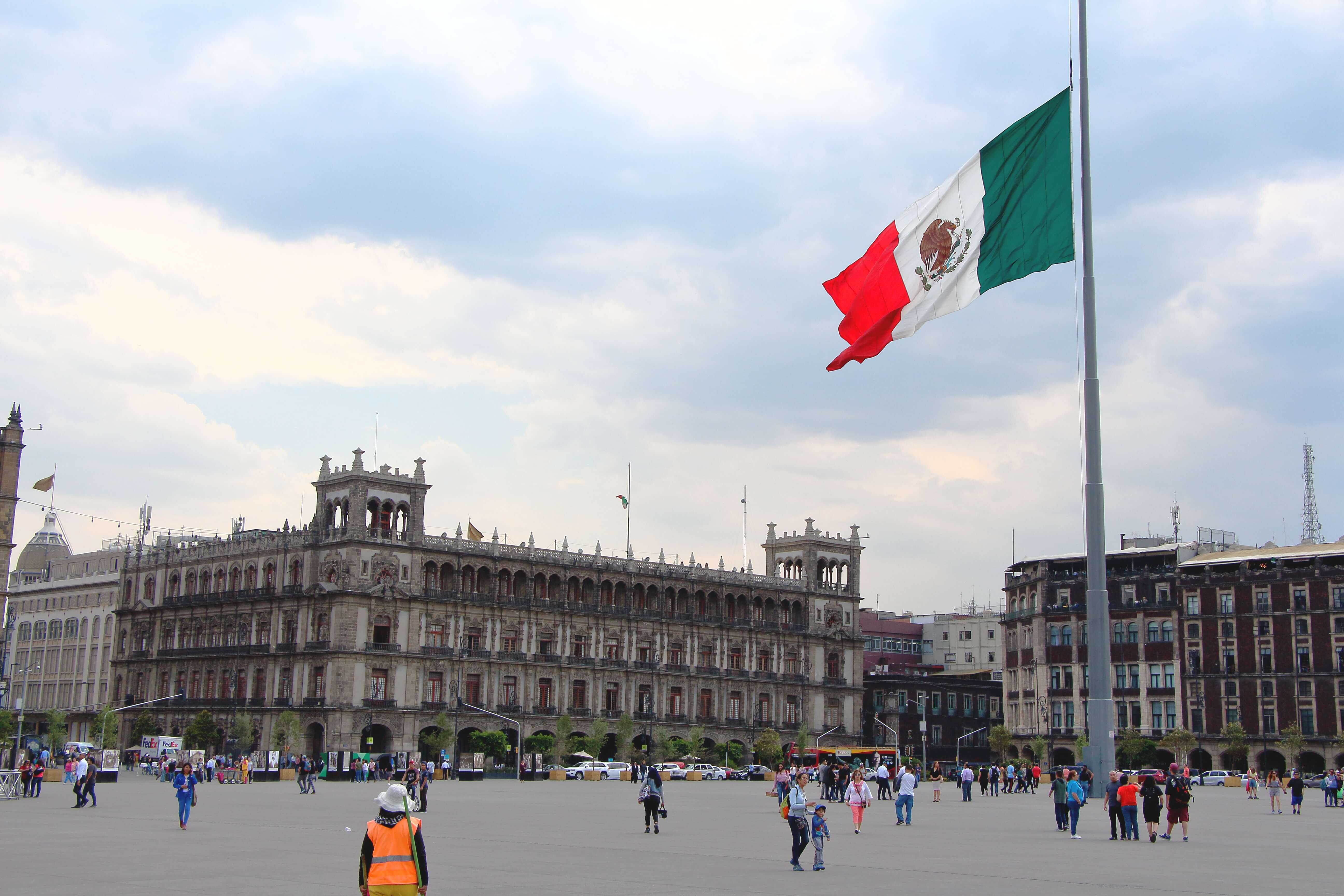 Though we had a full week in Mexico City, this was the best thing to recommend anyone visiting the city for just one day. A walking tour of the Historic Center will keep you active, seeing a handful of different attractions, and keeping you fed without having to get from one place in the city to another spending time and money on transportation costs.

If you follow this walking tour you will be able to make the most of your time in the city and get to see what makes it such an alluring place for any traveler. Architecture, art, history, and food, this area of Mexico City has everything you will want from it.