Traveling the surface of the world is our passion. However, just below the surface is a whole other world to be traveled. One that we have not adventured too often. While on O’ahu in Hawaii, we made sure to visit and try snorkeling Hanauma Bay Nature Preserve, the best snorkeling in O’ahu. It was worth every moment, and we never wanted to leave.

Attraction: Hanauma Bay Nature Preserve
Where: O’ahu Island, Hawaii
Type: Nature / Snorkeling
How: Driving there from Honolulu takes about 30 minutes. Get there early so you can get one of the few parking spaces. Alternatively, you can book a bus ride there from the Waikiki area.
Cost: $7.50 USD per person for the entrance fee. The snorkeling set costs $20 USD to rent.
Hours: 6:00 a.m. to 7:00 p.m. everyday except Tuesdays.
Duration: Are you a beach-goer? Could you spend the entire day in the sun or snorkeling in the ocean? You could be here for an entire day. We spent our morning on the beach and snorkeling in the ocean.
Summary: The Hanauma Bay Nature Preserve is on the east coast of O’ahu. It is a gorgeous bay that is famous for snorkeling. For those interested in snorkeling while on the island, this is where you will want to go.

Hanauma Bay Nature Preserve is about a 30 minute drive from Honolulu. After reading that we should be there as early as possible to get a parking space, we got up at 6 a.m. The forecast called for rain, and we were going to judge it as soon as we woke up. Unfortunately we heard the clattering of rain drops outside and immediately thought it would not be worth it to go to the bay for the day. However, with a lack of other options that kept us out of the rain, we chose to stick to the current plan and brave the rain. We needed to get ready and pickup my parents from another AirBnB just a two minute drive away. Once we were all in the vehicle, we began the short drive away from Honolulu.

Leaving Honolulu around 7 a.m., we stopped off at a plaza just ten minutes from the bay to get breakfast and a much-needed coffee. Once we arrived at the bay around 7:45 a.m., we found that the parking lot was already half occupied. Breakfast was finished in the parking lot, and our stuff was gathered while we made our way to the entrance to pay the admission fee.

For every non-Hawaiian resident, you must watch a short 15 minute video that discusses snorkeling, safety, and how to preserve the reef and living species. You MUST watch the video, but if you plan to be back in the next year you can sign a paper at the end so that you do not have to watch it again on your next trip.

From the entrance, the beach is a five minute downward walk. Rides down and back up the hill to and from the entrance are also available for a small fee. We opted to talk the walk down the hill, while on the way back up at the end of the day we chose to take the $1.25 USD ride after an exhausting half-day of swimming.

Once at the beach, it was 8:30 a.m., and we were able to find a spot with lots of room. We settled into our spot, and made our way to rent snorkeling equipment. Snorkeling equipment cost us $20 USD per person for the day and included a mask and snorkel. Fins would have cost more. In addition to the snorkeling equipment, you can also take scuba diving lessons.

By the time I took the snorkeling equipment into the water, I was not anticipating a lot. I had wandered by the information desk to see the different types of fish in the bay and the movie was also informative. However, at the time I expected to spot just a few fish given the amount of people in the bay (not a lot at this time of the day, but I figured the fish would not stick by even if there were a few people in the bay). Nonetheless, I was excited to use my GoPro for the first time in the water. 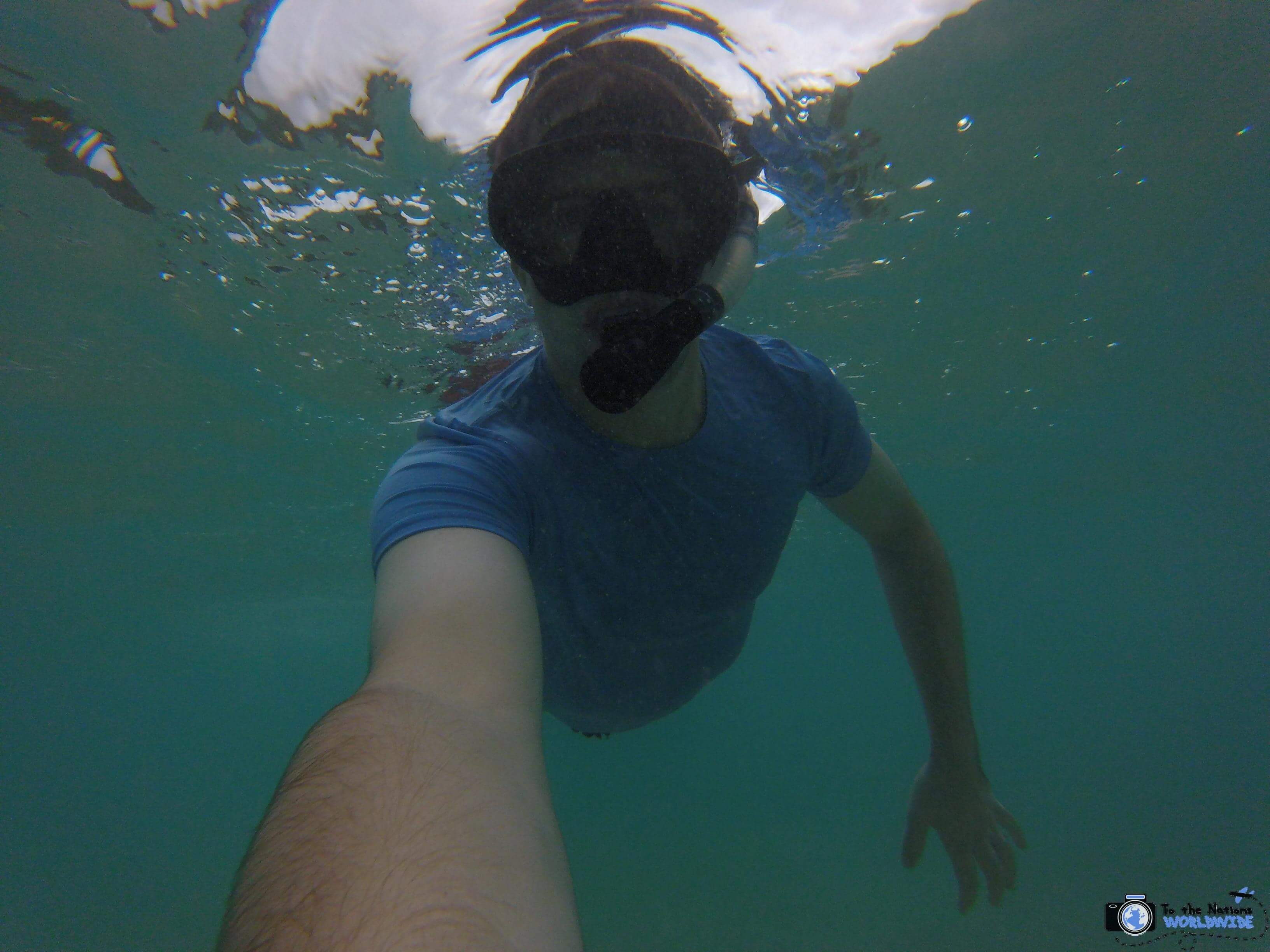 I strapped on the mask, put the snorkel to my mouth, and held the GoPro. I dunked myself into the water and almost immediately saw fish around me. It was incredible. For someone who has never been scuba diving, and only once before has snorkeled in the ocean, the amount of fish around me was something I had never experienced before. I immediately fell in love with it. 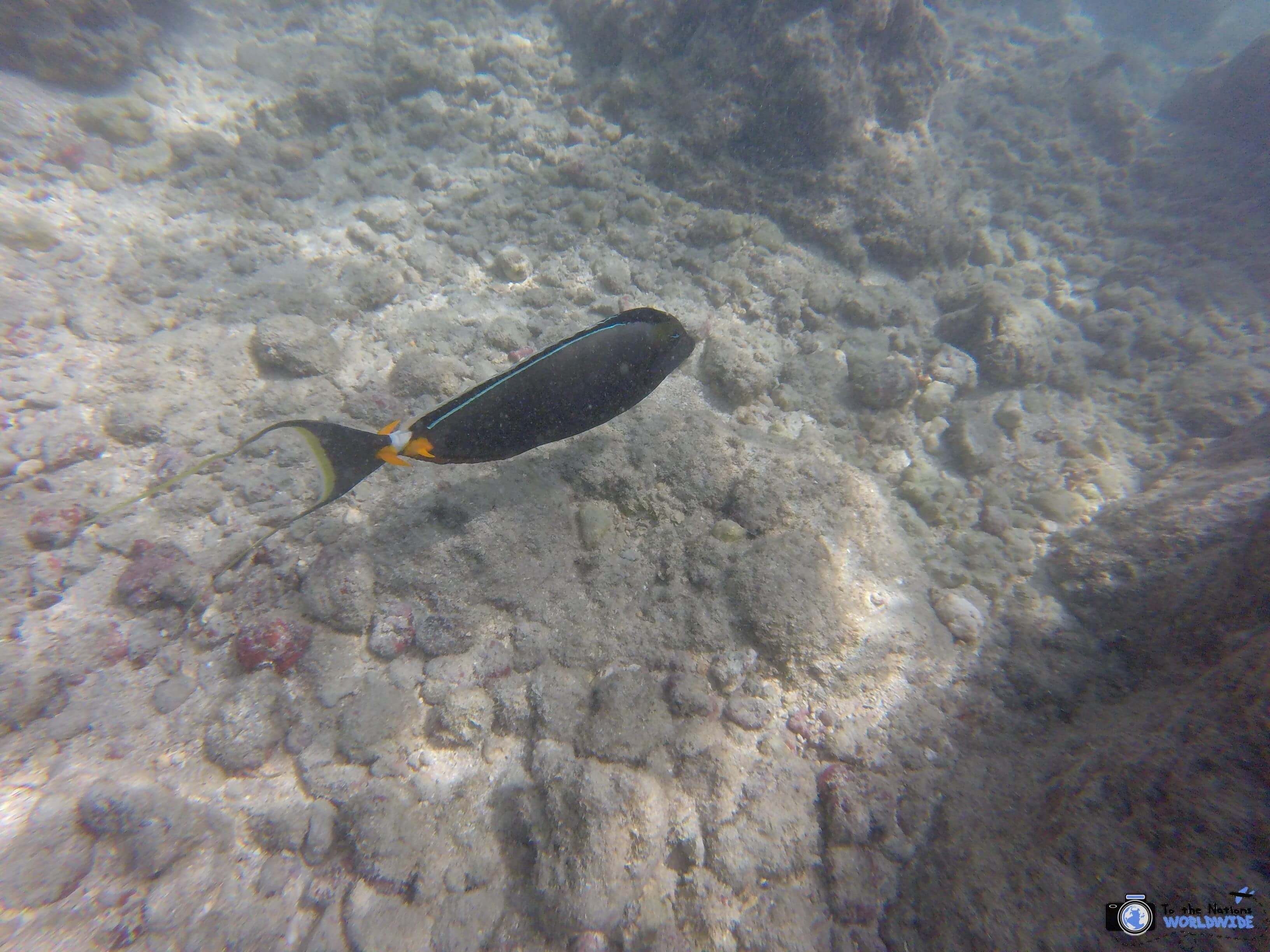 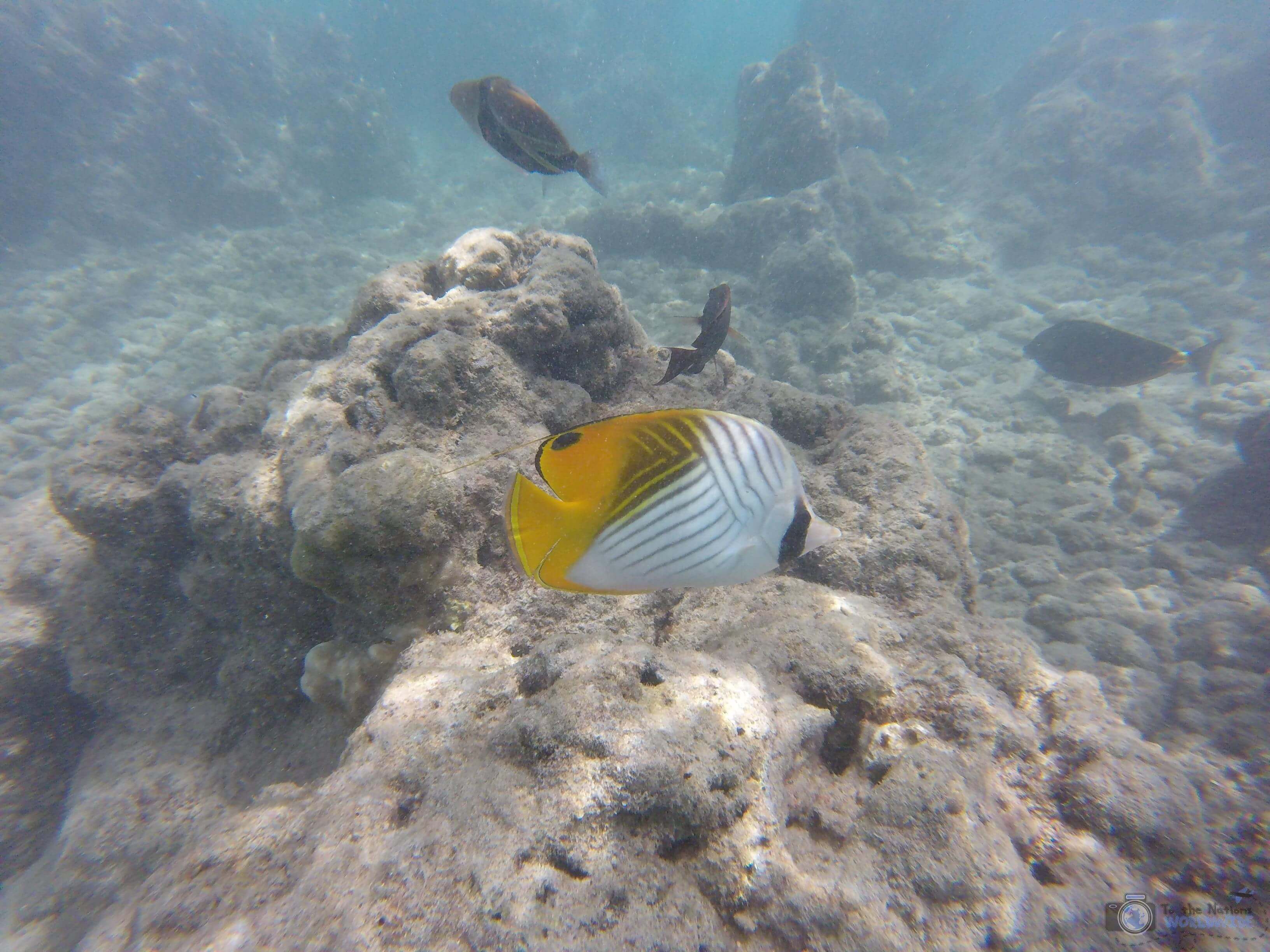 From seeing an eel to various species of fish, including the humuhumunukunukuāpuaʻa, or reef triggerfish, the Hawaiian state fish. For the most part, the fish were not easily startled. Of course you should always stay within a safe distance from the fish and not feed them in anyway. 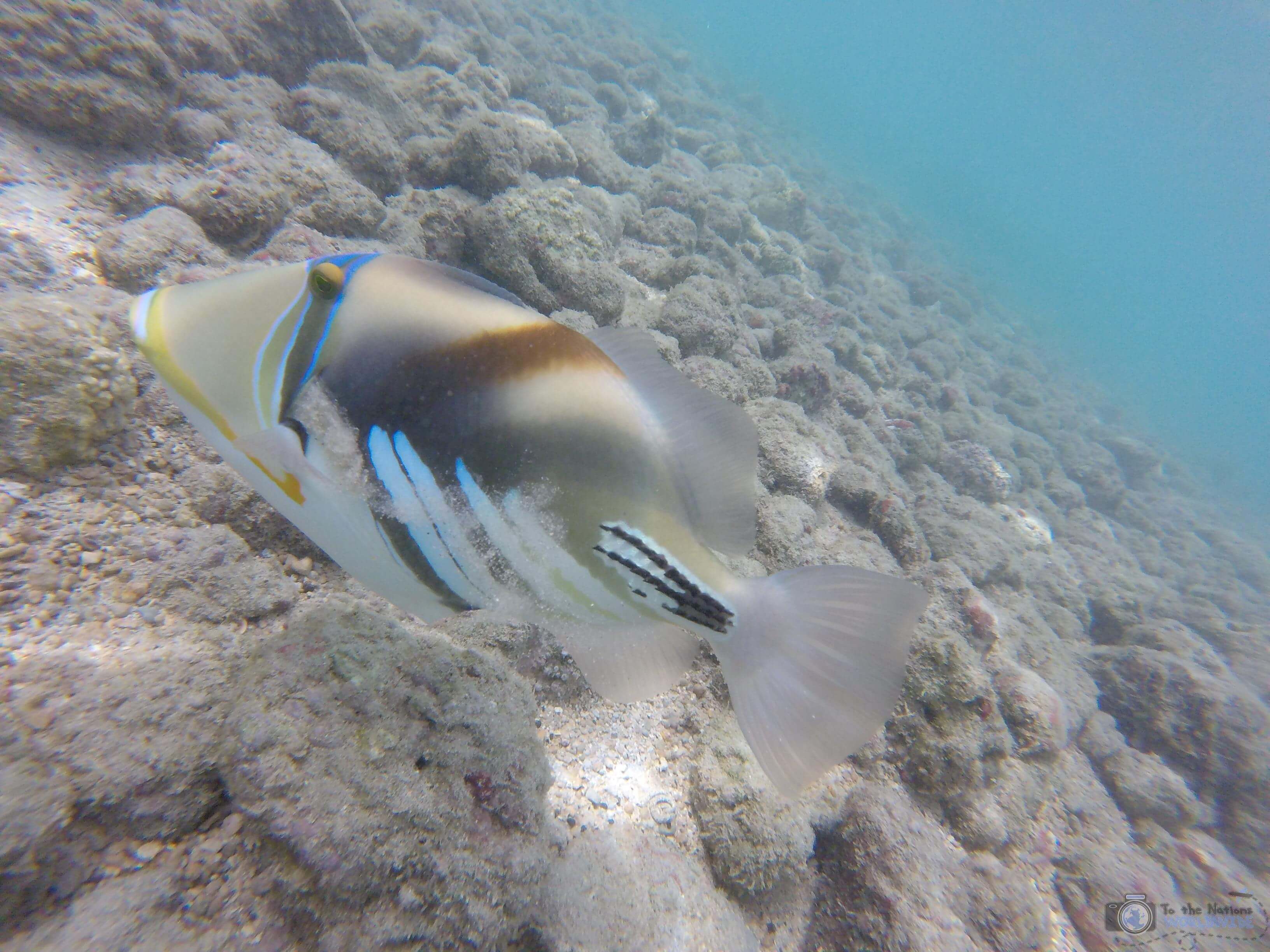 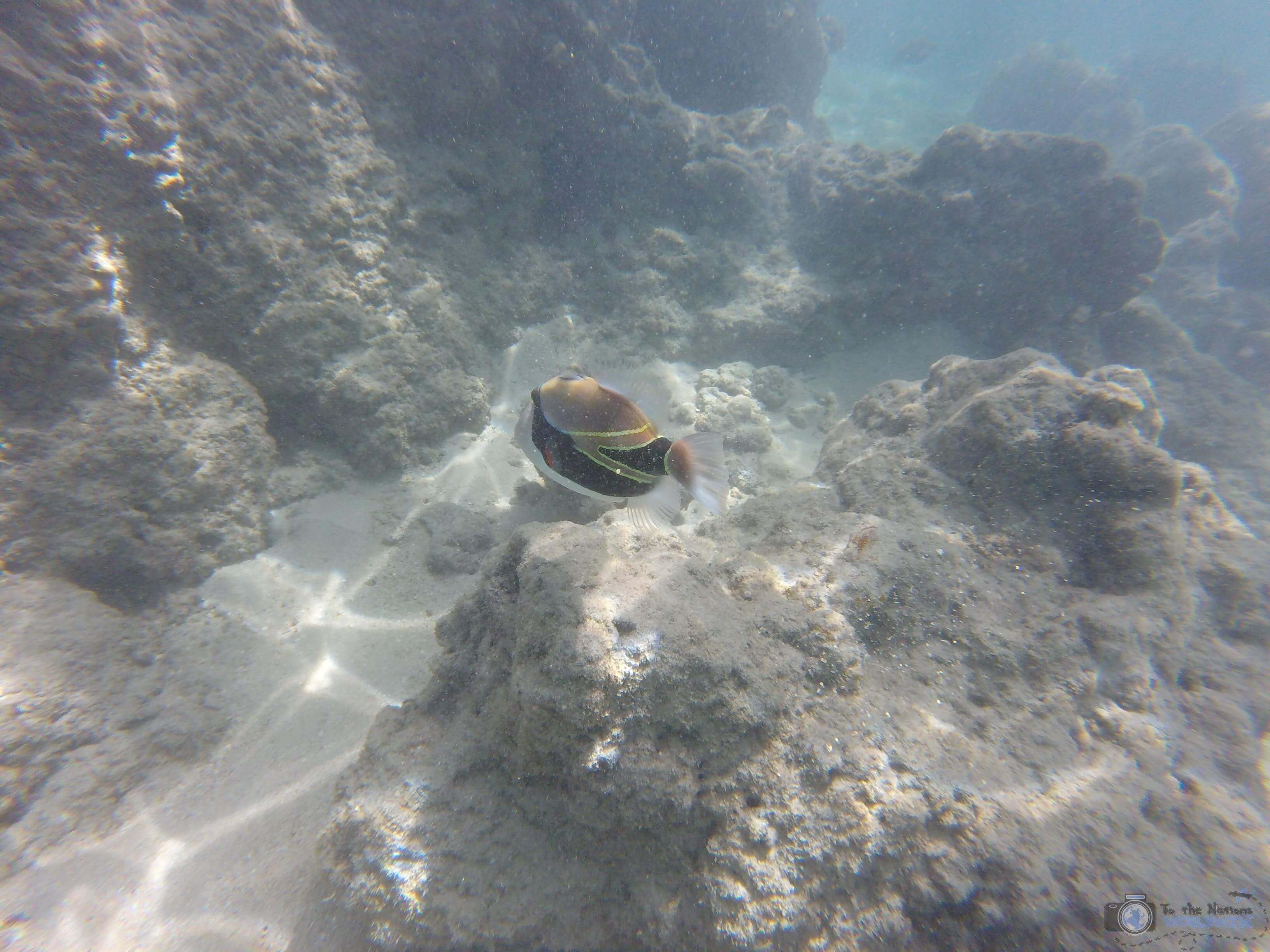 At one point, a massive school of fish swam right beside me. They came out of nowhere as I was wading in the water looking around me. One quick glance to the right, and then back to the left I noticed a school of fish grow larger and larger as they let the waves carry them closer to the shore. Because of the shallowness of the reef, I was not able to follow them.

I had never been to such an amazing place where you could see such a vast range of species in such large quantities from the moment you reach ankle-deep water. We began our vacation with the Hanauma Bay Nature Preserve, and it remained one of the highlights from the trip. It was near impossible to match that level of excitement I felt for the remainder of the trip.

We packed up as the sun beat down on us at 10:30 a.m. With about two hours of snorkeling Hanauma Bay, and the bay became increasingly crowded by the minute, and a sunburn beginning to form, we knew we had seen the best the bay had to offer before the crowds did. Not only did we luck out with timing, but we also missed the rain. With no raindrops falling on us throughout the time at the bay, we knew we had the best time possible.

The Best Snorkeling in O’ahu

Though we have not been snorkeling around the island much, from our experience I feel we can consider Hanauma Bay the best snorkeling in O’ahu. It was the highlight of our short trip to the island. Being under the water and among a school of fish or hovering over an eel weaving through the coral was enough to make me want to get more into snorkelling or maybe diving in the future. Should you prefer to go diving during your time in Hawaii, check out this Hawaii diving spot review.

If you decide to visit the Hanauma Bay Nature Preserve, I suggest you follow our advice and show up as early as possible. We visited Hawaii in September and by 7:45 a.m. the parking lot was more than half full. This was possibly helped by the fact that the forecast called for rain all day. As soon as people realized that the rain was not coming, the bay began to draw more and more visitors. It is visited by 3000 people per day. It is open from 6:00 a.m. to 7:00 p.m. every day except Tuesdays when it is closed to allow the fish to feed without interference. Shuttles are also available from Waikiki, but must be booked in advance. There is a snack bar available near the parking lot. We highly recommend paying the bay a visit whenever you find yourself on O’ahu. Visit the Hanuama State Park website for more information.

It is important to preserve these natural pieces of our world. They are extremely fragile and can be destroyed if we do not care for them. The Hanauma Bay Nature Preserve is a place that one day I will want to bring my children to, but I can never do that if there is not something done together to stop the destruction we are seeing of coral reefs around the world. Play your part in the protection of these natural habitats throughout the world, and together we can show our children the world we grew up in.

Before you plan your trip, look for inspiration with us at To the Nations Worldwide. After your trip, share your travel photography, videos, and blogs using a personal interactive travel map. Promote your travel content throughout the website.