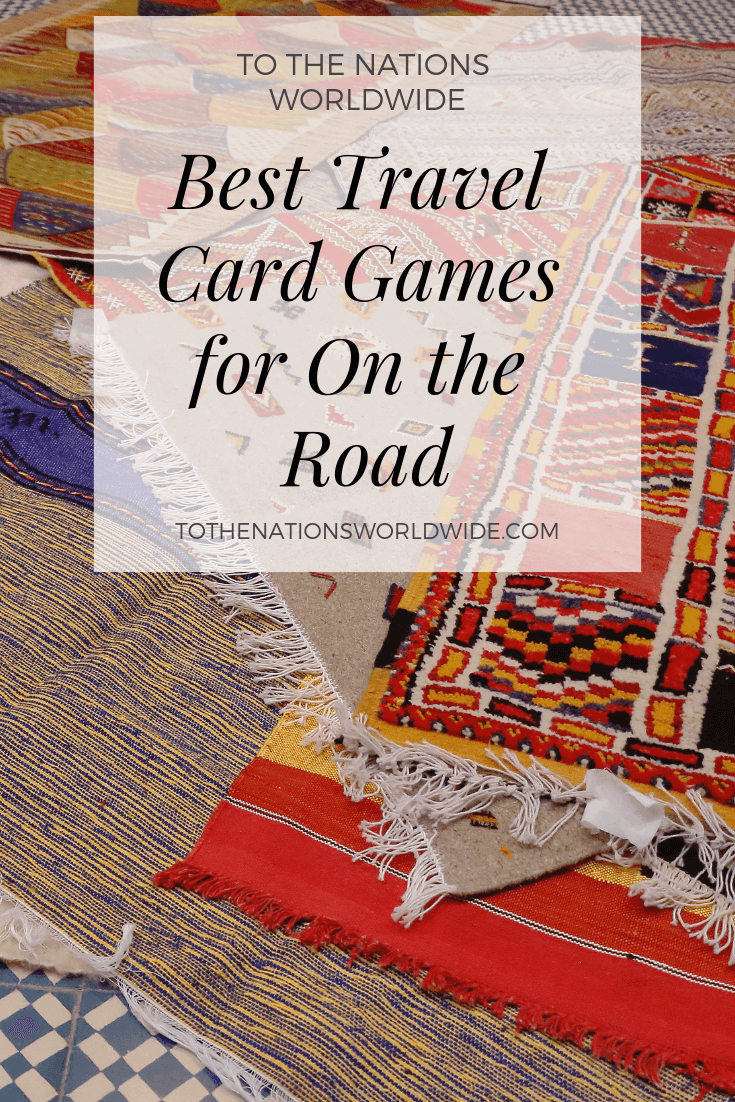 Have you ever been on a long train ride or stuck in the airport with a lot of time on your hands? Sometimes when you are traveling with somebody else or even a group of people you need something to do to kill the time and to entertain everyone.

We feel there are still a lot you can get out of a good card game that is portable and able to fit in your backpack for your next trip with friends, family, or maybe even yourself.

Here are our favorite card games that you will not worry about taking up too much space in your backpack.

The card deck is the same as a normal card deck with the addition of “Wizards” and “Jesters”. Wizards are like the trump card and they take anything, whereas the Jesters are worth nothing. So when the deck is dealt at the beginning of each hand, you need to analyze your cards and make a bid as to how many “tricks” you will win. It is then a strategic game as you try to get that amount without going over or under.

Cards are played by suit and then that suit is followed. If you do not have the suit that is played, you can play any card you would like. If you have too many “tricks” already won then maybe you want to play a high card off suit to make sure you wont win that one. Wizards and Jesters can be played at any time.

This game for three to six players makes for a great strategic travel card game that you can take with you anywhere.

In this game, the deck of cards are placed face down and players take turns drawing a card after playing as many action cards as you wish. Action cards help you by keeping you from drawing the exploding kitten card.

For example, “See the Future” helps you by allowing you to see the top three cards in the deck. The “Skip” card lets you skip your turn from drawing. A “Diffuse” card allows you to not explode if you were to draw an exploding kitten and thus remain in the game. A “Shuffle” card allows you to shuffle the deck. “Nope” cards can be played by any player at any time to stop a players action.

The maximum number of players is five, but if you buy more than one deck you can combine them and add more players.

This one is a little bit larger than the others and is more of a party game. But that can be the best way to pass the time at the end of a long night together. This is good with a group of people.

This four to eight player card game is actually meant to be “remixed” as stated in the rules and they provide lots of fun ideas.

Uno is a classic from my childhood. This two to ten player game is similar to that of crazy eights. The deck consists of four different colored cards of 1 through 9, Wild cards, Skip, Draw Two, and Reverse cards.

Cards are dealt at the beginning of each hand and the remaining cards are placed in the middle with a card flipped over at its side as the discard pile. The first player must match the color, number, or symbol of the card that was flipped over and the round continues just as that. You can play multiple cards should you have more of the same number. For example, if the color that is in the discard pile is blue and you have a blue nine and other colors of that nine, you can play all of them with the blue one being the first one down. This is how you get rid of a lot of cards.

If you cannot play any cards, then you need to pick up a card which signals the end of your turn. Wild cards can be played at any time. Do not forget to call out “Uno” when you have the last card in your hand or else you will need to draw two more cards.

Once a player is out, cards held by other players are counted as their face value with wild cards being counted as twenty points for the player who won. First player to reach 500 points wins.

Pit is one of my favorite card games of all time. This three to seven player game is a game of commodities where you try to collect all of the same commodity to win a round. There are eight commodities that have different point values such as: Wheat, Coffee, and Oil among others. In the deck are also two special cards: the Bear and the Bull.

Then, the chaos begins. This is the best part of Pit. There is no turn. When the round begins you try to trade the commodities with the cards face down and yelling out the amount of cards you want to trade. If somebody wants to trade with you and has the same amount of cards they want to trade, you can swap with them.

Also, the Bull card counts as a wild card so you likely do not ever want to trade that away. The Bear on the other hand is the one card you want to get rid of because if you are stuck with it at the end of the round you will lose points. So if you trade away the Bear, make sure you are tracking who that person is trading with so you can track who has the Bear.

These are our favorite travel card games. Card games that you can slip into your backpack and not worry about it taking up excessive room. Card games that will provide you and your travel mates loads of fun times at the end of a night out, waiting for a flight, or on a long train ride.

What card games are you playing? We would love to hear from you in the comment section below.

Research, plan, and book your travels with this guide to saving you time and money on your next trip.
Every traveler needs a travel blog to document their journey and start building their portfolio of writing, photography, and videos. This is the jack of all trades guide to creating your travel blog to start traveling the world while earning money.
Supplementing your travel blog with imagery is the best way to capture your readers’ attention. With this guide, you will be well on your way to take incredible photos and capturing those special travel moments.

Listen to the Travel Couple Podcast